Which Accessories Will Work with the GoPro HERO8 Black?

Wondering which accessories will work on the new GoPro HERO8 Black? Here’s a running list of what to look for. 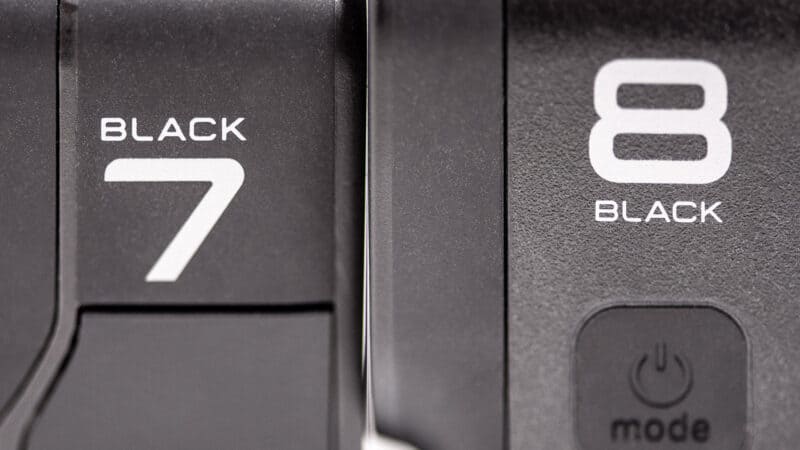 GoPro’s launch of the HERO8 Black included a lot of excitement about three new accessories especially useful to vloggers:

Some have since been released, but supplies have had a hard time keeping up with demand, especially with the disruption to global manufacturing and shipping.

But those aren’t the accessories I’m focusing on here. If you’re upgrading from a previous model and already have some accessories on hand, you might be wondering whether those work on the new model. There’s no simple answer: some do and some don’t.

Basically, there are four main considerations when trying to determine whether accessories you’re currently using with previous GoPro models will work with the HERO8 Black. I’m focusing here on upgrading from the HERO7 Black to the HERO8 Black, but there’s quite a bit of overlap with previous models. The HERO6 Black and HERO5 Black, for example, share the same body design as the HERO7 Black.

These are the general considerations with accessories for the HERO8 Black:

With those in mind, here’s how some specific types of accessories do or don’t work with the HERO8 Black.

The HERO8 Black has a new mounting method in that the attachment point is not built into the base of the camera itself. So you don’t need to use a frame or housing as you have had to do with previous models.

But it’s still the same standard 3-prong GoPro-style attachment system that you’re used to. So most accessories that rely on that mounting attachment point will work just fine with the HERO8 Black.

There are, however, occasional exceptions. There’s a relatively small number of accessories that need the camera to be in a frame (like the pistol-trigger triggers; see below).

Most of them will work because they generally attach with the standard GoPro mounting system.

Some specialized grips, like pistol-trigger grips, require a frame mount to work properly. Right now, GoPro doesn’t have their own frame for the HERO8 Black. Aftermarket manufacturers will likely make some sooner or later.

GoPro has released a new battery with the HERO8 Black. It’s the same shape, size, and power rating as the HERO7 Black, HERO6 Black, and HERO5 Black. And, technically, you can put one of the older batteries inside the HERO8 Black and power the camera with all of the same features available. You might run into issues when using the camera in very demanding conditions (eg. very hot) with high-performance modes like HyperSmooth Boost, Live Burst, and TimeWarp.

But you’ll also get an on-screen warning that to get peak performance you should be using the newer model. And it won’t work with the new battery health checker in the camera.

The new battery is also designed to be backward compatible. But before you use it in a HERO7 Black, HERO6 Black, HERO5 Black, or HERO (2018), make sure to update the camera’s firmware.

Extended Batteries. Any batteries that use a cable to attach to the [USB-C port]((also known as a USB Mini-B 5-Pin) ) will work. So external USB power bricks and batteries that act like that (such as this one, will work fine.

Batteries that clip onto the camera, like these, won’t work because the USB-C port and compartment are in different positions on the body.

One of the changes with the HERO8 Black is that there’s a single compartment with one door. Not only does the door come off rather too easily, but you can’t use it at the same time as using the USB-C port for external power. There’s an aftermarket solution with this replacement side door for the HERO8 Black.

Memory Cards for the HERO8 Black

I have a much more detailed guide to GoPro HERO8 Black SD cards. But here’s the short version . . .

Frame. The HERO7 Black’s standard frame, which comes included with the cameras, won’t fit on the HERO8 Black. The new camera doesn’t include one because it has a built-in, fold-out attachment point built into the bottom of the camera’s body. GoPro doesn’t currently make a frame for the HERO8 Black, but aftermarket manufacturers are likely to fill that gap before long.

Floats. Floats that wrap around the camera body will need to be ones designed specifically for the HERO8 Black. GoPro has released their own, recycling the Floaty name. Any pole floats or strap floats will work just fine.

Sleeve + Lanyard. I’ve found GoPro’s Sleeve useful as a light layer of protection when just out and about with hand-held shooting. But, annoyingly, the previous versions, of which I have several copies, don’t fit. They’re too small for the H8 Black’s body. Less importantly, the markings for the power button are in the wrong positions for the new camera, as are the microphone exposures. So there’s a new version just for the HERO8 Black.

There’s no cage yet for the GoPro Karma drone or gimbal.

Many clip-on filters from the HERO7 Black won’t work on the HERO8 Black. That’s because of the different lens port design.

That also holds true for filters that attach to the SuperSuit dive housing. Again, the different lens port design means that the HERO8 Black won’t work in the Super Suit—you’ll need to use the similar Protective Housing instead.

You can find GoPro’s official list of HERO8 Black accessories here. If you buy any of them from GoPro.com, it’s worth looking into the GoPro subscription program (it used to be called PLUS). One of the benefits of that program is 50% off many of the accessories.

Images and product information from Amazon PA-API were last updated on 2023-02-05 at 06:28. Product prices and availability are accurate as of the date/time indicated and are subject to change. Any price and availability information displayed on Amazon Site at the time of purchase will apply to the purchase of this product.

Which Accessories Will Work with the GoPro HERO8 Black?