Which Accessories Will Work with the GoPro HERO9 Black?

Wondering which accessories will work on the new GoPro HERO9 Black? Here’s a running list of what to look for. 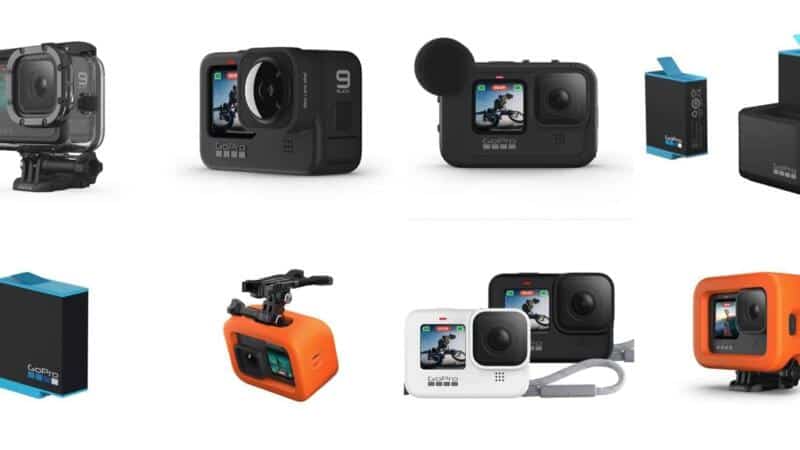 GoPro has now launched the HERO9 Black, the latest version of their flagship action camera. If you’re looking to upgrade and already have some accessories from older models, here’s my running list of what kinds of accessories will and won’t work with the new camera.

This is a running list, and I’ll try to update it as I get the chance to try out accessories on the new camera.

New Accessories for the HERO9 Black

Here are some of the new, dedicated accessories for the HERO9 Black.

HERO9 Black Media Mod. This adds an HDMI-out port, a 3.5mm external mic port, a couple of cold shoes for mounting lights or other accessories, and a built-in directional mic. The Media Mod was first introduced with the HERO8 Black, but the HERO8’s Media Mode won’t work on the HERO9; you’ll need the dedicated one for the HERO9 because of the different body dimensions of the camera.

HERO9 Black Protective Housing + Waterproof Case. It has the same specs and shares the name with the one for the HERO8 Black, but it’s slightly larger to fit the new camera.

HERO9 Black Max Lens Mod. This might be the most interesting and innovative new accessory, and I’m looking forward to putting it through its paces (but it isn’t available just yet). Unlike the HERO8 Black, the HERO9 Black goes back to the design of a removable lens hood. So you clip off the default one and clip the Max Lens Mod on in its place. It contributes to extra video stabilization, improves horizon lock, and gives an even wider (155-degree) field of view.

The Remote. When it was originally launched, there was no way to connect a remote to the camera (but you could connect the GoPro app). That’s because there’s a new remote for the HERO9 which wasn’t ready in time for the camera’s launch. But in late-2020, The Remote was launched and the HERO9 firmware was updated to add the ability to connect to it. It’s similar to the older Smart Remote. There are a few improvements: a sharper screen (for status, not live viewing) and charging via USB-C rather than the dedicated connector that the older remotes used. In a step backwards, it can only control up to five cameras at once (the Smart Remote can control up to 50). I have a more detailed review of it here.

Will HERO8 Accessories Work with the HERO9?

If you’re upgrading from a previous model and already have some accessories on hand, you might be wondering whether those work on the new model. There’s no simple answer: some do and some don’t.

Basically, there are five main considerations when trying to determine whether accessories you’re currently using with previous GoPro models will work with the HERO9 Black. I’m focusing here on upgrading from the HERO8 Black to the HERO9 Black, but there’s quite a bit of overlap with previous models.

These are the general considerations with accessories for the HERO9 Black:

With those considerations in mind, here’s how some specific types of accessories do or don’t work with the HERO9 Black. This is a running list that I’ll try to update as I come across more compatibilities or incompatibilities.

The HERO9 Black uses the same kind of built-in mounting method that was introduced with the HERO8 Black. Rather than requiring a frame, it has fold-down fingers in the base of the camera.

But it’s still the same standard 3-prong GoPro-style attachment system that you’re used to from any of the old cameras. So most accessories that rely on that mounting attachment point will work just fine with the HERO9 Black. That includes things like bike mounts, body board mounts, suction cups, chest harnesses, helmet clips, float handles, tripods, and selfie sticks.

There are, however, occasional exceptions. There’s a relatively small number of accessories that need the camera to be in a frame (like some pistol-trigger triggers; see below).

Most grips and poles will work because they generally attach using the standard GoPro mounting system.

Some specialized grips, like pistol-trigger grips, require a frame mount to work properly. Right now, GoPro doesn’t have their own frame or cage for the HERO9 Black. Aftermarket manufacturers will likely make some sooner or later.

The Remote. When it was originally launched, there was no way to connect a remote to the camera (but you could connect the GoPro app). That’s because there’s a new remote for the HERO9 which wasn’t ready in time for the camera’s launch. But in late-2020, The Remote was launched and the HERO9 firmware was updated to add the ability to connect to it.

It’s similar to the older Smart Remote. There are a few improvements: a sharper screen (for status, not live viewing) and charging via USB-C rather than the dedicated connector that the older remotes used. In a step backwards that won’t make a practical difference to most shooters, while it control multiple GoPros, it can only control up to five cameras at once (the Smart Remote can control up to 50).

If you don’t see the option to connect a remote in the camera’s menu system, make sure you’ve upgraded the firmware to at least v1.5 (released 12/17/2020).

Internal Batteries. One of the key upgrades of the HERO9 Black is a larger battery. The new battery is rated for 1720mAh (compared to 1220mAh for the HERO8 Black). You can find it here.

GoPro claims that the new higher-capacity will give you 30 percent more shooting time, which makes sense given the relative increase in capacity. In practice, of course, how much extra shooting time you get in real-world conditions is going to depend on a host of other factors–even things like outside temperature make big differences in the performance of lithium batteries.

So there’s a new battery specifically for the HERO9 Black, and you can’t use the older battery in the new camera or vice versa.

That also means that your old dual battery charger won’t work (you can still charge the battery with it inside the camera). So there’s a new one for the HERO9 Black batteries.

Extended Batteries. Any external batteries that use a cable to attach to the USB-C port will work. So external USB power bricks and batteries that act like that (such as this one, will work fine.

Batteries that clip onto the camera, like these, won’t work because the USB-C port and compartment are in different positions on the body.

Memory Cards for the HERO9 Black

I’ve now had a chance to test out a number of SD cards in this camera and have put together some detailed SD card recommendations for the GoPro HERO9 Black.

Most housings and frames from the HERO8 won’t work with the HERO9. The main issue is that the new camera is slightly larger. I have a more detailed post on dimensions of the HERO9 Black separately.

Dive Housing. The new dive housing for the HERO9 Black shares the name of a couple of other previous models: the Protective Housing. Well, technically, it’s the HERO9 Black Protective Housing + Waterproof Case. The name raises the question of whether the camera is waterproof, but rest assured that that the camera is waterproof without a housing (33ft/10m). This adds extra protection if you want to dive deeper underwater (196ft/60m).

It’s also very useful if you want an expendable protective shell around your camera (it’s cheaper and easier to replace a cracked external housing than to replace the whole camera). It’s rated for depths down to 196 feet / 60 meters, the same rating as other dive housings. It comes with a skeleton back door, which is no good for deep diving but exposes the back touch screen for easier access (though the touch screen controls still won’t work underwater) and less fettered onboard microphones. You can find it here.

Floats. Floats that wrap around the camera body will need to be ones designed specifically for the HERO9 Black. Again, that’s because of the different body dimensions.

GoPro has released their own, recycling the Floaty name. The design is very similar to the one for the HERO8 Black, with some small tweaks.

The Floaty is also included with the Bite Mouth Mount, useful for surfers (the bite mount part isn’t new, but the Floaty it’s bundled with is).

There’s no official cage yet for the GoPro Karma drone or gimbal, and my bet is that this is something that will be left to aftermarket manufacturers.

Many clip-on filters from the HERO7 Black or earlier won’t work on the HERO9 Black. That’s because of the different lens port design.

That also holds true for filters that attach to the SuperSuit dive housing. Again, the different lens port design means that the HERO8 Black won’t work in the Super Suit—you’ll need to use the similar Protective Housing instead.

But PolarPro has already released some new dive filters and drone/ND filters that are designed for HERO9 Black’s new Protective Housing.

And if you buy any of them from GoPro.com, it’s worth looking into the GoPro subscription program (it used to be called GoPro PLUS). In addition to unlimited cloud storage and discounted camera replacement, one of the benefits I use most is that it offers significant discounts on many of the accessories bought through GoPro.com’s store.

Images and product information from Amazon PA-API were last updated on 2022-12-06 at 22:38. Product prices and availability are accurate as of the date/time indicated and are subject to change. Any price and availability information displayed on Amazon Site at the time of purchase will apply to the purchase of this product.

Which Accessories Will Work with the GoPro HERO9 Black?