A rundown of the GoPro HERO9 Black batteries, chargers, and compatibility options. 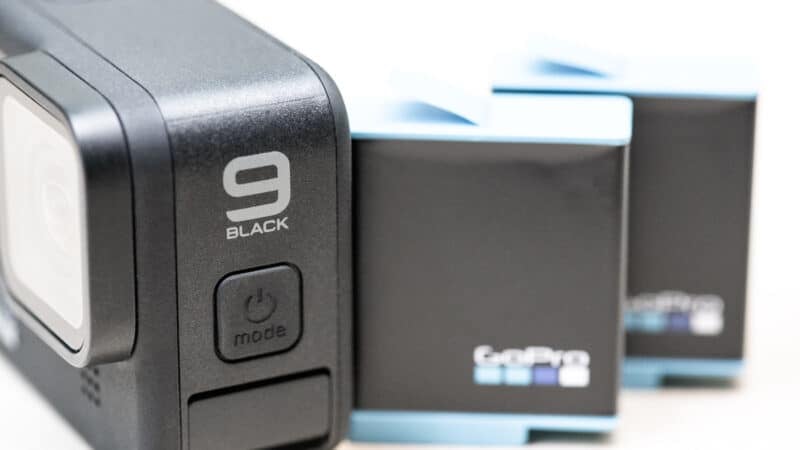 Now that GoPro has released the HERO9 Black, you might have questions about its battery and charging. Whether you’re looking for spare batteries, replacement batteries, or better ways to charge them, here’s a rundown of what I hope are helpful answers about the HERO9 Black’s batteries, chargers, and compatibility.

The first thing to know is that while the batteries for the HERO9 Black and HERO8 Black look similar, they’re not the same, and you can’t use them interchangeably.

What that means in practical terms is that the HERO9 Black batteries are not interchangeable with the batteries for the HERO8 Black. It looks similar, but it’s not the same–they won’t fit.

The larger battery capacity also adds the potential for longer shooting times. GoPro is claiming “30% more battery life,” but whether you see that much improvement in real-world shooting is going to depend on what shooting modes you’re using and environmental factors like ambient temperature (lithium batteries don’t perform well in very cold or very hot conditions). I hope to post some side-by-side tests here soon.

UPDATE: Since I originally posted this, GoPro has released the HERO10 Black. The HERO10 Black and HERO9 Black use the same batteries.

There are now two official batteries for the HERO9 (as well as an external option–the Volta–but that’s in a different category).

The original GoPro-branded battery for the HERO9 Black is a 1720mAh lithium-ion rechargeable battery. Its model number is ADBAT-001. It’s the same battery used by the newer HERO10 Black.

For now, at least, they’re not all that widely available at retailers, but you can find them in a few places.

Aftermarket versions are also available. They can often be much less expensive. In my experience, many of them perform very well, but there’s always the risk of lapses in the third-party manufacturer’s quality control: 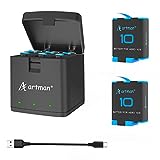 What to look for: Make sure that the battery is specifically for the HERO9 or HERO10. Batteries designed for earlier GoPro models will not work in the HERO10.

GoPro later released a new battery for the HERO10 and HERO9 known as the Enduro. Its main appeal is that it offers improved performance in cold conditions (lithium-ion batteries don’t perform well in very cold or very hot conditions).

“Batteries are like humans,” says Anna Stefanopoulou, director of the University of Michigan’s Energy Institute. “They prefer the same sort of temperature range that people do. Anything below 40 or above 115 degrees Fahrenheit and they’re not going to deliver their peak performance. They like to be around 60 to 80 degrees.”

While the Enduro was originally released tied to the HERO10 Black, it’s also backward compatible with the HERO9 Black.

You can find them at GoPro.com and Amazon.

The difference in the physical size of the batteries also affects external chargers. These aren’t essential—you can still charge the battery inside the camera—but they do make things more convenient if you’re working with multiple batteries.

Again, the main one that’s available is the GoPro-branded version, but there are also aftermarket versions. They’re often sold with multiple spare batteries, so they can be especially good value.

Charging the battery in the camera. The simplest method of charging GoPro HERO9 batteries is to leave the battery in the camera and connect the camera to a USB power source. It can be a wall charger, a USB power brick, or even a car charger. Assuming you have some other kind of USB power source on hand—and these days, chances are you’ve got a bunch of them already—this method doesn’t require any extra accessories. The camera comes with the USB-C power cable that you need.

While it’s convenient, there’s a couple of downsides to this method. You can only charge one battery at a time, and it puts the camera out of action while you’re charging. 1

Not all USB power sources will charge at the same speed, however. For the fastest charging, you’ll want a charger or power source that’s compatible with the fast-charging capability of the HERO9 Black. The most reliable option for this is GoPro’s own Supercharger, but there are many other AC chargers, USB charging hubs, and power bricks that will also provide this. And if you don’t have one of these newer, faster chargers, the battery will still charge—it just won’t be at the fastest speeds possible.

Using an external battery charger. The GoPro HERO9 Black doesn’t come with an external battery charger as standard (it’s possible that some retailer bundles might include one, but that’s not standard). But you can pick them up separately. If you’re after peace of mind, the GoPro-branded Dual Charger is the safest bet. And while it will work with any standard USB power source, you can pair it with a Supercharger for the fastest charging.

There are also aftermarket cradle chargers starting to appear on the market, but they’re not yet widely available at the time of writing.

The big advantages of this method are that you can charge two or three batteries simultaneously, and you can also be charging a spare (or spares) while continuing to shoot with your GoPro. The disadvantage is that it means an extra accessory. 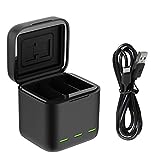 You’ll need to remove the battery to see the HERO9’s serial number, which is behind it.

I’ve put together a separate post on maximizing the battery life of a HERO10 Black. The same tips apply to the HERO9.