What is GoPro LiveBurst & When to Use It?

LiveBurst is one of the newer features on recent GoPro cameras designed to capture fast action. Here’s how it works and when to use it (and when not to). 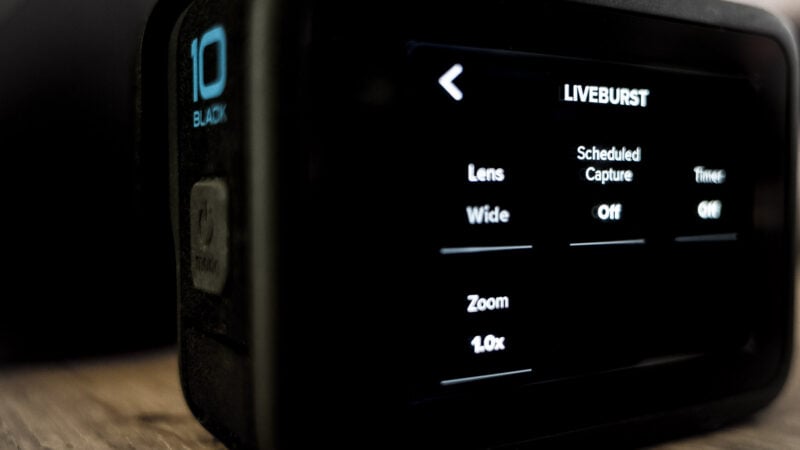 Burst Mode has been a staple of GoPros since the earliest models. It takes a rapid sequence of photos, and it’s especially good for capturing fast-action shots. It’s something I’ve covered in more detail separately.

LiveBurst is a newer feature. It was first included on the HERO8 Black. And the cameras that have LiveBurst available also have Burst Mode. So what’s the difference?

There’s quite a lot of overlap between Burst Mode and LiveBurst in terms of the types of situations where they’re especially useful. 1

In general, they’re great for fast action where you want to be sure to get the critical moment or the ideal shot. Both shoot a rapid sequence of shots. But they work slightly differently.

Burst mode takes a series of still images over a preset duration. Some examples might be 30/1, which takes 30 photos in 1 second. Or 10/2, which takes 10 photos over 2 seconds. The output from Burst Mode is a series of photos (on older models, it was JPG-only; newer models can also output RAW (.gpr)).

LiveBurst can output a still image. Or you can choose to output it as a short video clip. The way it works is that the camera is actually generating a 4K 30fps video clip. If you choose to export a still image, it saves a single frame from that video.

But the key feature of LiveBurst that makes it most useful is that it pre-rolls. In other words, it actually starts recording 1.5 seconds before you press the shutter. And it continues for 1.5 seconds after the shutter is pressed, taking a total of 90 frames. That greatly increases the chances that you’ll capture precisely the moment you want.

There are several benefits to using LiveBurst, and it’s an interesting way to capture critical action. It’s quite intuitive to use, and the pre-roll, in particular, makes it a reliable way to make sure you don’t miss the shot.

But there are also some downsides to using it rather than Burst Mode. The first two are the biggest negatives for me and the reasons I usually choose Burst Mode instead.

Somewhat frustratingly, there’s no way to export a LiveBurst directly from the camera. There are often times I’d like to just choose the frame on the camera and export that as a still image.

Instead, you have to use the GoPro Quik mobile app. First, view the camera’s media through the app. You can then select an individual frame to export as an image or save the clip as a 3-second video file (you can do the same if you download the LiveBurst to the app’s media folder, too).

You can also go the old-school manual route and download the memory card’s data to your computer.

The LiveBurst will show as a regular MP4 video file. So if you want to export an individual frame, you’ll need to use your video editing app’s tools to do that (in the GoPro Quik for Desktop app, it’s the Grab a Photo tool on the bottom panel).

LiveBurst is found under the Photo functions (not under Video).

There’s another similar feature on some models called Continuous Photo or Continuous Capture. It’s most similar to Burst Mode, with the key difference being that the duration of the capture is determined by how long you hold the shutter down rather than a preset duration.

LiveBurst can be used in combination with Zoom, Scheduled Capture, and the self-timer. It’s not compatible with SuperPhoto or HDR.

When you play back the LiveBurst on the camera, it starts at the middle frame (45/90), which is the point at which you pressed the shutter. You can move forwards and backward from this point to find the frame you want.

Which GoPro Cameras Have LiveBurst?

LiveBurst is a relatively new feature on GoPro cameras. It’s available on these models:

What is GoPro LiveBurst & When to Use It?