Can You Use a UHS-II SD Card in a GoPro?

The fastest microSD cards available today are UHS-II cards. But the current crop of GoPro cameras aren’t able to use them to their full potential. 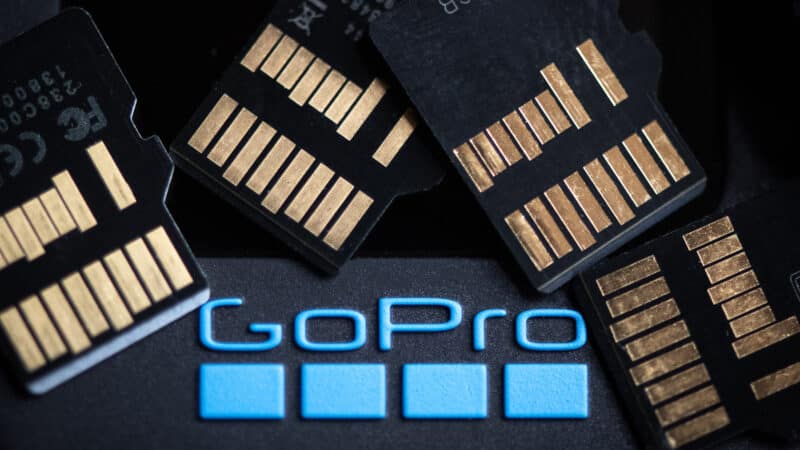 Yes, you can use a UHS-II microSD card in a GoPro camera. It’ll work just fine.

But there’s another closely related aspect to consider.

Will You Get Any Benefit from Using a UHS-II over a UHS-I microSD Card in a GoPro?

So here’s the thing about UHS-II: it will only work as UHS-II if both the memory card and the host device support UHS-II. If one or the other is UHS-I, it effectively renders the system UHS-I.

The UHS-II technology is designed in such a way that it rolls back gracefully. What that means is that if you put a UHS-II card into a UHS-I device, it will work just fine. You just won’t get the extra speed benefits that a fully UHS-II system can bring–it would be just like putting a UHS-II card in.

Why NOT to Use a UHS-II Card in a GoPro

A UHS-II microSD isn’t a bad choice for a GoPro. It’ll work just fine. And there’s nothing wrong with doing it, if that’s what you want to do. You’re not going to break anything.

But while you can use a UHS-II card in a GoPro, the main reason not to is price. UHS-II are usually more expensive than UHS-I cards (there are exceptions, and that doesn’t account for retailer special deals). So you’re paying a premium for a faster card that your camera can’t take full advantage of.

Of course, if you already have the UHS-II on hand, that’s a moot point. In that case, by all means, use it.

Why to Use a UHS-II Card in a GoPro

A UHS-II card won’t give you any extra speed benefits when using the GoPro. It won’t help you take better photos or improve image quality.

But the in-camera shooting is only one part of the workflow, and there still might be an argument in favor of using a UHS-II card. It really depends on your particular gear and workflow.

And that is when downloading footage or photos to your computer or backing up to an on-location backup device. If your memory card reader or backup device is UHS-II, you’ll probably see faster download speeds.

Do Any GoPro Cameras Use a UHS-II Interface?

Not so far. At least up to the HERO10 Black, which is the current model at the time I’m writing this.

But it seems very likely that some future GoPro will use a UHS-II interface, especially once the shooting resolutions start breaking into 8K territory. That’s probably not going to happen with the HERO11, but it does seem like a natural evolution that will come at some point, even if it’s a few models down the road.

The UHS standard was created by the SD Association, the organization that controls the Secure Digital format and technology.

When talking about SD cards, there are various types of speed. There are transfer speeds, and there are rating systems to go along with those. There’s a Video Speed Class rating that refers to the sequential write speed of a card and denotes its suitability for particular types of video recording in cameras. There’s a new Application Speed Class (eg. A1 or A2) that refers to a different type of write speed that’s most relevant to gaming and computing devices.

UHS-I and UHS-II aren’t rating systems, as such–they’re a type of interface technology. Specifically, it refers to bus speed and stands for ultra-high speed bus.1

How Do You Tell the Difference Between UHS-I & UHS-II?

There are two simple ways to tell the difference between a UHS-I and UHS-II microSD card.

One is on the packaging. It might have UHS-I or UHS-II printed on it. More likely is that it’ll have just a “I” or “II”.

Can You Use a UHS-II SD Card in a GoPro?