Remote for the GoPro HERO10/9/8 Black – The Remote Review

GoPro has a new remote–it’s simply called The Remote. It’s compatible with the HERO10, HERO9, HERO8, and MAX. Here’s what it can do and how it works. 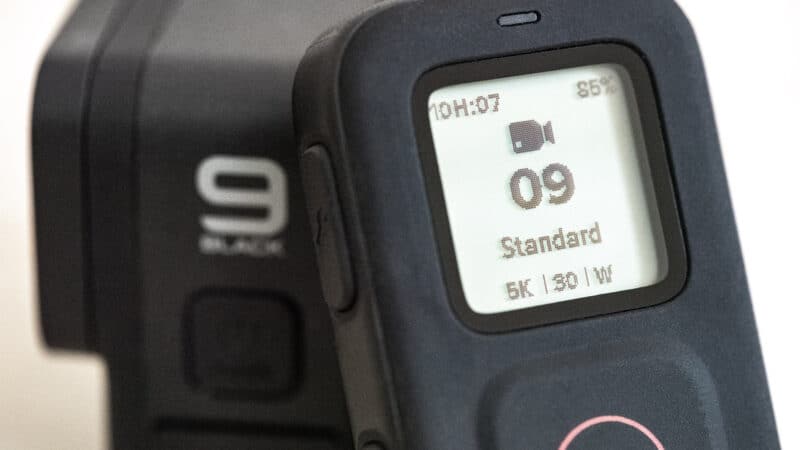 There have been a few different GoPro remotes over the years. The original was the Wifi Remote. Then the Smart Remote, which has been the best and most reliable until recently. Then the Remo, which was a small waterproof button that included voice control but left something to be desired in terms of reliability.

It was launched in mid-December 2020 specifically to work with the HERO9 Black. That’s important because unlike most other GoPro models, the HERO9 Black won’t work with the Smart Remote, and the initial launch version of the camera’s firmware didn’t include the ability to add a remote connection beyond the GoPro mobile app. (If you do not see the option to add a remote on your HERO9 Black’s menu system, make sure to update the camera’s firmware to at least v1.5.) Firmware updates also enabled compatibility of The Remote with the HERO8 Black and MAX cameras; more on that below.

Now that I’ve gotten one and had a chance to use The Remote, here’s a rundown of what it does and how it works.

The Remote was released for the HERO9 Black, and if you’re using that camera, this is currently the only compatible remote for it. But you can also use The Remote with the HERO8 Black and MAX cameras. Compatibility was added in firmware updates for those cameras, so you’ll need to update your camera’s firmware if you haven’t recently.

Compatibility was added in HERO8 Black firmware update v2.50 (December 17, 2020). You can find the latest version of the firmware here.

The Remote is compatible with the HERO9 Black, HERO8 Black, and MAX. (Make sure to be using current firmware; compatibility was added through a December 17, 2020 firmware update after the cameras’ release.)

It’s rated as waterproof to 16 feet / 5 meters. But, just like other wireless remotes, it won’t work underwater, which is a limitation on wireless signals through water, not the remote itself.

GoPro claims that its range is up to 196 feet (60 meters) in optimal conditions. Many of us don’t shoot in optimal wireless conditions, so we can expect the real-world range to be somewhat less than that.

It has a built-in, non-replaceable rechargeable battery and charges via USB-C (it comes with a cable but not a charger). This is much more convenient than the unique dedicated charging attachment that some older GoPro remotes have used.

It has glove-friendly buttons. This is useful in cold conditions, obviously, but also for trail biking or other activities that require gloves. Basically, it means that the buttons are spaced out. There’s a single, large shutter/record button on the front and the mode button is on the side. Those are the two buttons you’re likely to be using most often.

It has a crisp monochrome screen that displays shooting status and menu commands. The screen is not a touchscreen, and it’s not a live view screen.

The pairing is pretty straightforward and works much the same way as previous remotes. But you’ll need to make sure that you’re using recent firmware. When the HERO9 Black was launched, it didn’t have the ability to connect remotes. That feature was added with firmware release v1.5, which was released on December 17, 2020.

To pair with your camera:

After you’ve done the pairing process once, they’ll automatically connect when they’re both powered on.

If they fail to connect, make sure that the camera’s wireless connection is enabled. Find this under Preferences > Connections > Wireless Connections. It’s worth noting that leaving the wireless feature enabled will contribute to some power drain of your camera’s battery.

There are four buttons. On top is the power button. It’s straightforward. Just press to turn on. To turn it off, hold the button for two seconds.

On the front, with a red circle on it, is the large shutter/record button.

And on the side is the settings/preset button and a shooting mode button. The mode button cycles through the capture mode such as video, photo, time lapse, etc.

Once you’re in the shooting mode you want, you can use the presets button to cycle through the available presets. It’s the button with the wrench/spanner icon. It’s important to know that you can’t edit the presets with The Remote; you’ll have to do that on the camera or through the GoPro mobile app. But it’s nice that you can select the presets. That includes things like Burst or LiveBurst when shooting photos.

The charging port is on the bottom and is covered by a rubber port door. When you connect The Remote to a USB power source, the front screen should show a charging indicator.

On the back is a slot for the wrist band or another strap. And there are tiny holes that you can use to attach a lanyard, light hand strap, or tether.

It doesn’t come with an AC wall adapter, but you can use the usual array of USB power sources you already have on hand.

Your camera won’t connect to The Remote and the GoPro mobile app at the same time. It’s one or the other.

There are some things that you can’t do while The Remote is actively connected with the camera:

If you’re in the habit of using the HiLight Tag feature to quickly find specific moments in your footage, you can use The Remote to create the tags. While you’re recording or playing back, press the Mode button.

As usual with wireless remotes, I’ve found that there is a slight lag between pressing the shutter and the camera responding. In many cases, this isn’t a big enough lag to be an issue. The main time I notice it is when taking photos of fast-moving action. Using burst mode and slightly pre-empting the moment is one workaround. Another option is to use the new LiveBurst option. Neither is ideal, because both end up with a bunch of images you’ll need to sort through. And there are some limitations with LiveBurst, such as limited to 8MP or 12MP images (rather than the full 20MP of the HERO9 Black).

The LCD screen isn’t backlit, so if you’re shooting in the dark, you’ll want a flashlight or phone light to be able to see the screen.

Where to Find The Remote

The rollout for The Remote was quite slow (presumably in part because of global shipping shortages during the COVID-19 pandemic). But they’re more widely available now.

Images and product information from Amazon PA-API were last updated on 2023-02-04 at 21:38. Product prices and availability are accurate as of the date/time indicated and are subject to change. Any price and availability information displayed on Amazon Site at the time of purchase will apply to the purchase of this product.

Remote for the GoPro HERO10/9/8 Black – The Remote Review