While GoPro's Jaws clamp works well in many situations, there are times a broader spring-loaded clamp comes in handy in mounting your GoPro. One of the great things about shooting with GoPro cameras is that you can mount them almost anywhere. If you have the right kind of mount for the purpose, that is. There’s a vast range of options available.

The one I’m focusing on here combines a spring clamp with a flexible gooseneck arm. It’s lightweight, versatile, and quick. It’s better suited to putting in positions that will stay still. In high-movement situations, the clamp might be jolted off, and the flex in the gooseneck will become a problem. I like to use this one on railings, handlebars, tree branches, that are handy. 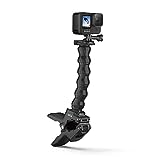 GoPro Jaws: Flex Clamp (All GoPro Cameras) - Official GoPro Mount
Check Price on Amazon
Before GoPro came out with their own GoPro’s own Jaws Flex Clamp, I was making my own spring-loaded clamp setup by modifying hardware clamps. The Jaws clamp works best on mount points it can go around, like a rollbar or round railing. There are situations that it doesn’t work so well because of its narrow mouth–it doesn’t grip well in situations where there’s going to be any lateral force–you can end up with lateral sway as the grip gives way laterally.

In those instances, you risk it rotating a bit. What’s needed is something with a broader clamp base so that it can get a better lateral grip. I’ve been using a Manfrotto 175 Spring Clamp for that. It works reasonably well and has a much broader clamp base. But it has two shortcomings. One is that it doesn’t come with an articulating gooseneck (or any other ways to attach a camera to it, for that matter–you have to sort those out separately). And the grip comes down to rubberized buttons spread on either end of the clamp. 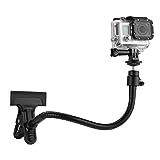 CamKix Clamp Mount Compatible with Gopro Hero 8, 7, 6, 5, Session, Hero 4,...
Check Price on Amazon
But there’s an alternative that I like better. It doesn’t replace the GoPro Jaws, but it makes a nice complement.

It’s the CamKix Dual Function GoPro Clamp. It’s a combination wide-base spring clamp with an articulating gooseneck and lightweight ballhead. And it comes standard with a GoPro attachment adapter. The CamKix clamp has a 3-inch base, and the jaws open up to a little over 1.5 inches. The spring is quite strong, and rubberized shields along the clamp base add more lateral grip than the Manfrotto option.

The 10.5-inch flexible gooseneck is detachable. With the ballhead and GoPro adapter attached, the full gooseneck will give you about 14 inches of adjustable reach. On the end of the gooseneck is a small ballhead that offers more flexibility in angling the shot.

The metal gooseneck doesn’t look very strong, but they’ve put some effort into making it strong and yet lightweight. They’ve done a good job–it holds its shape remarkably well considering how lightweight it is. I wouldn’t use it on a regular camera, but with a GoPro, it works very well indeed.

If you use the gooseneck on anything that’s moving, you’re going to get some bending. It’s not much good for something that’s bouncing with any force, like a snowboard or bike, but it works well in stationary (so long as there’s not a strong wind). In those situations where bouncing or strong winds are an issue, you can remove the gooseneck and attach the camera directly to the clamp, with our without the ballhead. That doesn’t give you the same reach and flexibility, for obvious reasons.

Overall, the package is surprisingly robust. I’d probably prefer the gooseneck to be about half the length so as to help with stability, but the extra length does admittedly open up some additional mounting possibilities in calm conditions and stationary uses. And I like the ability to attach the camera directly to the clamp, which is how I tend to use it more often.