GoPro Sticks with a Difference

These aren’t your everyday run-of-the-mill GoPro selfie sticks. Each offers something unique that sets it apart. 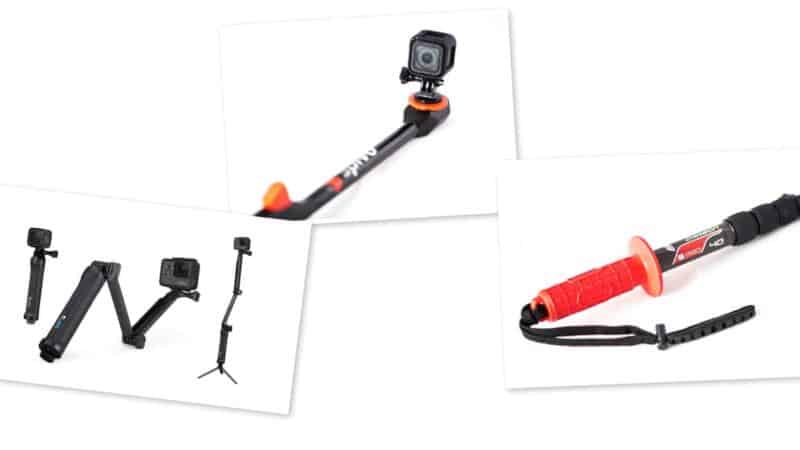 I’ve recently been trying out some GoPro sticks that are a bit different from the run-of-the-mill ones. 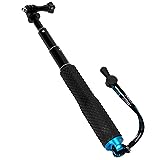 But there are also some out there that offer something a bit different. Some of the differences are in construction. Some are in features. Here are some examples of what I mean.

All of these work with any of the GoPro cameras, including the HERO10 Black. 1

Most camera sticks are made of either plastic or low-grade aluminum. UKPro is a California company that focuses on GoPro accessories at the premium end of the market, and the thing that sets the Carbon Pole 40 apart from most others is that it’s made of carbon fiber. That makes it lighter and stiffer than equivalents made of plastic or aluminum, the same reasons I prefer carbon travel tripods.

It’s part of UKPro’s Pole Mount System that includes dual and pivot mounts as well as something they call the Space Station, which lets you mount up to four GoPros together (facing in different directions). It’s a telescoping pole that extends the same way that many tripod legs do these days, with twist locks. As with any twist lock system–or pretty much any other telescoping system lock, for that matter–you do have to be a bit careful about sand or grit getting in there and fouling things up, but with a bit of care and rinsing, that’s not too much of an issue.

There are four sections. It collapses down to 14 inches, making it easy to throw in a backpack, and fully extended, it reaches 40 inches. It weighs 0.6 lbs. And it has a very substantial and handle grip that’s easy to grip even with cold and wet hands or with gloves (and it’s bright red to spot it easily if you drop it in snow or in the water).

Despite the company name, it’s made in the USA (with some foreign-made parts).

UKPro sent one to test out, and lately, it’s become the one I’ve found myself reaching for most.

In hand, it feels like the premium product it is. It folds down very small, and I’ve found the twist locks to work well. Do you really need a carbon fiber GoPro stick? In many cases, perhaps not. But there are times you appreciate the extra rigidity and minimal weight to carry when traveling. It’s available at Amazon. 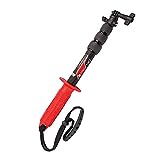 The Spivo Stick is put out by a Canadian company, Spivo. (It’s also made in Canada.) The name has been tweaked more recently, and you’ll now often seen it named the Spivo 360.

The headline feature of this one is that it pivots 180° with each click (push it twice, and you get the 360° of the name). There’s a button on the handle that you can push to have the camera do a whip rotation to face the other direction.

It’s really designed for times you might want to quickly switch from filming yourself in the action to filming your surroundings. Think of surfing or snowboarding, for example, where you might want to catch yourself in the frame but also want to show where you’re going, but where it’s not practical to manually rotate the camera around with your hands.

The button on the handle spins the dial at the other end that the camera mounts on. It’s a quick, whippy spin 180°, and while it isn’t quite as snappy as a single-frame cut you can get in post-editing the footage, it does mean that you can minimize missing any action, and the transitions can easily be trimmed out in editing. The rotation is only in a clockwise direction; that is, every time you click the button, it rotates 180° clockwise.

It’s made of lightweight plastic, and it’s waterproof. (It doesn’t float, but here are some that do.).

It’s a mechanical mechanism, so it works just as well underwater as above water. It comes with a wrist strap. It comes in three versions: Small (12 inches), Medium (18 inches), and Large (26 inches). They’re not extendible.

Spivo sent me the Medium to check out, and it’s a good comfortable size to work with while still being long enough to provide a good working distance from the camera. It’s available directly from Spivo.

A similar alternative is this one from Meinuoke. 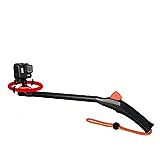 Fully collapse, it’s a handle. Extended, it becomes a selfie stick. And you can then splay some small legs on the bottom and use it as a lightweight tripod/monopod (with realistic expectations of its stability, of course).

If you’re after a versatile solution to several problems, this is a good option. That versatility makes it especially well-suited to taking with you when traveling.

You can find it at GoPro.com, Amazon and other major retailers. You can also find less expensive third-party versions.

It’s different from most of the other waterproof float poles. It’s very compact when retracted (about 6 1/2 inches / 17 cm) but extends out to 23 inches (58 cm). So it’s more like a standard handle grip/extension pole, but the difference, in this case, is that it still floats, which is the unusual part, and important if you don’t want your GoPro to end up at the bottom of the ocean. So it’s a great option for anything from swimming to surfing to boating to snorkeling or diving.

Images and product information from Amazon PA-API were last updated on 2023-02-01 at 07:48. Product prices and availability are accurate as of the date/time indicated and are subject to change. Any price and availability information displayed on Amazon Site at the time of purchase will apply to the purchase of this product.

GoPro Sticks with a Difference