My Pick for the Best GoPro Trigger Grip

Using a pistol trigger with a GoPro provides a comfortable grip and a more precise way to operate the shutter. Here’s a roundup of the best trigger grips I’ve come across. 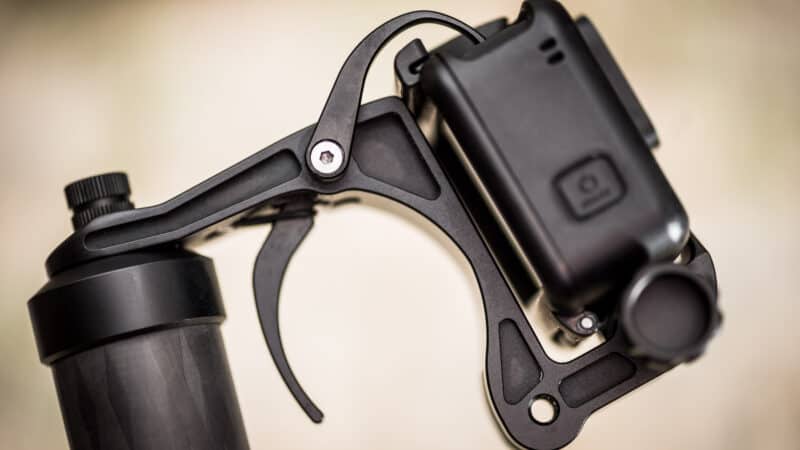 There are many, many different ways to hold and mount GoPros. It’s one of the defining features of them–that you can use them in places other cameras can’t go.

One of my favorites for hand-held shooting is to use a trigger grip. You can certainly get trigger grips for other cameras, including full-size DSLRs. But they tend to make big, heavy cameras bigger and heavier. They work well in the water, where the weight of the camera is supported by the buoyancy of a waterproof housing, but they can be two-handed affairs out of the water.

But with a tiny, light camera like a GoPro, they’re much less cumbersome. And an advantage is that, in at least some cases, the tube hand grip is floaty enough to keep the whole rig on top of the water.

The key characteristic of these is that they use a pistol-style trigger to depress the shutter/record button. I find them particularly useful for shooting photos, where you want to be able to catch a precise moment. The combination of the comfortable grip angle and the leverage from the trigger mechanism makes for quicker and lighter shutter operation.

I find that pistol trigger grips like these have fewer benefits for shooting video. That’s mainly it’s less important with video to have such a precise shutter press. And when using them for video, I’ve occasionally bumped the shutter to accidentally stop a recording prematurely. But triggers can still be a useful way to hold the camera when filming video.

Triggers are often used in tandem with dome ports, and some of the models include the mounting point for a dome on the top.

While there isn’t a huge range of pistol triggers for GoPros available, there are a few. I’ve tried out some of the major ones, and my thoughts on them are below.

One issue all of these run into is that all of the ones I’ve seen so far obscure the camera’s back screen to some extent. This blocking of the screen is an issue for two reasons. Firstly, for using the live view screen to compose the shot. Secondly, it means you can’t access or use the menu system. And while the side button on the HERO7 Black provides some limited functionality such as switching between major shooting modes, the only other way to change most of the settings is remotely through the GoPro mobile app. Making it worse, none of these triggers have a quick-release mechanism, which means that if you want to change the settings using the camera’s back screen, you’ll need to remove the camera from the trigger by undoing the locking bolt and then pulling the camera out of the bracket. It’s easy enough to do, but it’s neither quick nor convenient if you’re out shooting. One of the models below uses an offset design that makes more of the back screen visible, but it still doesn’t provide access to the entire back screen and isn’t useful for accessing the menu system.

I’ve been using these triggers with the GoPro HERO8 Black and HERO7 Black. These have fundamentally the same body design as the HERO6 Black and HERO5 Black, so they’ll also work with those models, along with the HERO7 Silver and White. You’ll need to use the frame housing that comes with the camera because that’s what adds the camera’s mounting point. If you’re planning to use it in tandem with a dive housing, be warned that some of these don’t work with those types of housings.

These triggers won’t work with the cube-shaped Session models. They might work with some other action cameras with a similar layout such as the Akaso and Yi and DJI Osmo Action, but that will very much be on a case-by-case basis.

I’ve used these Telesin triggers before with the dome ports, but you can also use it (and buy) as a standalone trigger.

They’re made of plastic and relatively bulky, but they also work reliably and effectively. It’s a simple mechanical design that doesn’t create many opportunities for things to go wrong or break.

And one of its key features is that it floats with the camera installed. Another is that you can remove the trigger mechanism part and use it as a standard bobber floating handle. You can also remove the cap at the bottom of the handle to open a small watertight compartment.

When the camera is installed, much of the back screen is obscured.

Overall, it’s the one I reach for most often when I need a trigger that floats.

The Freewell Pistol Trigger grip for GoPros takes the cake for build quality. There’s barely a hint of plastic in sight. It’s very nicely crafted of carbon and aluminum. It even comes in a good-quality case.

The aluminum is not just for looks, though. Being much stronger, it allows the trigger mechanism to be smaller and trimmer than the plastic alternatives, which is good for packing in a travel kit. The overall effect is that this is a relatively minimalist design that’s quite precisely crafted.

Whereas the competitors have designed their handles to be standalone floating grips that you can attach a camera to without using the trigger mechanism, the FreeWell doesn’t have that. In fact—and this can be a major issue, depending on how you plan to use it—it doesn’t float at all.

There are also three small black rubber rings. It wasn’t immediately clear to me what they’re for—they look like small o-rings for water sealing. But it turns out they’re replacements for the small rubber band for the trigger mechanism.

If I have to find a quibble with it, it’s that the carbon handle is a bit slippery when wet. And since this is something I want to use in the water, that can be an issue, although admittedly a minor one.

Something worth knowing is that it’s not compatible with the Super Suit dive housing.

Overall, this is the trigger I reach for when I don’t need one that floats.

This one is the most disappointing because it has one important feature that has the potential for giving it a significant edge over its competitors. And that is that the camera mounts with an offset that exposes more of the back screen to view. So while you can’t see the entire screen, you can see much more of it, which is useful for framing the shot. And you can operate some menu items, although not ones that use the right side of the screen.

Unfortunately, it’s let down by its cheap construction quality. It’s mostly a similar design to the Telesin trigger, but somewhat flimsier in the trigger mechanism. The most significant result is that the trigger mechanism itself is unreliable. For me, it doesn’t line up precisely with the shutter button on the HERO7 Black 1, and the lever is quite spongy. So you’re never quite sure that pulling the trigger will actually fire the shutter. That’s a rather important dealbreaker for me, and it’s a shame, because I really like the offset approach that opens more of the back screen to view.

You can unscrew the cap at the bottom of the handle to open a watertight compartment in the handle tube.

It comes with the trigger and grip, a few locking screws, and a small, lightweight, flexible tripod. There’s also a wrist-strap pre-attached. It comes with no instructions whatsoever, and it took me a few minutes to figure out how the handle attaches to the trigger mechanism. Once that’s sorted, it’s straightforward. 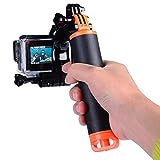 There are a few triggers available, but none of the ones I’ve tried is a slam dunk for me. The ones that are available aren’t bad, but it seems like a product category that has plenty of opportunities for some creative product engineers to come up with some creative improvements to the current options. Of course, whether there’s enough of a market for it to make it worth their while is a whole other crucial issue.

The most significant shortcoming that they all have in common to some degree is that they all obscure much or some of the back screen. That doesn’t matter much with the older model of GoPros that don’t have back screens to begin with, but with the newer design that has the built-in back screen, that can be an issue. It’s not just for the live view so you can see what you’re shooting—it’s that many of the menu functions on the newer models are only available through the back screen menu system (or the mobile app, but that’s not always convenient, especially in wet conditions). While a trigger mechanism that has a 90-degree approach might be a little more complicated than these linear ones, you wouldn’t think it’s really that hard to design.

That said, the ones that do exist work well enough. If I need one that floats, I reach for the Telesin model. It’s simple and solid and pretty much foolproof. For non-watery filming, I prefer the Freewekk Pistol Trigger because it’s more precise and higher-quality construction.

Images and product information from Amazon PA-API were last updated on 2022-09-25 at 06:18. Product prices and availability are accurate as of the date/time indicated and are subject to change. Any price and availability information displayed on Amazon Site at the time of purchase will apply to the purchase of this product.

My Pick for the Best GoPro Trigger Grip