GoPro is running a deal on the new HERO9 Black, their newest and best camera. It's a bundle that includes the HERO9 Black, a 1-year subscription to GoPro, a free extra battery, and a 64GB SD card. It's all for $349.98.

Most cameras have a standard tripod connection built into the bottom. But GoPros don’t have that. There’s no connection on the camera body itself. So how do you put a GoPro on a tripod? Tripods might be old-fashioned–certainly not as exciting as mounting it on a snowboard or plane wing or helmet or bike–but there are times that they’re hard to beat. Maybe you’re shooting time-lapse or long exposure shots of the milky way or capturing an event from a fixed viewpoint. Or perhaps you want the versatility of a tripod ballhead without actually using the legs at all.

Yes, you can now buy small tripods built and marketed specifically for GoPros that have the GoPro-style adapter fused on (like this one). But you’re not limited to those GoPro-specific tripods. You can use any GoPro on any tripod by using the frame or housing that comes with the camera and getting a small tripod conversion adapter.

There are two parts to the solution. The first is that to mount a GoPro camera on a tripod–or to mount it on anything, for that matter–you’ll need to put the camera inside a housing or frame. Those frames and housings have an attachment point attached.

The second part is that you need a converter to go from the GoPro three-tongued attachment to a standard tripod thread. The GoPro attachment system has several advantages for the types of mounts that you’re likely to want to use with a GoPro or other action camera. The interlocking tongues use friction to lock very tight, and you can adjust the vertical tilt without risking it rotating loose. There are thousands of types of mounts and clips that use the GoPro connector, allowing you to mount the camera in a gazillion different kinds of places.

So here’s a rundown of the various options available.

For decades, most camera tripods have a small threaded stud. It is now officially a standard.

The standard thread on tripods is known as a 1/4-20 UNC thread. 1 That’s the one you find on the bottom of most cameras and on most tripod heads. And that’s the connection I’m focusing on here when I refer to a tripod mount.

There’s another standard stud used on many tripods, mainly larger ones, that’s known as 3/8-16 UNC.2 It’s much less relevant to GoPros, but I’m mentioning it here in case you run into the rarer case of trying to connect a GoPro to that thread. It’s a thicker–and therefore potentially sturdier–stud that’s often used to connect tripod legs to the bottom of a tripod head or for much larger professional cameras. It’s not usually used for the connection between the tripod head and most consumer cameras. There are situations where doing without a tripod head entirely and attaching the camera directly to tripod legs works better, but that’s a rather specialized approach, and GoPro adapters that connect directly to 3/8-16 threads aren’t readily available. But many current tripods have a safety net in the form of a 1/4-20 UNC adapter that’s included to get up to the 3/8-16 UNC size. If you remove that, it will expose a 1/4-20 stud underneath.

The most straightforward tripod adapter for GoPro mounts has a threaded socket on the bottom and a GoPro three-tongued connection on top. They screw on to a 1/4-20 stud.

You’ll still need to put the camera in a frame or housing. You’ll also need a GoPro tripod adapter to convert from that threaded stud to the GoPro-style mount.

In most instances, these work very well. They’re cheap and straightforward. But there are a couple of downsides that I run into, particularly in situations where there’s a lot of movement or vibration. One is that because these are a simple screw-on approach, vibration can cause them to loosen. Another is that it can be hard to align them precisely because you’re at the mercy of the length of the stud. If you can rotate the base, say on something on like a ballhead, it’s generally easy to fix, but that’s not always possible.

You can get cheap, simple, plastic versions, like this: 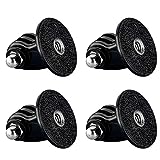 You can also go a step up with machined aluminum for extra strength, like this one: 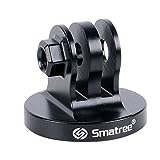 The basic option above attaches to a stud or bolt. But what if you want to do the reverse? This can be useful for attaching another camera that has the more traditional tripod stock to a GoPro mount. It can also be useful for other types of connection systems like camera cages or studio mounts like SuperClamps (see below). While these aren’t strictly tripod mounts, they do use the standard 1/4-20 connector thread, so I’m including them here.

One many of these, the broader plate doubles as a separate tightening mechanism. That’s useful for locking the alignment in place. 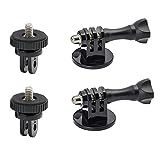 While these are good for attaching a regular camera to a GoPro mount system, you do want to make sure that it’s appropriately secure for the camera. Heavy cameras, for instance, would likely be better served by a stronger aluminum adapter or one of the options below that offer a larger surface area in contact with the camera to minimize the risk that the socket on the camera breaks.

I’ve yet to find one of these that I’m happy with. The problem I’ve run into is that some of these have too much tolerance in them. Put another way, they’re just a little too big for the clip, which means that the camera will wobble. And I’d strongly prefer machined aluminum over plastic. But I’m still looking for one I’m happy with, so I can’t recommend any of these right now. If you’ve found a good one, I’d love it if you let me know in the comments.

Some other variations move the camera away from directly over the mount point. They’re useful in two ways. Firstly, with a broader base, it spreads the leverage out and reduces the risk of the socket itself breaking or coming loose, something I’ve had happen. These longer adapters have a broader plate and add security. Secondly, they’re useful when you need more control over the shooting angle or are trying to reduce the risk of a tripod plate or legs getting in the shot.

There are a bunch of different variations on the theme. Some are longer and some are aluminum rather than plastic. A simple example is this one._ 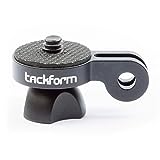 Here are some special cases I’ve run into and some solutions.

When you really need a firm hold, it’s hard to beat a Manfrotto SuperClamp (or the less-expensive alternative from Impact). They’re big and heavy–especially compared to a small, lightweight action camera–but they provide a rock solid mounting point.

Clamps like these are designed to be utilitarian and have a bunch of different connection options. The traditional stud will work in combination with the basic adapter, although I don’t like having the risk of it unscrewing and the alignment issued. There’s also some risk of obscuring some of the field of view at some shooting angles.

So I prefer a low-profile reverse adapter_

Mounting a GoPro in a Camera Hot Shoe

Okay, so this isn’t using a tripod connection at all, but it’s broadly related, so I’ll include it here. But there are times you mount the camera on top of another camera using the primary camera’s hot shoe. Some photographers like to do so that they can shoot video with the GoPro while simultaneously shooting stills (or video, for that matter) with the primary camera. It’s also useful if you want to attach a GoPro to a flash stand. It’s worth noting that these are cold shoe connectors because they don’t transfer any electronic signals. 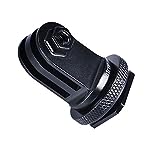 Images and product information from Amazon PA-API were last updated on 2020-11-13 at 20:08. Product prices and availability are accurate as of the date/time indicated and are subject to change. Any price and availability information displayed on Amazon Site at the time of purchase will apply to the purchase of this product.