Wondering if you can use a 256GB, 512GB, or 1TB microSD card in your GoPro? So long as you’re using one of these GoPro models and the card is fast enough, you can. 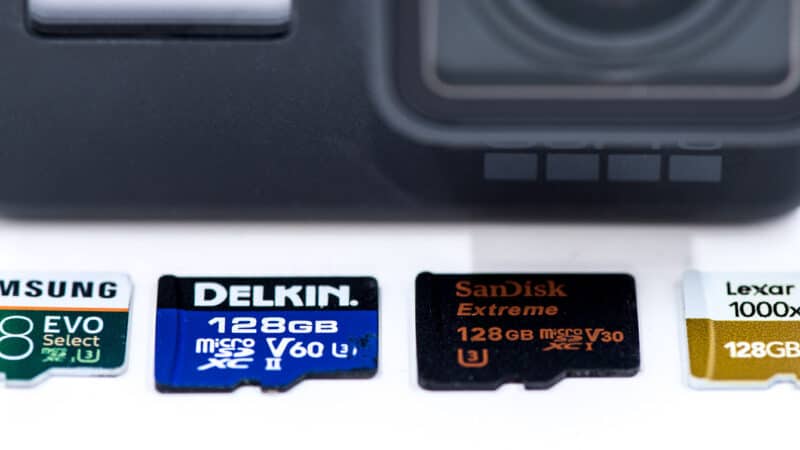 First, this doesn’t apply to some older models. Some of those older models only work with SDHC-formatted cards, which, in practice, limits them to 32GB and below.

But newer models also work with SDXC-formatted cards (ie. exFAT filesystem), which means that you can use cards 64GB and larger. The models that do work with the larger SDXC cards are:

GoPro doesn’t include the 1TB storage capacity cards in their official guidance (at least, not yet). But I’ve personally tried 1TB cards in some of the new models and haven’t run into any issues. The cards do, however, have to otherwise meet the camera’s speed requirements. And I haven’t tried it in some of the older models. I have more details specifically on using 1TB SD cards here.

The second caveat is that the card is fast enough.

Not all microSDXC cards are fast enough for the high-end video modes of these GoPros, and using a card that’s too slow can lead to unstable and unexpected behavior such as video recording stopping unexpectedly or error messages. Specifically, you want SD cards that have fast sequential write speeds, which is the spec that’s relevant to recording video or using the burst photo modes on GoPros. That’s not to say that you need the fastest microSD card that money can buy, necessarily. GoPros can’t make full use of the very fastest cards, anyway. 1 But you need one that’s fast enough to meet the camera’s threshold requirements.

If you’re looking for some guidance on which SD cards are fast enough for the various GoPro models, I’ve put together some recommendations for specific models:

The 64GB, 128GB, 256GB, 400GB, and 512GB cards you see will all be labeled as microSDXC. Only cards 32GB and smaller will have the microSDHC label. You won’t find any 128GB cards sold with microSDHC labeling, for example. The distinction is one set by the SD Association’s specification. 2

Aside from the storage capacity, an important difference between microSDXC and microSDHC cards is in the filesystem formatting used. microSDHC cards use the FAT32 filesystem. microSDXC cards use a newer and more flexible exFAT filesystem. While it’s technically possible to use a computer to reformat the card with the other filesystem, it’s not recommended, and the next time you reformat the card in the camera, it will revert to the expected filesystem. (That said, if you really want to do it on a computer, I’ve put together a guide to use the official SD card formatter app.)

You can find my general recommendations on the best SD card for GoPro cameras here.