How to Join GoPro Videos with Wondershare UniConverter

GoPros save their video files in 4GB segments. Here’s how to join them back together using Wondershare UniConverter. Includes 4K HEVC video files. 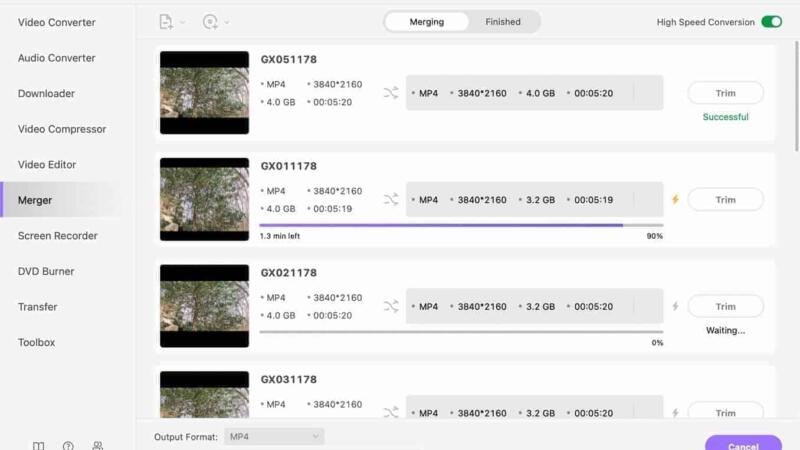 A while back, I posted on how to join GoPro videos. If you’ve used your GoPro for any length of time shooting video, you will have found that, like many other video cameras, GoPros split up their video files into chunks. It’s called chaptering, and there are good reasons for it–I cover them in a separate post on why GoPros split videos into segments.

But what if you want all those chunks joined together into a single file? That’s why I posted a guide to joining GoPro videos in the first place. But at the time I posted that, GoPro was only encoding videos in H.264. That’s an effective and very widely compatible video codec that has become the defacto standard for web video.

Since then, a better and more efficient codec has been getting traction, and GoPro has adopted it in some of their recent models. Known as HEVC or, less commonly, H.265, it uses a more efficient algorithm and potentially offers higher quality at a given bitrate compared with the older H.264 codec. The catch is that for now, at least, it’s not as widely compatible. Which means that some apps, video services, and computers won’t yet support it.

Among those apps was the free app that I used for the old post. That guide works with H.264 files, but it won’t work with the newer HEVC files.

That’s why I’ve put together this guide, along with others related to it using different apps, on how to join GoPro videos using other apps. And these specifically include support for GoPro’s HEVC videos.

There are several apps that can join GoPro HEVC video files, and I’ll try to put together guides for a few different ones separately. The one I’m focusing on here is Wondershare UniConverter. You can download a free trial version here.

Before we get started, though, I should point out one major drawback of using Wondershare UniConverter for this process if you’re shooting with a GoPro HERO9 Black. And that is that for, at least, UniConverter only supports files up to 4K. 1 If you’re shooting in 5K on the HERO9, UniConverter can take the files in, but it will only output up to 4K. It is very possible, even likely, that this will be addressed in a future upgrade (I’ve reached out to Wondershare support but have not heard whether or where this is on the to-do list). If you’re shooting 5K HEVC video, I’d recommend VideoProc (I’ll be posting a separate guide on using that shortly.) In this example, I’m using 4K HEVC video clips.

Wondershare have a few apps in their stable that can work with video. The best-known are Filmora and Filmora Pro, which are video editing apps. UniConverter has only very basic video editing features; its main focus is on converting from one video format to another. It works with a wide range of video file formats. And it also works with audio and other types of files as well, meaning it’s a useful tool to have on hand for more than this specific purpose.

UniConverter is a paid app; there’s also a feature-limited trial version that you can use to test it out.

The way in which it joins GoPro HEVC videos isn’t ideal because it converts the files as part of the process. In theory, that extra generation removed from the original degrades the video quality slightly. But unless you’re shooting for cinema or broadcast–neither especially likely with a GoPro–chances are you won’t notice any visual difference. In the tests I’ve done, I’ve not noticed much real degradation, especially with the high-speed option disabled.

How To Do It

When you open up UniConverter, you’re shown a panel with file types on the left and the main action panel to the right. 2

There are two ways to access the merge feature. Both work the same way. I’m going to focus first here on the most obvious method. And that’s to use the “Merger” function from the list at left.

Make sure to select that feature from the menu at the left first. One of the annoyances of the app is that if you add the files into the “Convert” section, you can’t just change to the “Merge” section and have the files there–you have to re-add them, and that can take some time with large 5K videos.

You can drag and drop the files onto the panel. Or you can click on the add file icon at the top left for some more specific source options.

Add the MP4 files to the panel. You can drag the THM files there, too–it won’t do any harm, and they’ll just be filtered out and ignored. (If you’re curious about what the THM files are, I have a post on them here).

In this instance, I was using 4K videos shot on the GoPro HERO9 Black and recorded with HEVC encoding with the high-bitrate setting.

You then choose the video format. You’ll probably have MP4 showing up by default, but you can get more granular than that with different formats. You can also make your own custom presets.

This raises the point that you can both join clips and convert them in the same step here. My focus right now is on joining clips rather than converting them, so for these files, I’m going to output them again as HEVC at the original resolution (aka, the “Same as source” option).

The final thing to do is to choose where you want the stitched file to be saved. If you’re pulling them in directly from the microSD card, you’re better off choosing a folder on your hard drive to save the resulting file.

Once you’ve done that, click on the Start button at the bottom right of the panel. It’ll take a while to do its thing, depending on the processing power of your computer–it’s not an instantaneous process like it is with H.264 joining. But it’ll give you a progress indicator under the files.

Once the process is complete, you can click on the “Finished” option for the slider at the top to take you to the stitched file. If you’re running it overnight or setting it and leaving it, you can also enable an option to put the computer to sleep or shut down when the task is finished (on Mac, go to Wondershare Uniconverter > When Task is Complete).

There’s a “High Speed Conversion” switch at the top right. That does pretty much what it says. To speed things up, it uses a rougher and less precise encoding process. In most cases (except for the screenshots above), I’ve been leaving it off, which does take longer, but rarely so much longer than it’s much of an issue for my needs.

Wondershare UniConverter is a paid app. You can choose between an annual license or a perpetual license (i.e., no recurring fees).

How to Join GoPro Videos with Wondershare UniConverter