If you want to use the older GoPro WiFi Remote with your HERO7 Black or HERO6 Black, you can. But there is a trick to look out for. So here’s a quick guide. 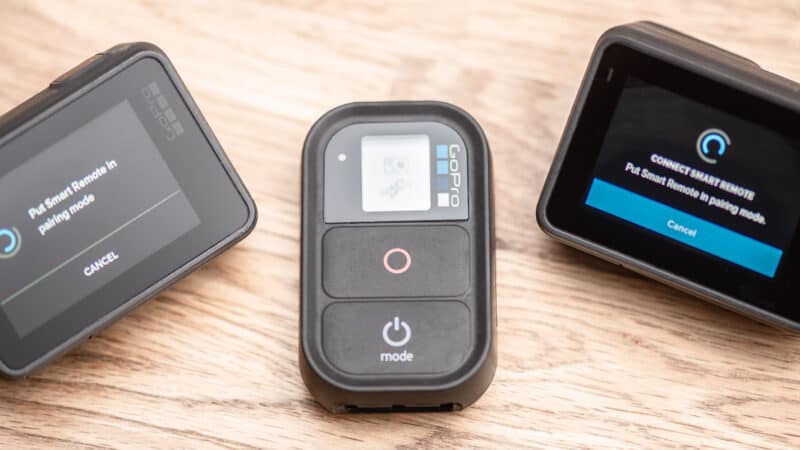 If you’re trying to control your GoPro with a remote control, there are newer, better options than using the old, discontinued GoPro WiFi Remote. The newer GoPro Smart Remote is a good place to start, as is the GoPro mobile app.

But if you want to use the GoPro WiFi Remote with your HERO7 Black or HERO6 Black, you can. It’s mostly straightforward, but there is one trick to look out for. So here’s a quick guide.

With the remote powered off, hold down the shutter button (red circle). Briefly touch the power/mode button.

The remote will power up, and you should see the pairing animation, which consists of a camera icon and two arrows moving toward each other. Like this:

To the extent there’s a trick to making this work, this is it. The GoPro WiFi Remote uses what used to be the standard wifi band: 2.4GHz. The newer GoPros come set to 5GHz by default. So you need to get them speaking on the same wavelength (pun intended). The good news is that on the HERO7 Black and HERO6 Black, you have the option of choosing either 5GHz or 2.4GHz.

To do it, go into the camera’s Connections options and change the WiFi band from the default 5GHz to 2.4GHz. Here’s the specific place you find that setting on each model:

Put the GoPro in Pairing Mode

Make sure that you’ve got the camera’s wireless functions are enabled:

Then move onto the pairing mode. You won’t see the option specifically for the WiFi Remote on the newer cameras; use the Smart Remote option instead.

They should start talking to each other within 10 seconds or so. Sometimes it can take a bit longer, so give it some extra time. If it doesn’t connect, the camera’s pairing mode function will eventually time out after a few minutes and display a message saying that the pairing has failed.

Once connected, you can use all the usual functionality of the Wifi Remote. That includes being able to control multiple cameras and switch shooting mode.

The HERO5 Black should also work with the wifi remote without any extra effort. That’s because it uses dual-band 5GHz and 2.4GHz b/g/n wifi frequency—in other words, both at once—and should automatically detect and use the appropriate one. But in practice, I’ve had more trouble getting it to pair with the wifi remote than I have had with the HERO6 Black and HERO7 Black.

Not all GoPros are compatible with GoPro remote controls, even if they have some wireless functionality and work with the GoPro mobile app. Examples are the HERO7 Silver and HERO7 White. Both work with the mobile app, but you can’t connect a remote to them. And the HERO9 Black has a newer remote.

When you’re controlling multiple cameras, you can mix and match camera models—they don’t all have to be the same model.