The GoPro HERO6 Black has built-in video stabilization. Here are some side-by-side examples of how it compares with the stabilization in Final Cut Pro X and Adobe Premiere Pro CC’s War Stabilizer. 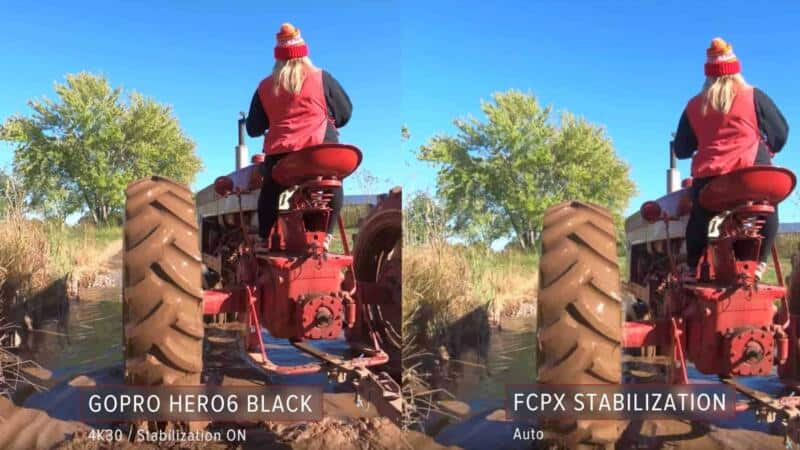 The GoPro HERO6 Black has built-in video stabilization (as do newer models released since this was posted). It helps smooth out shaky footage.

One of the selling points for the upgrade from HERO5 to HERO6 is better in-camera video stabilization.

I’ve found it to work quite well. The version in the HERO6 Black is also a significant improvement over the HERO5 versions. It’s a software implementation, which means that the computer chip in the camera analyzes the content of the video and tries to compensate for the moment. That’s typically not as good as something that actually stabilizes the camera mechanically using something like the Karma grip or some other kind of gimbal or gyro system like Steadicams.

But it has several advantages. For one thing, it’s built-in, so there’s no need to buy extra accessories. For another, it’s simple and versatile–gimbals and gyros aren’t good fits for many of the kinds of places you might want to mount a GoPro. And it’s also waterproof–many external stabilizers aren’t, including the Karma grip.

But I was curious to see how the HERO6 Black’s in-camera stabilization performed compared with other readily available software stabilizers like the ones that are included in Final Cut Pro X and Adobe Premiere Pro CC.

There are two things I’m looking for here. One is overall smoothness–that gliding look. The other is whether the stabilization is added a jelly-like look as part of the correction. For what I mean by that, look at the area around the tractor’s main engine in the examples below.

To test it, I shot with two HERO6 Blacks side-by-side in a dual-frame mount. One camera had the stabilization turned on. The other had it turned off. All the other settings were identical. I then used that non-stabilized footage as the version run through Final Cut Pro X and Premiere Pro’s Warp Stabilizer.

I should add here that I’m using the automatic settings for all of these. There’s no way to adjust the camera’s stabilization, but both the FCPX and Premiere Pro stabilization features offer settings where you can tweak the results. But they also both examine the clips to calculate the optimal settings, and that’s what I’m using here. There are also third-party plugins that you can buy–I’m not testing those here.

GoPro HERO6 Black Stabilization: ON vs OFF

First, as points of reference, here’s some non-stabilized footage side-by-side with the version using the HERO6 Black’s internal stabilization option.

I have some more examples showing the effectiveness of the HERO6 Black’s internal stabilization vs not using it here.

Final Cut Pro X has a couple of different approaches to stabilizing. The Auto setting examines the footage and calculates what it believes to be the best option. That’s what I’ve used here.

Here are the same clips from above after being run through Final Cut Pro X.

Here’s the first one:

And the second one:

Again, this was using the automatic settings in Warp Stabilizer.

Drawbacks of In-Camera Stabilization in the HERO6 Black

Applying the stabilization in-camera is very convenient. It means that the footage comes out stabilized from the get-go and there’s no more messing with it in post. That can save a lot of time and effort. But there are nevertheless some drawbacks worth considering.

One drawback of using a software approach to stabilization is that it cannibalizes some of the image data. They’re all designed to keep the original dimensions and aspect ratio, so it’s not like your 1080p footage is no longer 1080p, but as you can see from the on/off examples at the top, it’s effectively zoomed in slightly, with some of the edges of the frame being cut off. That inevitably results in at least some degradation in the image quality. In practice, that can be negligible. But there are also circumstances where it can become quite noticeable.

Another downside of doing it in-camera is that there’s no undo. The stabilized version is the one that’s saved onto the memory card, and there’s no way to recover the raw non-stabilized version. So if you’re getting some unwanted jumpiness from the camera’s calculations being thrown off, there’s no easy way to fix it.

The HERO5’s in-camera stabilization works pretty well, but I still thought the stabilization in Final Cut Pro X and Premiere Pro worked better, so with that camera, I’ve tended to shoot without the feature on (or used something like the Karma grip when appropriate).