How to Charge GoPro HERO9

There are several ways to charge the battery of your GoPro HERO9 Black. Here’s a rundown of the options, and which is best to use, when. There are several ways to charge the battery of your GoPro HERO9 Black.

Here’s a rundown of the various options, as well as some recommendations on which is best to use, when.

If you’re new to GoPro cameras, particularly the latest models, you’re quickly going to become very familiar with battery charging. That’s because GoPros don’t have very impressive battery life. For all the good things about GoPro cameras, battery life is a weak area. So you’re going to have to proactively factor in charging the battery more than you might be used to with other cameras.

Ways to Charge the HERO9 Battery

With both methods, you can use a range of different power sources (more on that below).

Charge the Battery in the Camera

For this, you just leave the battery in the camera as normal, connect a USB charging cable to the camera, and connect the other end of the USB cable to the power source.

The advantages of this approach are that it’s simple, and the only accessory required is the USB cable that comes with the camera. The disadvantage is that you can’t be shooting with the camera and charging the battery at the same time.

The camera comes with a USB charging cable. But despite the GoPro stamp on it, it’s just a generic USB-C cable and conforms to USB-C standards. In other words, it’s not a proprietary, special cable, and it’s easy to replace if you’ve misplaced it or would like a spare. 2

Unfortunately, though, not all USB cables are created equal, and there are some cables on the market that are substandard. You don’t need to fall into the trap of buying the most expensive cable available, but it’s also worth being a little picky and to take note of reviews, if they’re available. Most of the aftermarket cables I’ve bought have worked just fine, but occasionally I’ve found some of the cheapest cables can be a bit flaky.

The specs you’re looking for are: 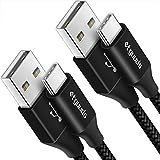 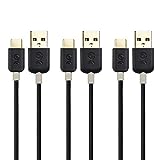 The next thing to look for is that the cable has the right connectors for your power source.

The most commonly used in power sources is the standard USB Type-A connector. That’s usual USB plug that you’ll have been used to seeing on devices for years. It’s usually a safe bet for most power sources.

Some newer USB power sources use a USB-C connector, although, for now, that’s not as common.

The HERO9 doesn’t come with a power source as standard. There’s no AC charger in the box.

But there are many good options, and chances are you already have several basic options around the house that will work just fine.

All GoPros charge with the USB standard. What that means in practice is that there’s a lot of flexibility when it comes to a power source. You’ve probably already got a bunch of AC wall chargers you can use, or you can use a USB power pack battery, for example.

Here are some good options for power sources for charging a GoPro with the battery in the camera.

GoPro’s SuperCharger is the premium option. There are cheaper options, but the advantage of the SuperCharger is it’s designed specifically for fast-charging GoPro cameras. It also comes with an assortment of international adapter plugs that you can switch out based on your travel destination.

You can find them at: GoPro.com, Amazon, B&H Photo, or Adorama.

By itself, the SuperCharger can be used to connect directly to the camera (using the charger cable). It can also be used in tandem with the Dual Battery Charger, an external charger, for rapid charging and charging two spare batteries while you continue shooting with a third. Make sure to get the one specifically for HERO10/9 batteries; there are also versions for the MAX, Fusion, and HERO5/6/7/8, none of which will work with HERO9 batteries.

Other Wall Chargers for HERO9 Black

Not all wall chargers have the same power output. An AC charger that came with your new phone or tablet is probably a lot more powerful than the one that came with the Kindle you bought five years ago.

But they’re nearly all designed to intelligently provide only what the receiving device can accept.

The HERO9 can take up to 5V/2A, which allows for faster charging. Newer chargers can output that easily, although older chargers might offer less power than that and therefore will charge more slowly.

Things to watch when shopping for wall chargers for your GoPro HERO9:

An example of a simple option: 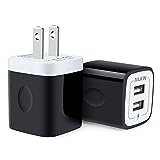 If you’re planning on charging phones or tablets or even laptops at the same time, a more powerful option would be a good choice. I pack one like this one in my travel kit. It’s small and portable but allows me to charge multiple devices at once, including my GoPros.

You can plug your HERO9 into a USB port on your computer. It works, but it’s not the best way to do it, mainly because most computer USB ports have relatively low power output, and therefore charging is slow.

If you’re plugging it into a laptop, make sure to have your laptop powered by AC. Many laptops throttle down the USB output charge when they’re running off battery power as a power-saving measure.

Charge HERO9 with a USB PowerBanks

Using a USB powerbank can be among the most convenient power sources to use for charging your HERO9, mainly because you can do it anywhere. It can be especially convenient to do when traveling between shoots.

What to look for: Not all powerbanks (or powerbricks) output enough power for rapid charging (5V/2A), but newer ones often do.

There are some other USB power sources available, although these are probably less useful in most circumstances:

What Kind of Battery Does the HERO9 Take?

GoPro has two official batteries for the HERO9. There’s the standard battery, which is the one that comes with the camera. They’ve since announced a new high-capacity battery.

There are also non-official aftermarket batteries that can offer good value.

The standard battery for the GoPro HERO9 is model ADBAT-001. It’s a 1720mAh lithium-ion rechargeable battery. 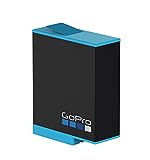 It’s the same battery used by the HERO10 Black, but it’s not the same as the one for the HERO8 Black (they’re different physical sizes.

In late-2021, GoPro released a new battery that they’re calling the Enduro. It has the same mAh rating as the standard battery, but GoPro claims it has better performance in cold conditions, faster charging, and longer shooting time.

They’ve announced the Enduro mainly in the context of the HERO10, but it’s also compatible with the HERO9.

You can find it at GoPro.com. 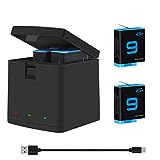 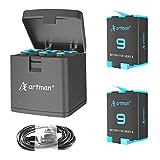 What to look for: Make sure that the battery is specifically for the HERO9 or HERO10. Batteries designed for other GoPro models will not work in the HERO9.

The most efficient way to manage HERO9 battery life is to have spare batteries and use an external USB charger cradle. That allows you to continue shooting with one battery while charging spares.

How Long Does it Take to Charge a GoPro HERO9?

How long it takes to fully charge your HERO9’s battery depends on whether it’s fully depleted, the battery’s overall health (ie. how old it is), and what method you use for charging.

If you’re using a power source with a low current such as a computer’s USB port, it can take up to 4 hours to fully charge your HERO9’s standard battery.

If you’re traveling overseas, you can use any of the usual international travel adapters. Some of the newer ones have integrated USB charging, like this one. Some of these support up to 2.1A output, but it varies by model. You can of course still use an adapter that doesn’t have built-in USB by plugging the USB wall adapter into the travel adapter.

Another option is the SuperCharger. It’s an official GoPro accessory that includes a dual USB-C output as well as clip-on adapters for several international plug types (US, UK, Europe, and Australia). These chargers aren’t inexpensive, and they make the most sense with the newer GoPro cameras like the HERO9 that can take advantage of the fast charging by using the charger’s higher output.

WiFi. It’s a good idea to turn the wifi off before charging. Even with the camera powered off, the wifi function drains battery power, especially if there’s an active wireless connection to the Quik/GoPro mobile app.

Charging While Shooting. You can run your GoPro with external power. And while external power is connected, it’s generally charging the internal battery. But the charging function is disabled while you’re recording video. An exception is when the camera is connected to a computer’s USB port, in which case you won’t be able to record while it’s connected (but the power throughput is probably on the low end).

The Battery for the HERO9 is different from HERO8. I’ve mentioned this before, but it bears repeating: the HERO9 battery is the same as the one used by the HERO10, but it’s different from the battery used in every other GoPro camera.

Images and product information from Amazon PA-API were last updated on 2022-01-18 at 07:08. Product prices and availability are accurate as of the date/time indicated and are subject to change. Any price and availability information displayed on Amazon Site at the time of purchase will apply to the purchase of this product.