GoPro claims that the new HyperSmooth in-camera electronic stabilization of the HERO7 Black is much improved over the previous generation in the HERO6 Black. So I’ve been putting it to the test. Here are some side-by-side examples. 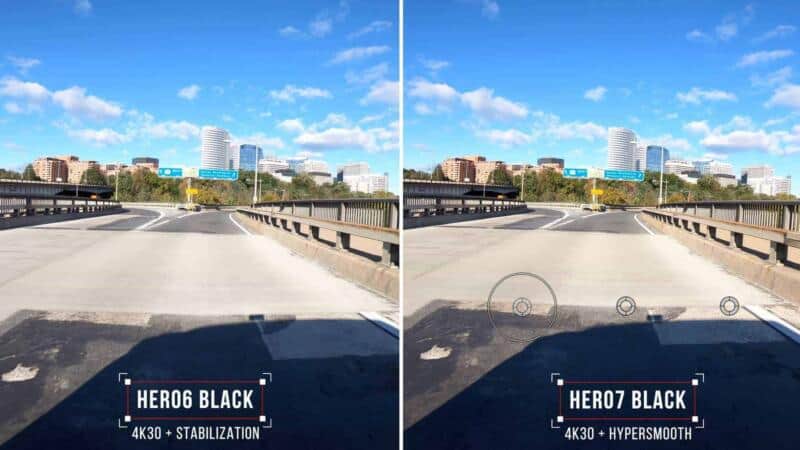 GoPros have included in-camera electronic stabilization since the HERO5 models. The HERO6 Black improved on it, but GoPro has claimed that the HERO7 Black has taken a big step forward. They’ve even given it a new name: HyperSmooth. It’s a new technology that GoPro has invented that combines advanced scene analysis and a rolling shutter correction algorithm to correct for jerky footage and, hopefully, create vastly smoother footage.

I wanted to see what that meant with some real-world examples. So I mounted a HERO7 Black and a HERO6 Black in a side-by-side frame and put shot some footage under different moving conditions, including car mounted, bike-mounted, and walking.

In-camera electronic stabilization isn’t always a good fit for everyone. Sometimes it’s better to be able to apply it in post, where you have the opportunity to fine-tune the settings. And it’s hard to beat the end result when using a high-quality gimbal, but that brings with it extra hassle and cost. But I was struck by GoPro’s marketing claim that the new HyperSmooth stabilization provides gimbal-like results. So hopefully, these examples are useful to get a sense of how the HERO7 Black’s HyperSmooth stabilization compares with the older version and whether or not it’s worth the upgrade to you.

These were taken with the GoPros mounted to the front of a car using a heavy-duty magnet mount. This first one is in bright daylight. You can’t really tell from the result, but some of these roads are actually quite bumpy, particularly the area over the bridge. So that’s a good sign that the stabilization is doing its thing. As you can see, while the H6 Black does a pretty good job, the HyperSmooth is indeed smoother.

And this one is in low light, where the algorithm has less defined detail across the frame to work with.

These were filmed with the GoPros mounted on the handlebars, using a GoPro handlebar mount.

I’ve found that bike-mounted footage provides some of the most dramatic examples of the improvements in GoPro in-camera stabilization. That was true when going from the HERO5 Black to the HERO6 Black, and it’s true again here. In this first one, which is along a somewhat bumpy bike path, the HyperSmooth is working much better than the HERO6 stabilization. (In both of them, you can see that the high level of detail is challenging the compression algorithm, but that’s a different issue.)

Here’s another on the road that still provides a pretty dramatic contrast.

Here’s a smoother ride on a good-quality road surface.

This is the same road surface in flatter but more even lighting (it was shortly before sunset).

And, finally, as a frame of reference, here’s one with the stabilization on the H6 turned off completely. It shows pretty dramatically how well the in-camera HyperSmooth is working compared with no stabilization.

This is just pretty stock-standard walking with the cameras handheld. They’re not mounted on a chest harness or helmet.

Here’s another one, again handheld.

Here are various tests under other random shooting conditions where the cameras are subjected to different types of movement.

This one is short, but it’s a quick ride down a wavy slide. Again, handheld, and there’s a lot of vertical movement going over the bumps.

This isn’t really the type of thing that the stabilization algorithm is designed for, but I thought it would be interesting to see how the stabilization performed for a static, handheld shot. As you can see, the results are better than not using stabilization, but you still get that kind of floating feel. It’s definitely not a substitute for the tripod you’d normally use for static shots.

Again, it’s not really the type of shot the stabilization is designed for, but here’s a simple handheld pan. You can see the very jerky way as the stabilization algorithm tries to recalibrate the horizontal motion. Both of them suffer from it, although in different places.

This is from the trailer behind a tractor on a bumpy farm track during a hayride. The movement is quite slow, but the bumps are quite large.

How These Were Shot

Based on these tests, it’s hard not to conclude that the HyperSmooth of the HERO7 Black does indeed work much better than the previous generation of in-camera stabilization used in the HERO6 Black. That said, the amount of improvement varies on the type of movement, and you’re likely to see more dramatic results in some kinds of shooting than others.

But it’s also just not about smoothness. I’ve found that footage is just much sharper and clearer on a frame-by-frame basis. That’s much easier to see on scenes that have a lot of busy detail of the kind that really challenges the compression algorithm. The end result is that when played at normal speed, the footage is just crisper and clearer.