Joby has some new action camera mounts. I’ve been testing out the suction cup and clamp with the new locking arms. 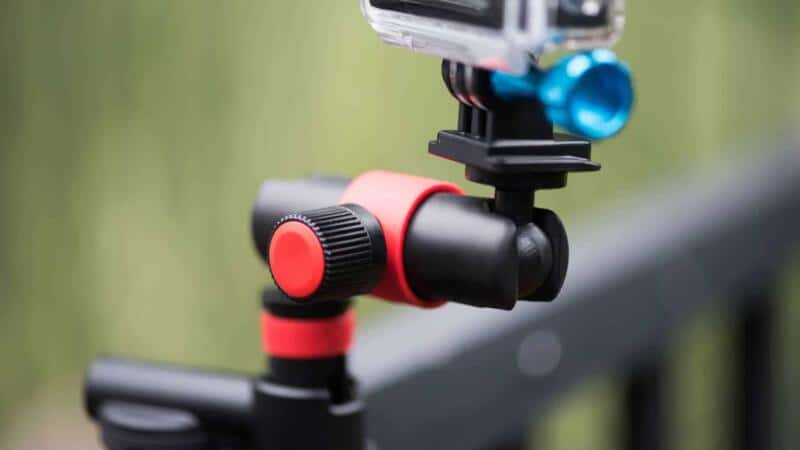 Joby is best known for its Gorillapods. They’re those flexible mini tripods that have flexible arms that look like a bunch of interlocking balls. Depending on the model, they can work with anything from small pocket cameras right up to DSLRs. I’ve used a variety of these over the years, and they work very well.

Now, they have a new range that’s focusing specifically on action cams like GoPros. They’re calling the new range the Joby Action Series™ (and yes, they really have trademarked that).

Several of the items in the range make use of that distinctive Joby flexible arm. But the ones I’ve been most interested in are the sturdier locking arm system. It provides a more rigid lock than the GorillaPod arm, so there’s less movement in the camera. 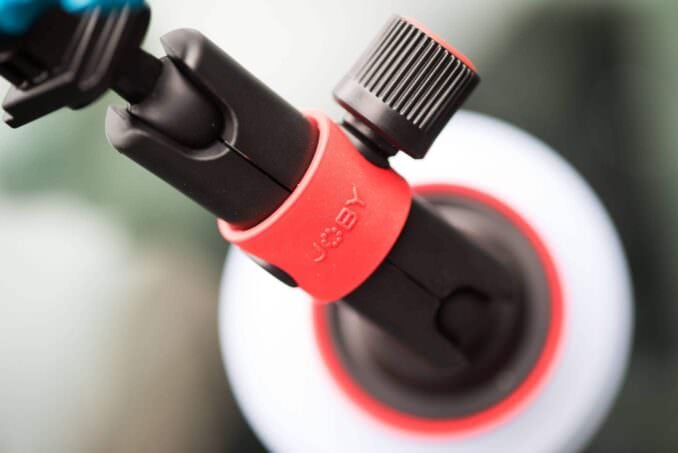 The locking arm is modeled directly on the type of locking arm that RAM mounts have used for quite some time. 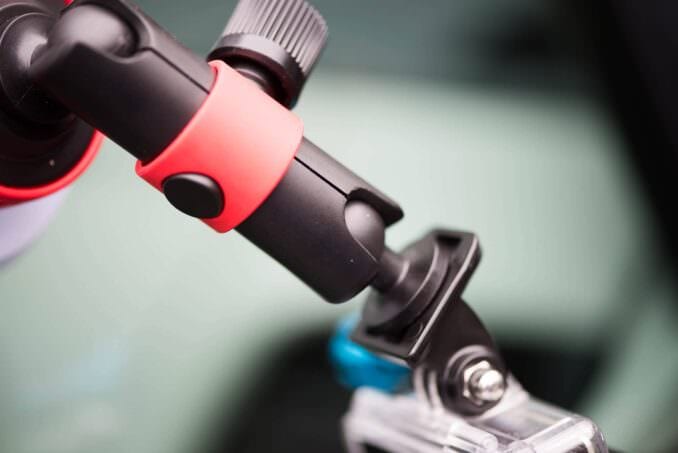 But where the RAM versions are all-metal and incredibly strong, the Joby version is made of lightweight plastic. That means the Joby versions are much lighter (and less likely to go through the windscreen if it comes off, for that matter). Joby is specifically marketing these for lightweight action cams, whereas the RAM mounts are utilitarian jack-of-all-trades that are used with a wide variety of payloads.

So I’ve been putting two of them through their paces–the Suction Cup & Locking Arm™ (yep, more trademarks) and the Action Clamp and Locking Arm™. 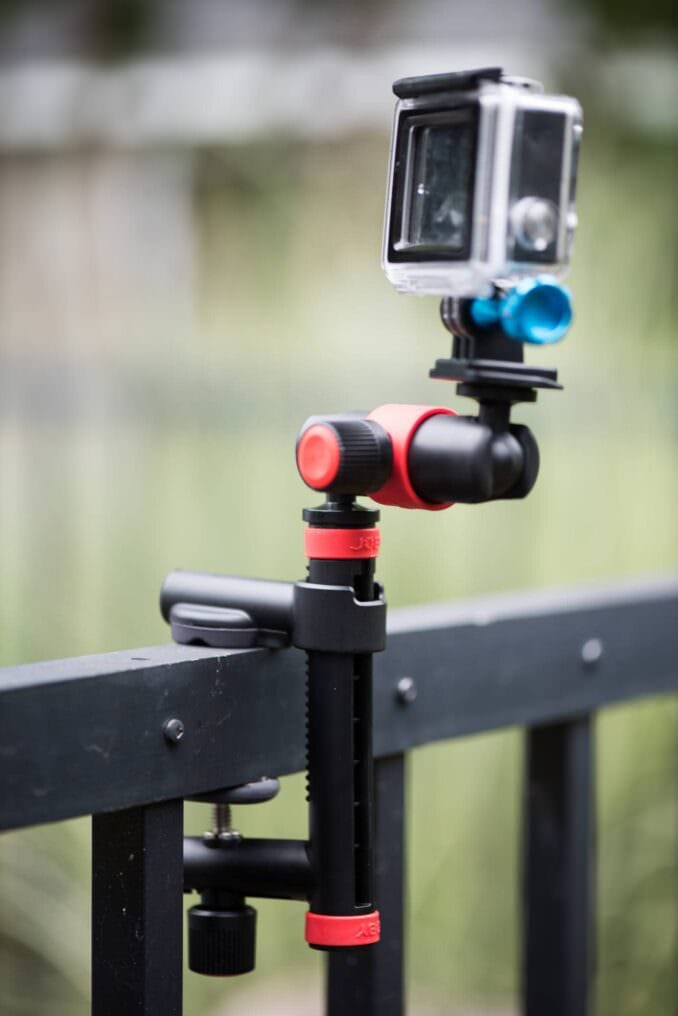 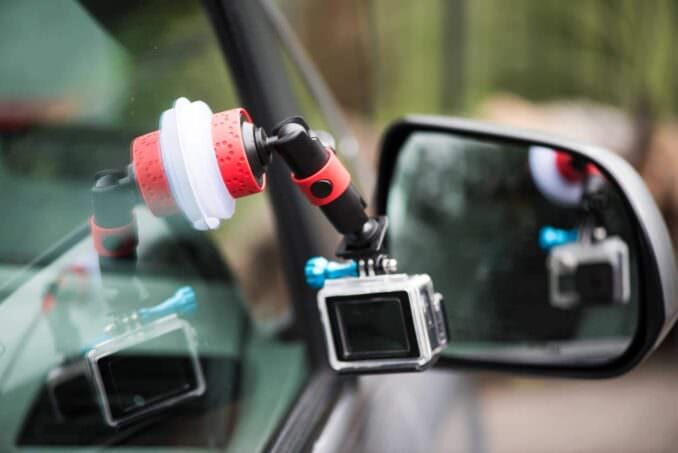 Both are also available with the GorillaPod Arm in place of the Locking Arm. The range also includes an Action Grip™ (basically a handle bobber), an Action Grip & Pole (the grip on a selfie stick), an Action Jib Kit, hub adapters to attach multiple cameras together on the same mount, and various tripod and GoPro connectors.

This works basically the same as other GoPro suction cups. The suction cup locks with a rotation of the red ring just above the cup. 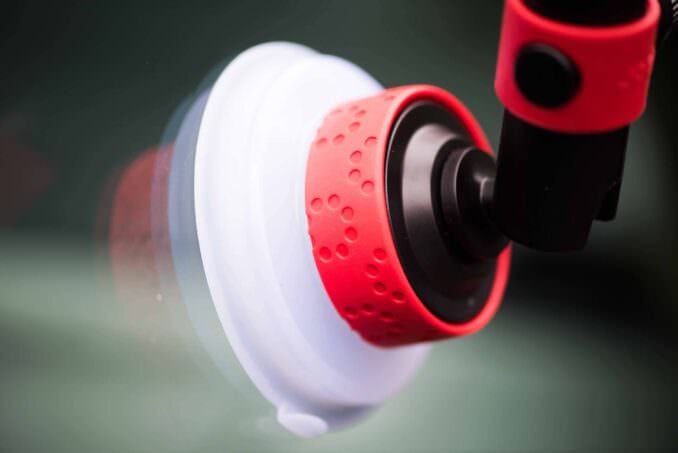 The arm locks in place with a single knob that makes the entire arms act as a clamp on a ballhead on each end. 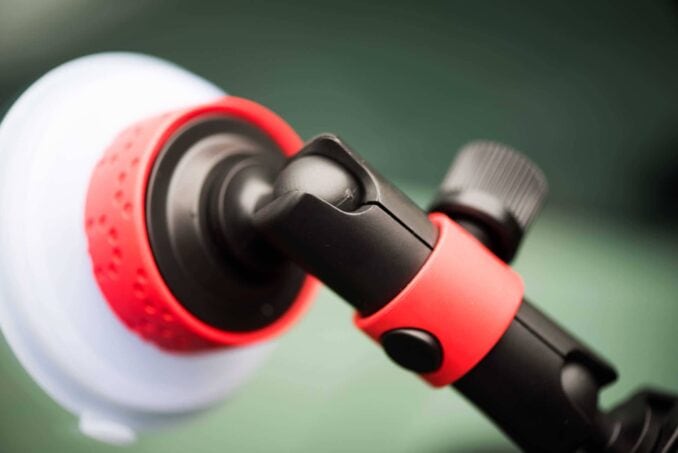 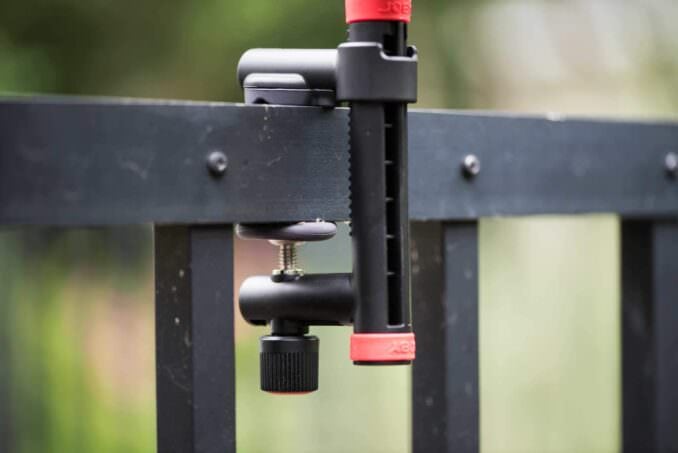 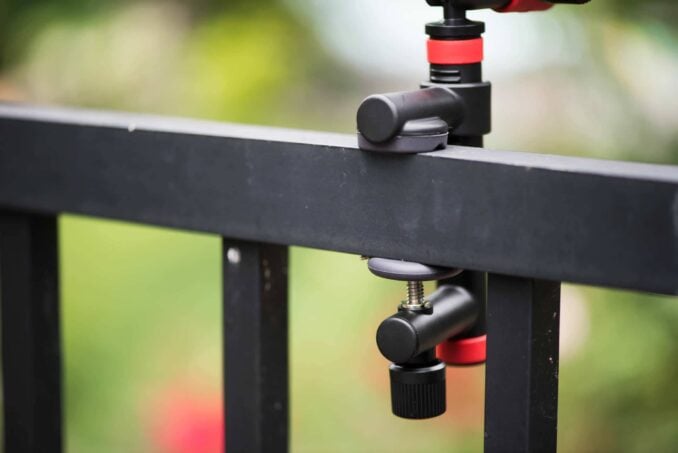 The surfaces of the pads are plastic. They’re not especially grippy on their own, but it works well enough for a lightweight camera. The top pad has a groove across it that’s designed to help stabilize it when using on non-flat surfaces.

The boxes have a big red sticker saying that they fit 360° cameras, meaning cameras like the Ricoh Theta S, the Samsung Gear 360, and the forthcoming KeyMission 360.

In reality, there’s less to that than it seems. It’s just the marketing department getting a little carried away. It simply means that the mounts have a 1/4″-20 attachment, which is the standard tripod thread. So yes, you can put a small 360° camera on them, just as you can put just about any other type of small, lightweight camera. By that measure, just about any camera mount ever made in the history of camera mounts fits 360° cameras.

These work quite well for what they’re designed for. The locking arms provide a more rigid alternative to the GorillaPod arms but are still flexible and easy to use.

My biggest criticism concerns the price you pay for using lightweight plastic on the locking arm. And that is that it simply doesn’t clamp down very hard. Turn the tightening knob as much as you like, but there’s still going to be surprisingly easy to move. In situations where there’s not much in the way of force on the camera, that’s not much of a problem. But add some bumping and momentum as you get on fast-moving platforms, and that can become a problem when the camera slips from where you locked it. And I definitely do not recommend using it with anything heavier than a GoPro. If you are planning to use with anything heavier, or if you really need something with even more stability, I’d recommend taking a look at the RAM mounts. They’re more expensive and heavier, but they’re also incredibly solid.