GoPros split up large video files into chapters. Here’s a quick method for joining them back together. 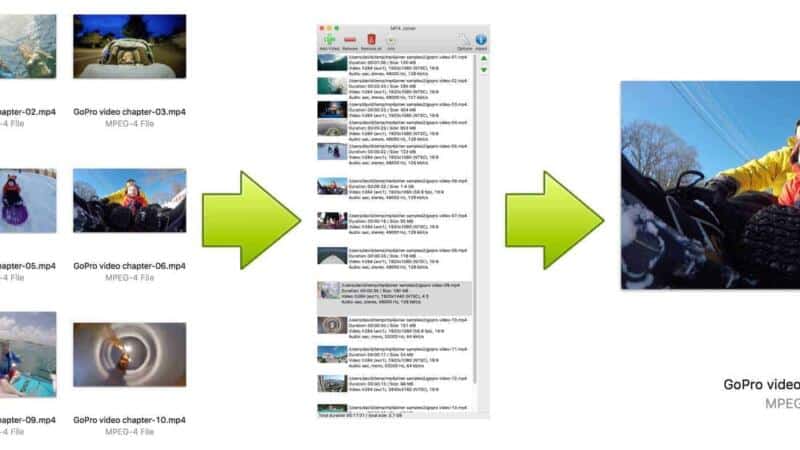 NB. For now, at least, the method outlined here only works with video using the H.264 (AVC) codec. Recent generations of GoPro cameras also use a newer, more efficient video codec for some high-end video modes. It’s known as HEVC or H.265. I have a separate post on working with HEVC / H.265 files and joining H.265 files with Wondershare UniConverter.

If you’re shooting video on your GoPro in any of the high frame rate and resolution settings, you have probably noticed that GoPros split the resulting video files into segments. At the highest 4K or 5.3K or high 240-fps settings, those segments might be only 6 to 8 minutes long.

It’s called chaptering, and there are good reasons they do it. But what if you want to join the segments back together.

There are two ways to do that. The “proper” way is to import the individual clips into a video editor like GoPro Studio (which is no longer available), Final Cut Pro X, or Adobe Premiere, make your edits on the timeline, and export a new file. But that’s slow, somewhat labor intensive, and involves re-encoding the video and applying a new round of video compression. And even if it’s not immediately obvious to the naked eye, that new round of compression inevitably involves some quality loss.

Sometimes you might just want a quick method to join MP4 clips back together without the hassle of going through a video editing app and re-encoding the file.

There are apps that can do that. They simply join the clips back together without re-encoding the video and applying another round of compression. So you don’t lose any quality, and it’s usually much quicker.

The one I’m focusing on here is MP4Joiner. It’s free, it does what it says it will do, and it’s open source, and cross-platform, with versions for Windows, Mac, and Linux. There’s nothing specific to GoPro about it–it works with any MP4 file. You can download it here.

There’s also not much to it, so this is a pretty brief guide.

Once you’ve opened MP4Joiner, you simply drag and drop the MP4 file segments created by the GoPro directly onto the app. One thing to watch, though, is that you only add the MP4 files and not any of the associated preview or metadata files. So don’t include any THM or LRV files, for instance.

It’s pretty basic. If you want to reorder them you simply add them in the order you want–there’s no drag-and-reorder option. You don’t need to select only some of the displayed clips–nor can you, for that matter–it will join all the clips that are imported into the app.

The stats down the bottom will tell you the total duration of the combined clips as well as the total size of the file that will be generated.

You can specify where you want the joined MP4 saved, but that’s about it.

And the options are pretty basic. You can force it to re-encode the video, but most of the time that’s probably not what you want, and if it is what you want you probably don’t want to do it in this app.

Once you’ve saved the new file, you can use it just like any other very large MP4 file. And because it has been joined, not re-encoded, there’s no quality loss.

Some Reasons Not to Join GoPro MP4 Videos

Joining segmented video files to make one very large file isn’t always a good idea. Sometimes bigger isn’t better, and multi-gigabyte data files can fall into that category. So there are times you might want to think twice before doing it.

The main reason GoPro cameras split up the videos in segments just under 4GB is that some common filesystems have a 4GB limit as the maximum size they support for a single file. That’s true of anything using the old FAT32 filesystem, like old versions of Windows, for instance.

There are some obvious places you might run into that. It shouldn’t be an issue with most computers newer than a few years old—most new operating systems use newer filesystems like exFAT or variations that support much larger individual files.

But it might be an issue with the storage systems that the computer interacts with. For example, even new microSHDC memory cards (and the larger SDHC cards) use FAT32. If you’re backing up to an external hard drive, it might be formatted as FAT32, especially if it was formatted to be broadly compatible with several different operating systems such as Mac and Windows. And online cloud backup services often have a maximum file size limit that’s within range of the kind of filesize you’d get from joining GoPro video segments. Trying to upload a 20GB video file to a service that has a 10GB maximum file size isn’t going to work.

If you are backing up your videos to the cloud, here are some file size limits for common cloud backup services:

Another reason not to join segments is that working with very large files can be very slow and can bring some computers to a grinding halt.

And joining video segments with third-party tools will likely remove any GoPro-specific metadata such as GPS and onboard sensors.