NiteCore is releasing a new charger for GoPro HERO5 Black batteries. It adds a few little nice tweaks to make it stand out from the competition. 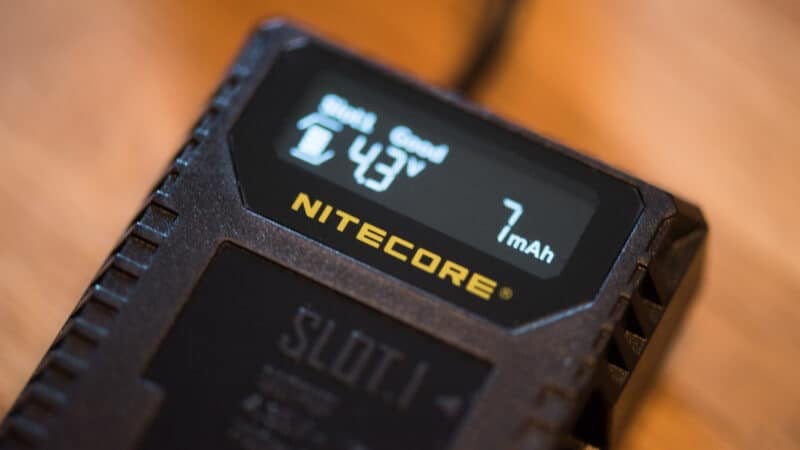 There are several different after-market chargers for GoPro batteries available. Most of them are some variation of a standing dock, some for two or three batteries.

For one, there’s a screen on this one. Most chargers rely on some variation of an LED light flashing or changing color or both. This one gives you more precise feedback in the form of a percentage charge. I like that better because it gives you a better sense of how much longer it’s going to take to charge.

For another, the USB cable is integrated into the back of this charger, folding away needly into a recess on the bottom. It means you don’t have to worry about packing a separate cable.

This is a dual charger. You can charge two batteries at once or do them individually. The batteries slide into the dock from the side.

The overall design is an improvement over the bulkier design of the one for the HERO4 batteries. It’s a bit bigger than the GoPro Dual Charger, but it’s also shallower.

It’s designed to detect the correct current and adjust automatically. If it finds any abnormality, it’ll shut off the current and display EE on the screen.

It’s also designed to be universally compatible with USB power sources. That means you can use an AC power adapter (not supplied), an external powerbank, or other sources like car adapters, etc.

This charger outputs a maximum of 750mA to each battery dock. So it’s not a high-speed charger that will make full use of the extra current supplied by something like GoPro’s Super Charger.

The standard package doesn’t come with an AC adapter or batteries.

The NiteCore UGP5 performs the same basic function as most other GoPro battery chargers, but it has a few extra little tweaks that will appeal to some users. Namely, there’s a screen that gives more a precise readout on charging status as well as an integrated cable on the back. And while the device is larger than a GoPro Dual Charger, it’s still very compact and packable.

The one I’ve been using is a pre-release version, and they’re not yet available through the stores. I would expect them to appear alongside other NiteCore gear on Amazon. You can find more details on NiteCore’s website.