A Floating Grip, Tripod & Selfie Stick in One

The Nu Grip is a GoPro and action camera accessory that combines 4 key functions in 1: grip, selfie stick, tabletop tripod, and float. I’ve been testing it out, and here’s my take on it. 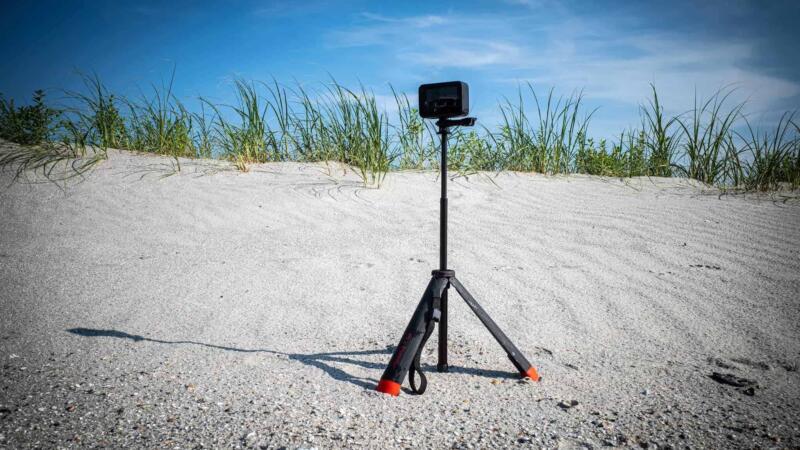 I’ve previously covered floating poles for GoPros and other ways to keep your GoPro camera afloat. British accessory company Nu Bear has just come out with a new one, the Nu Grip. It’s a floating, extendible pole, but the feature that sets this one apart from the pack is that it can also be used as a small tripod. So Nu Bear can legitimately claim that “Nu Grip is the first tripod grip to float.”

The Nu Grip will work with any GoPro. It uses the standard GoPro three-pronged mounting system. They released this just before GoPro released the HERO9 Black, so they didn’t have a chance to include that in their compatibility list that’s printed on the box. But it works just fine with the HERO9 Black as well as every previous GoPro.

And while I’m focusing here on using with GoPros, it’s not only for GoPros. It will also work with a bunch of other action cameras and other small waterproof cameras. So cameras like the DJI Osmo Action, any of the other GoPro alternatives like the AKASO cameras, or even cameras like the Sony RX0. It will even work with smartphones, although you’ll need to pick up a waterproof case and holder for those separately (the Nu Grip doesn’t come with those).

The Nu Grip is a 4-in-1 accessory. These are the four core functions.

With the three arms folded in, it becomes a grip to more conveniently hold your GoPro while shooting. There are some small magnets in the bottom of the arms that help them keep closed, but they’re only minimally effective—it’s pretty easy for the arms to separate and splay. I’d actually prefer a more solid locking mechanism, but that would add more moving parts and make it a little less convenient in going from grip to tripod.

There’s also a small attachment point at the top of the grip that you can use with the wrist strap (which is included).

There’s a center column that extends out to transform it into a selfie stick. It’s not an especially long one, but it’s long enough for many uses.

Extending it is easy—you just twist, and the extension slides out. It locks in place with another quick twist.

The main body of the grip is made up of three hollow legs that splay out to create a tabletop tripod.

You can have the extension column out or retracted while using it as a tripod.

GoPros (and most other cameras) by themselves will sink. There are various ways to make them float; some are more convenient in some situations than others.

Among its key features is that the Nu Grip is designed to make your GoPro float. And this is probably the feature that creates the combination that most makes the Nu Grip unique.

It works just like a bobber, meaning that it floats upside down with the bottom of the pole sticking up (they’ve colored the end bright red, which is helpful for visibility when bobbing in the water).

But it’s only fairly slightly positively buoyant, which means that if you’re Scuba diving or just diving deeper under the water, the upward pull is minimal and not going to cause any real issues or upset your neutral buoyancy. It’s rated down to 18 meters, which is around 60 feet. Below that, and the hollow arms might start leaking.

I’ve used it in freshwater and saltwater—a lake and in the ocean—in both places with a GoPro HERO9 Black—and found it to float as expected. If you’re using it with a different camera, it’s well worth testing the buoyancy in controlled conditions before using it in the wild.

One of the headline features listed on the box is that it has magnetic tripod legs. And it’s true-the tripod legs have tiny magnets in the end. These are for holding the legs together when you’re using it as a grip. But when I first saw that feature, I assumed it meant that you could use them for mounting to metal surfaces. But that’s not the case—they’re not nearly strong enough to use for mounting.

It has a GoPro attachment directly. So you don’t need a separate adapter to screw on. The advantage of having it fused to the grip’s body is that it reduces the risk of loosening (and wobble) or even detaching completely at an inopportune moment. And usually, it also means that the connection is more rigid and there’s much less risk of any wobble. It doesn’t really work that way here, because the center of the column is the extension pole. So there’s still a bit of a wobble in this case.

But what sets the Nu Grip apart is that it combines four core functions into one lightweight and highly portable accessory. Nu Bear calls it a 4-in-1 floating, extendable, grip, & tripod. Which is a bit of a mouthful, but it’s as good a description as any of what it does. They also describe it as “the most versatile GoPro and DJI action camera grip in the world.”

And when it comes down to it, that all adds up to convenience. If you’re traveling or heading out on an adventure—whether for a day or a month—only having to manage and pack one all-around accessory rather than multiple more specialized ones has its virtues.

Where to Find It

You can order the Nu Grip directly from Nu Bear’s website. I haven’t noticed them turn up at other retailers yet.

2 thoughts on “A Floating Grip, Tripod & Selfie Stick in One”

A Floating Grip, Tripod & Selfie Stick in One