An Extended Battery in a Waterproof Housing for the GoPro HERO7, HERO6 & HERO5 Black

If you’re after an extended battery for the GoPro HERO6 Black or HERO5 Black that’s waterproof, the new Oumers Side Power is one of the few options available. 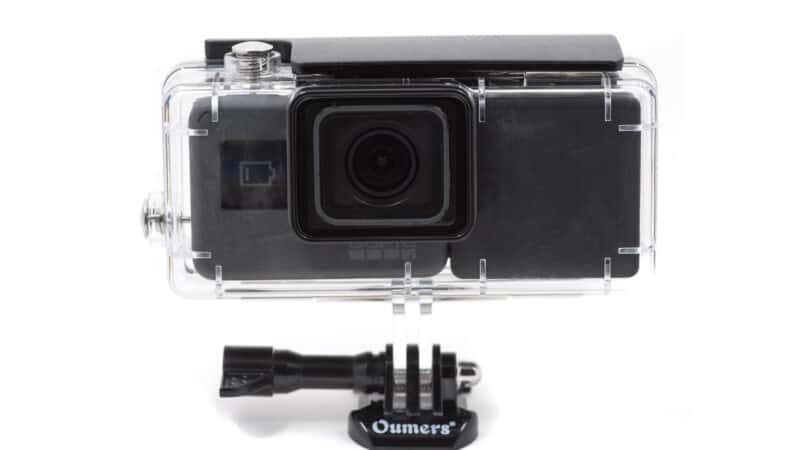 UPDATE: Since I originally posted this, the Oumers Side Power (model FLW501) has been discontinued and does not appear to be available in stores anymore. It’s possible that you might be able to track down used copies.

Battery life is one of those things I’m always battling with GoPros. I’ve written before about a couple of different extended battery options that work with the GoPro HERO7 Black, HERO6 Black, HERO5 Black, and HERO (2018).

One is an extended battery that clips onto the side and back of the camera and is held in place with a frame housing. The other was a battery stick. Both suffered from the same disadvantage of not being waterproof. 1

A number of the older models of GoPros had a connection port on the back of the camera that could be used to attach a battery, and GoPro had their own extended battery solution called the BacPac that did just that. But the newer cameras don’t have that port, so they’re not compatible with the BacPac accessories.

Instead, the extended battery solutions have to plug into the USB-C port on the side of the camera. GoPro hasn’t released its own extended battery for these models so far, but aftermarket brands have started to.

Wasabi Power was first out of the gate. Their simply titled Extended Battery added a little extra width but pushed most of the design to behind the camera, blocking the camera’s back screen. And they couldn’t get a waterproof housing ready in time, so for now it’s only available with a non-waterproof frame housing.

There’s a new option now available under the Oumers brand (not one I’ve heard of before) called the Oumers Side Power (model FLW501).

It too plugs into the USB-C port on the side of the camera, but instead of wrapping around the back of the camera, it sits to the side. So you can still see the screen. And its distinctive feature is that it comes with a waterproof housing from the get-go.

It’s compatible with these models:

It’s not compatible with the HERO8 Black. That camera has a new design, and the USB-C port is in a different position. So the new camera body design won’t fit in the Side Power’s housing.

It’s not a particularly pretty solution, and there are definite downsides in this implementation. The result is quite wide and turns it into about the size of a standard compact camera. So you do lose the benefit of GoPros’ small size. That can be more than an issue of convenience, especially if you’re filming in tight or windy conditions.

The back door of the housing is solid plastic, so while you can see the back screen, you can’t use it with touch control (and voice control doesn’t work well with it).

And the extra battery adds extra heat in an enclosed space, which can be a problem in humid or damp conditions with fogging. A couple of sets of anti-fog inserts are included, but you’ll probably want to pick up some more.

The battery is rated for 2300mAh, which is almost double the capacity of the standard GoPro battery (1220mAh). And it’s used in addition to the standard battery, meaning you get the battery life of both added together (although it’s technically possible to use without the internal battery installed).

The amount of time that will give you is going to vary based on various factors including the shooting mode you’re using and even the outside temperature (lithium batteries perform poorly in very cold temperatures). But in general you reasonably expect to roughly triple your shooting time, give or take.

It comes standard with a waterproof housing that’s rated down to around 150 feet (45 meters). Aside from being unusually wide, it’s basically the same as the waterproof housing in older models of GoPros, with the same kind of clamp clip on top and buttons.

To attach the battery you’ll need to clip off the side door. It’s very easy to clip on an off. It’s also very easy to lose–if you need new ones you can buy them as spare parts.

The camera+battery combination then simply slips into the housing just like normal. There’s no special attachment or finicky finger gymnastics that some other extended batteries require.

It works with the HERO6 Black and HERO5 Black. It won’t work with other models, including older models or any of the Session models.

If you ran into GoPro’s nasty little surprise in its firmware a while back that prevented third-party batteries from working in their cameras, it’s natural to wonder whether they might do that again. I don’t have a definitive answer, and it’s impossible to rule out, of course, but there’s some degree of confidence in it not happening with this battery because it connects via the external USB-C port. The ones GoPro blocked previously with their firmware update were internal batteries.

It works. As expected, the amount of extra time I get varies according to the usual factors, but I’ve been getting roughly triple the usual times before both batteries are flat.

The housing seems solid and doesn’t seem to have any obvious weak points, although I haven’t taken it to depth to test how it does under water pressure. In snow and rain, it has worked just fine.

The unit I bought was new in a box, but the housing was still a bit scuffed–the kind of non-premium finish you often get from some of these after-market suppliers. It hasn’t affected the performance, and the lens port itself is clean and clear, with the lens port and back panel both coming protected by a peel-off protector.

When shooting in the high-end video modes, the HERO6 Black and HERO5 Black cameras get hot just by themselves. Enclosing them into a sealed housing that limits their ability to air cool makes that worse. While I haven’t had the camera shut down from overheating when using the housing, there is definitely a higher risk of it doing so in some conditions. There’s also a good chance of lens fogging if you’re using it in humid or damp conditions or underwater, so using anti-fog inserts is a useful precaution.

I bought mine at Amazon.

UPDATE: Since I originally posted this, the Oumers Side Power (model FLW501) has been discontinued and does not appear to be available in stores anymore. It’s possible that you might be able to track down used copies.

Images and product information from Amazon PA-API were last updated on 2023-02-05 at 21:59. Product prices and availability are accurate as of the date/time indicated and are subject to change. Any price and availability information displayed on Amazon Site at the time of purchase will apply to the purchase of this product.

An Extended Battery in a Waterproof Housing for the GoPro HERO7, HERO6 & HERO5 Black