If you’re looking to add polarizing or ND filters to the GoPro HERO7 cameras, the HERO6 Black, HERO5 Black, or HERO (2018), PolarPro has a 3-pack kit of snap-on filters specifically for these camera models. Here’s my hands-on review. 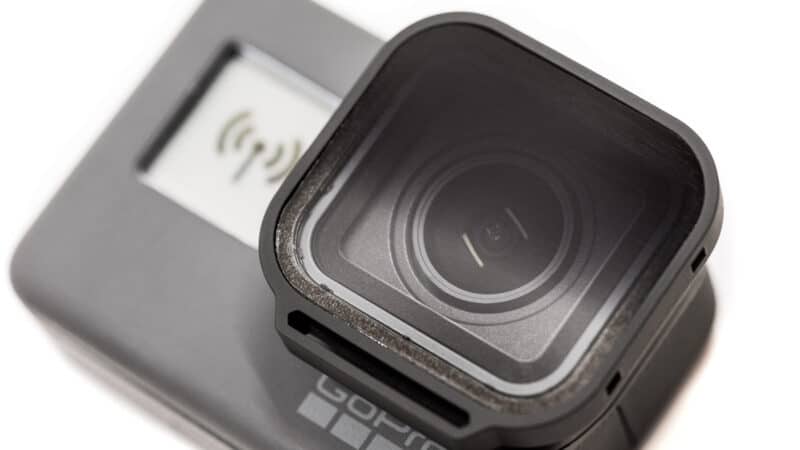 If you’re looking to add polarizing or ND filters to the GoPro HERO5 Black or HERO6 Black, you’re pretty much limited to snap-on filters. Because the camera’s own case now doubles as the waterproof housing, there’s no way to insert something between the camera’s lens and the housing’s lens port, as you could with older models. 1

I’ve previously reviewed PolarPro’s ND and polarizer filters for older models of GoPros. And while those older ones were also snap-on filters, they were rather large and cumbersome. PolarPro has come up with a new design for their HERO5/6 Black filters that’s a much more slimline and fitted approach. 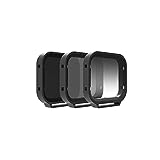 The packaging only mentions compatibility with the HERO5 Black, but they work just as well with the other cameras that share the same body design. That includes the three HERO7 models, the HERO6 Black, and the HERO (2018).

All of these filters snap onto the front of the lens port. They’re held in place simply by friction.

That’s enough for controlled shooting, but if things are getting a bit more active it’s quite easy for them to bumped off.

Because of that, there are tethers included. They’re nothing fancy–just bits of nylon string–but they get the job done. And because the filters themselves are so light, the tethers don’t need to be very strong. They thread through loops on the bottom of the filter frames. One thing to watch for is that you keep the tether snug so that it doesn’t drift up in front of the lens and block your shot.

These aren’t waterproof filters, and it’s very possible for water to seep in around the frame and get in between them and the lens port. That’s not going to compromise the waterproofness of the camera in any way, but it might create ugly water drops on the lens. These aren’t the types of filters you’d be wanting to use underwater anyway–you’d usually be looking at red or orange filters for that–but it’s still something to keep an eye on when filming in damp conditions.

A polarizer filter is useful for reducing glare in the sky or from water or snow. In doing that, it can also lead to more vibrant colors, especially in blue skies. But they don’t work equally in all directions. How much effect they have depends on the angle from the light source such as the sun. It’s for that reason that they can be problematic to use on very wide-angle lenses because you can end up with uneven effects.

If you’re coming from the world of larger cameras, you might be used to circular polarizers that rotate. This isn’t one of those. It’s a static filter that stays in place on the camera in one position.

I found that it does have some effect, but it’s not as dramatic as you might expect from a typical polarizer. Here’s a side-by-side example, with the first shot taken without any filter and the second with the polarizer attached. As you can see, there is some effect in bringing out the color a little more on the grass and some other areas you can notice it working, but overall its effect is slight. 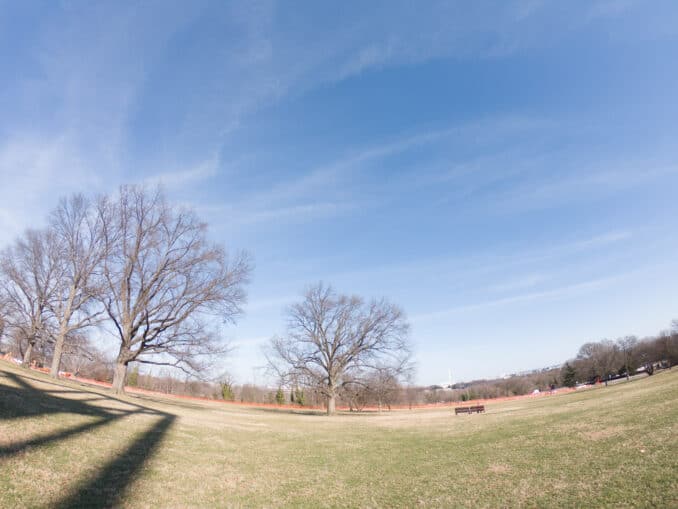 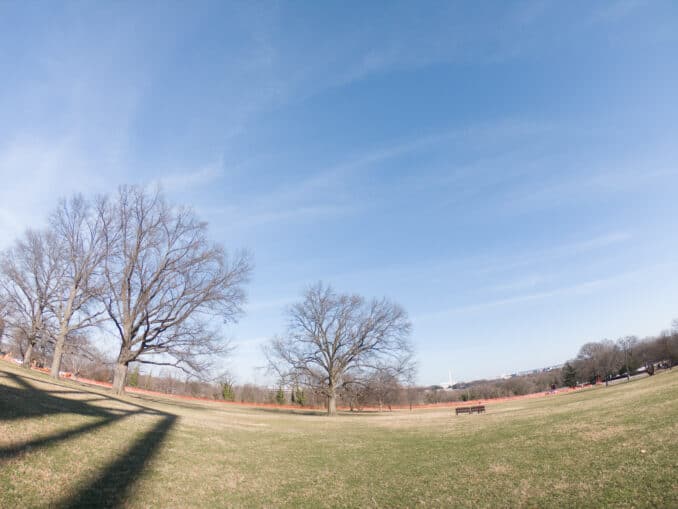 Standard neutral density filters block the amount of light reaching the sensor. And unlike the polarizer and even graduated ND filters, a standard ND filter ideally shouldn’t change the look of the image. Instead, they’re basically a hack. Since you can’t control the aperture on GoPros, and there’s a fairly limited span of ISOs available, using a ND filter is a way to manipulate the shutter speed while still maintaining proper exposure.

There are a few common scenarios where this comes in useful when shooting with a GoPro. One is to slow down the shutter speed to match a slower frame rate, such as 24fps, that can give you a smoother and more cinematic feel to your footage. This is something that can be especially useful if shooting from a drone to add a slightly more floaty feel to the footage.

Another use applies the same idea to shooting time-lapse. By deliberately dragging the shutter to add some motion blur to moving objects in the frame, it can result in much smoother time-lapse footage that looks more natural rather than the jumpy, staccato look you can get at very fast shutter speeds.

It might also be useful if you’re shooting in exceptionally bright conditions–perhaps snow or ice or even at a sandy beach–so as to keep the exposure within the GoPro’s shutter speed limit.

A less-common but still potential scenario is when shooting out of a plane or helicopter or even through the props of a drone, you can reduce the shutter speed to blue the blades out completely and prevent them from becoming a distraction. Here’s a quick example.

Ideally, a standard neutral density filter should be, well, neutral. But in practice, only very high-end filters come close to being perfectly neutral. Most add a bit of a color cast, often a slight bluish tint. And that’s what this one does. You can see the color cast here–I’ve used the same white balance setting for both. The first shot is without any filter; the second is with the neutral density filter. 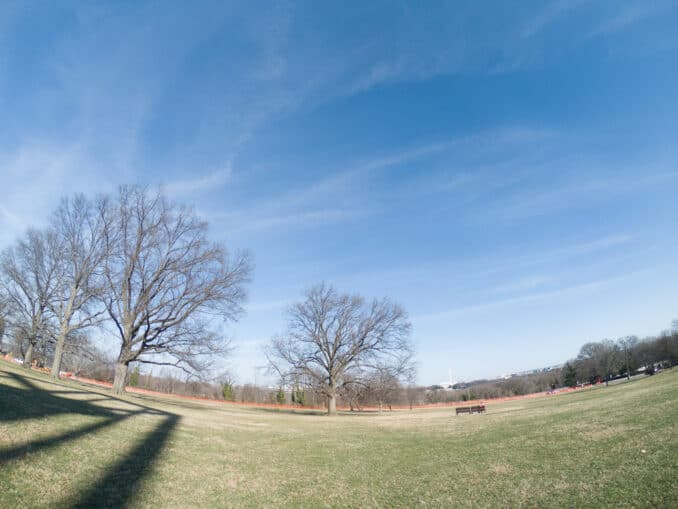 Now, whether that’s a bad thing is entirely up to you. It’s something that is probably more of an issue with the more precise shooting you’re likely to be doing with a larger camera, but with a GoPro not so much. There are, of course, ways to compensate in a video editing app. Or maybe you simply don’t mind the look of the blue tint. Regardless, it’s worth knowing it’s there.

Neutral density filters come in different strengths. This different strengths are given ratings, but manufacturers have never really been able to agree on a common rating system, so there are at least three different ones you commonly come across. This particular filter is rated as ND8. That means it reduces the light by 3 stops of exposure. Sometimes this strength is also referred to by its optical density of 0.9. And sometimes you can see them rated as 8x ND filters. So if you the shutter speed is 1/200 without a filter and all else remains the same, it will be 1/24 with the ND8 filters.

With video it gets a little more complicated because you can be working with shutter speeds as multiples of frame rates, but the same underlying principle applies that you’re manipulating the shutter speed. But it also means that individual ND filters are pretty blunt instruments. ND filters where you can change the strength do exist–they’re known as variable ND filters–but they tend to be expensive, and I’m not aware of any specifically for GoPros. Most ND filters, then, are single-strength. So in an ideal world you’d have a kit of several of them, each with a different light-blocking strength. The 3-stop filter in this kit is a good, versatile compromise, but it’s not always going to be the ideal strength for every shoot, especially in very bright or dim lighting.

The last of the three filters included in this pack is a graduated neutral density filter. That means that it’s darker at one end and clear at the other, transitioning gradually in the middle of the filter. Most of the time you’d use this with the dark end at the top to reduce the brightness of the sky to even out with the darker lighting of the ground.

In this particular filter, the darkest section reduces light by 3 stops. The gradation is in the middle of the frame, and there’s no way to slide it up or down. Here’s the effect side-by-side with a no-filter shot. 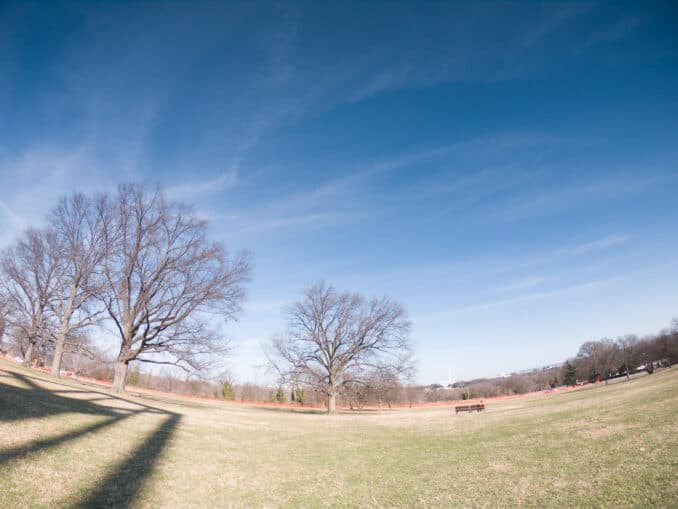 One thing I have found is that the exposure compensation function on the camera can come in useful with this filter because the auto-exposure meter can get thrown off trying to compensate. That’s why, in the example above, while the sky is darker with the filter attached, the grass is actually brighter.

The thing about GoPros is that the whole point of them is that they’re rugged. They can go places that cameras have no right to go. And it’s not just about what the camera goes through when it’s mount. If you’re out surfing or skydiving or mountain climbing or trail biking, it’s not ideal conditions for calm, gentle handing of your gear.

These filters are designed to be very lightweight, in part to make them suitable to use on drones. But there’s a blurred line between lightweight and flimsy depending on conditions. And that’s where these filters can come a cropper. While having glass filters is a good thing for optical quality, when they’re as thin and light as this glass is it can become very brittle. So you do have to be quite careful not to snap them, especially by accidentally twisting them as you’re putting them on or off.

And while I haven’t run into this issue myself, a number of other users have complained of the glue holding the glass in place coming unstuck.

The kit includes the three filters, a couple of lens cloths, and some nylon string tethers. The small case that the filters come packaged in is also a useful carry case for them.

You can find this kit at B&H Photo and Amazon.