How to Remove the Fisheye Effect from GoPro Videos

That distinctive fisheye look isn’t always what you want. Here’s how to remove it from GoPro videos with the free GoPro Studio app. 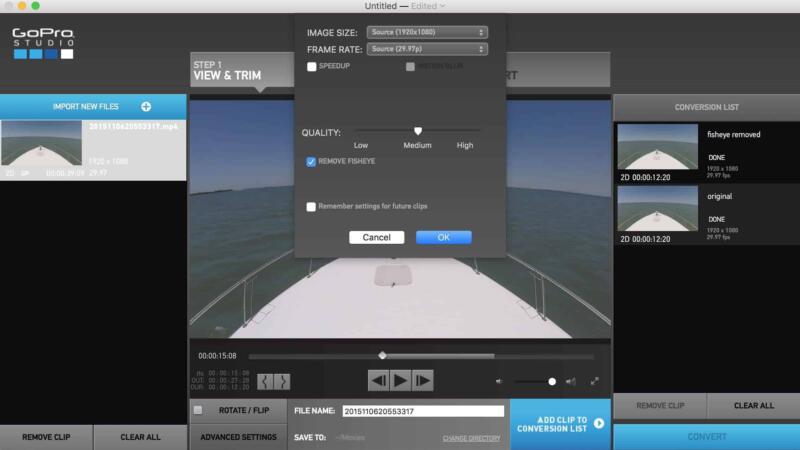 I’ve written about how to remove the fisheye effect from GoPro photos before. But it doesn’t work the same way with GoPro videos.

GoPro Studio is no longer available and isn’t compatible with some of the latest 64-bit-only operating systems (such as macOS Big Sur). And Studio wasn’t updated for this method to work with the GoPro HERO5 (or later) models. But if you already have GoPro Studio installed, are using an operating system that remains compatible with 32-bit apps, and are using a GoPro HERO4 or earlier, this method should still work.

To remove that distinctive ultra-wide-angle look from video footage, the best and quickest way us to use the free GoPro Studio app.

There’s no real trick, as such–it’s a feature built into GoPro Studio. But it doesn’t come in the part of the process you’d necessarily expect it to. That is, rather than doing it in the editing screen where you adjust colors and tones and audio and titles, etc, you do it in the first step of preparing the video file for editing.

In the GoPro Studio workflow, you apply it when going from Step 1 to Step 2. So when you’re first opening the file in GoPro Studio, click on the Advanced Settings button at the bottom.

And then choose the Remove Fisheye option.

You won’t see any difference in the version you see in the main part of this screen–it doesn’t show up in the preview panel. Then click on the Add Clip to Conversion List button, and you’ll see it appear in the right panel.

You can, if you like, add more than one version to the conversion list, one with the original fisheye and one without.

Once you run the conversion list and move to Step 2, the editing part of the workflow, you’ll get the converted non-fisheye version amongst your clips, and you can now see the results.

And now you can continue on with your editing just as you normally would or export the clips to continue editing in something else like Final Cut Pro.

Here’s the before/after footage. The most obvious result is that the horizon is straightened. There’s also some of the frame lost on the side as the field of view narrows a bit.

It’s worth noting that this only works with GoPro footage that hasn’t been otherwise edited.

It’s also worth noting that this only works with GoPro video footage. The option isn’t available when working with still photos in GoPro Studio. So for still photos you’ll need to use something else–here’s how to do it in Lightroom.

This isn’t the only way to correct the fisheye in GoPro footage.

If you’re using Final Cut Pro or Adobe Premiere, there are wide-angle distortion correction plugins that do a very good job, like this one.

And you can do it in Photoshop, if you’re so inclined, by using third-party tools available through Adobe Exchange.

There are also some third-party alternatives like this premium plugin (ie. costs money) for Final Cut X from the folks at Crumblepop.

How to Remove the Fisheye Effect from GoPro Videos