If you’re looking to mount your GoPro to a flat surface like a car windscreen, surfboard, jet ski, or kayak, there are several different options for suction cup mounts depending on your needs. Here are some of the best. 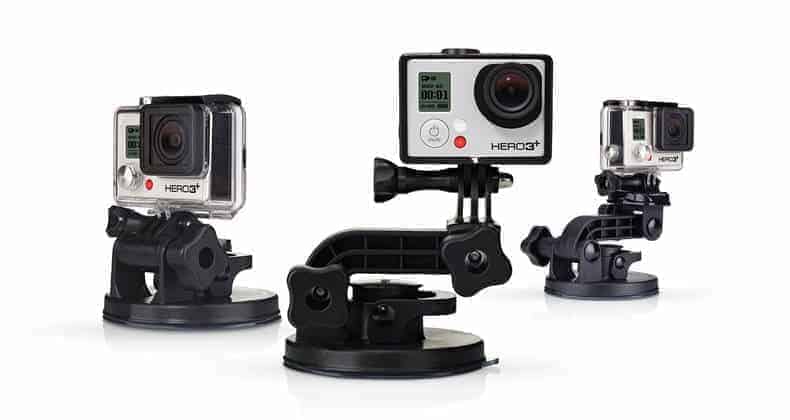 Because they’re small, light, relatively inexpensive, and come standard with a waterproof case or housing, GoPro cameras can go in places many other cameras can’t. If you’re holding or wearing the camera, you can get great POV footage. But sometimes you want the camera to stay put. And for that, you’ll need to create a secure mount.

If you’re looking to mount your GoPro to a flat surface like a car windscreen, surfboard, jet ski, or kayak, there are several different options for suction cup mounts depending on your needs. Here are some of the best.

Because all the GoPros use the same adapter, all of these mounts will work with most GoPro camera models.

This is the official GoPro Suction Cup Mount. 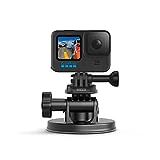 On the plus side, it’s light, has a slim profile, and comes with a dedicated GoPro fitting. On the negative side, its hinges each works only on one plane, so if you need to adjust the angle by rotating, you have to undo the suction and reattach it. And while it locks well, it feels a bit cheap and plasticky. It doesn’t like repeated uses in salt water–the few metal parts on the mount corrode after a while. I use this suction mount when I need a quick and easy solution, and it’s easy to throw in the bag and take with you. In short, it works, it’s convenient, and it’s portable, but it’s not the strongest or necessarily the best suction mount you can get for your GoPro camera.

You can find them at GoPro.com, Amazon and B&H Photo.

The Delkin Fat Gecko Mini suction cup mount offers similar characteristics to the official GoPro Suction Cup Mount, but the addition of a locking ballhead at the top attachment gives more flexibility in adjusting the angle. 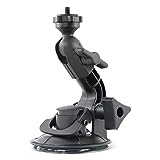 Some versions of this mount include the GoPro attachment, some don’t. If it doesn’t, you can add a GoPro tripod mount easily (and it means it will also work with your other cameras).

You can find them at Amazon (don’t forget the GoPro tripod mount) and B&H Photo (includes GoPro attachment).

RAM Mounts make heavy-duty options. On the plus side, it’s strong—the suction is very strong and the locking mechanisms very securely. The fittings all use top-quality materials which are a step up from the cheap plastic used in GoPro’s own mount. The main shaft is metal, and the ball locks are a very strong rubberized plastic that grips very well in different temperatures and precipitation.

One of the things I particularly like about this suction mount is that it’s very easy to position at all sorts of different angles with one locking mechanism locking both ends of the shaft at once. That makes it ideal when mounting on hard-to-reach surfaces.

I use this suction mount for more serious installations where I need both a very secure grip and maximum flexibility in adjusting the angle–it’s the suction mount I use most often. I also use non-suction cup RAM mounts when installing long-term time-lapse cameras outdoors where they’re exposed to all kinds of weather. They stay locked in wind and changes in temperature and don’t corrode easily.

You can find them Amazon.

Joby are best known for their distinctive Gorillapod mini tripods and gripping stands. They’ve also released a range of mounts for action cams. A feature of them is that they offer interchangeable, articulating arms that fit on clamps and suction cups. In that respect they’re functionally similar to the RAM system, but the Joby range is made of lightweight plastic rather than the metal of the RAM mounts. That makes them less strong, but it also means they’re lighter.

Joby also has a version of this suction mount using the distinctive Gorillapod-style flexible arm.

I have a detailed review of some of the mounts in these series, including the suction cup, here.

The suction cup comes either with a locking arm or a Gorillapod Arm.

This is actually a combination of two products. The Cinetics miniSquid is a kit of three suction attachments that attach to the legs of a Joby GorillaPod 5K (There are several different models. The miniSquid was originally paired with the GorillaPod Focus, but that model has been discontinued. But the 5K model reportedly has the same ball diameter and is compatible with the miniSquid.)

The miniSquid part is a scaled-down version of the original CineSquid system to make it more appropriate for something of the GoPro camera’s size. When used in combination with the GorillaPod it some rather unique features that can come in very handy.

Firstly, and most obviously, it has 3 small suction cups. That can be very useful on surfaces that aren’t perfectly flat.

Secondly, there’s a lot of maneuverability because of the long flexible legs. This adds versatility.

But with that flexibility comes a downside: those flexible legs aren’t quite as rigid as some of the other options above, meaning that in some uses like high winds there might be a bit of camera movement. So it all depends on whether flexibility or rigidity is more important to you.

You’ll have to buy the miniSquid and the GorillaPod separately. And it doesn’t come standard with a GoPro tripod mount, so you’ll need to get one of those as well. And as an alternative, you can replace the GorillaPod with a Cinetics SkatePlate.

This thing is solid. Very solid. It’s made of a combination of metal and plastic. With two suction cups rather than just one, you have extra suction and extra security. 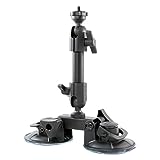 On the negative side, it’s heavy and is probably overkill for most GoPro uses. I use this with DSLRs and in cases where the surface I’m attaching to isn’t as flat as I’d like so I need the extra security of a second suction cup. You can also get a modified version that adds a Fat Gecko Mini to the side to create a triple suction cup mount. The standard unit does not include a GoPro attachment, but you can add a GoPro Tripod Mount easily (and it means it will also work with your other cameras). 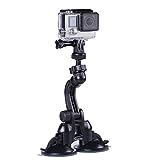 When Not To Use a Suction Cup Mount

When using any of these suction cup mounts, there are some things to keep in mind. The most important is that the strength and durability of the suction depends on several factors.

The mounting surface should be flat and smooth. Even slightly textured surfaces, like you often find on kayaks or surfboards, can reduce the effectiveness of the suction.

It should also be clean–bits of dirt or dust can break the seal.

The suction strength is also affected by changes in temperature. For example, if you mount it on a cold piece of glass and then move that glass into the sun, the sun’s warmth will affect the small amount of air still left between the cup and the glass and could easily weaken the seal. In general, suction mounts are often not suitable for long-term mounting, especially outdoors.

Images and product information from Amazon PA-API were last updated on 2023-02-01 at 14:38. Product prices and availability are accurate as of the date/time indicated and are subject to change. Any price and availability information displayed on Amazon Site at the time of purchase will apply to the purchase of this product.