A timelapse video clip I shot recently in the Arctic with a GoPro HERO5 Black while our ship was crunching through the Arctic sea ice north of Svalbard. 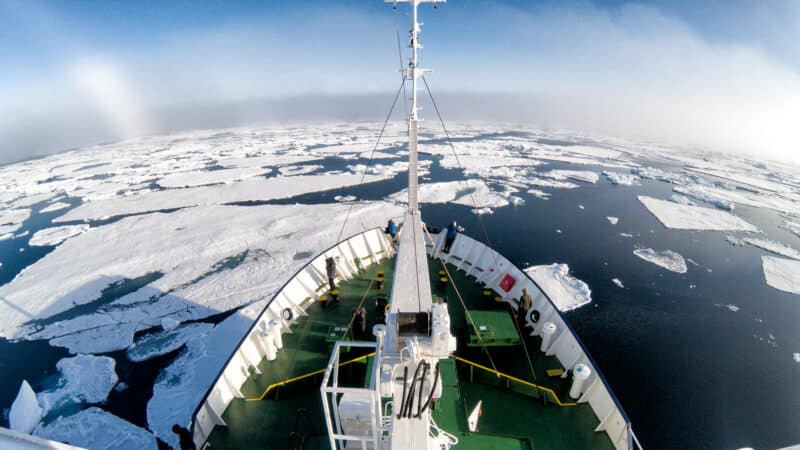 I recently got back from a trip to the Arctic. This is a fun timelapse clip I shot while I was there. It was taken with a GoPro HERO5 Black.

I shot it while our ship was punching through the polar ice pack above 80° north, off the coast of Sjuøyane, a group of seven islands at the northernmost tip of Svalbard. It’s in the Barents Sea well north of the Norwegian mainland. ⠀

The ship, the Polar Pioneer, operated by Aurora Expeditions, isn’t a true icebreaker–that’s a specific kind of design that’s quite different–but with an ice class 1A ice-strengthened hull, it can go places most ships can’t and deal with light sea ice.

The timelapse makes it look like we were moving fast, but that’s deceptive. Even with a strengthened hull, it can still be very dangerous just crashing into ice. As you can see, some pieces of ice are thicker than others, and from time to time some brought us to a sudden halt. The fastest we were moving through this area was 3 knots, and the captain and crew up on the bridge were on high alert the whole time.

We weren’t just crashing through the ice pack because we could. We were looking for polar bears (and found some, but that’s a different post). This is precisely the kind of drifting ice pack where they, and seals they feed on, live on during the summer.

I have more information on the this drift ice here.

This was a very simple setup: a GoPro HERO5 Black mounted on a Jaws clamp (without the goose neck). The clamp was around one of the ship’s rails on the top deck, and the tension was plenty strong enough to keep the camera still relative to the ship, even when we rammed into some of the heavier ice that brought the ship to sudden halt.

I had a bunch of different cameras on hand, but it was hard to beat the combination of simplicity and wide view of the GoPro. Just attach it, press the shutter, and this is what came out. And heavier cameras would have required a more robust mounting method to prevent the shudder every time we hit some ice.

It was shot in timelapse video mode in the 1080p setting. There are a few different segments used here. Some were filmed with a 1-second interval and others with a 2-second interval. I wanted to keep it fairly fluid and not too jumpy, which is why I used the short intervals. None of the segments were long enough to warrant using an external battery.

The still photo at the top of the page was also taken with the same camera, this time in the photo mode using the RAW (gpr) file setting and Protune turned on.

The editing, audio track, and titles were added in Final Cut Pro X. Some sections were retimed in Final Cut to speed them up further to keep the whole thing to a reasonable length.