Ugly water drops on the GoPro lens can really ruin the shot. The XClear Hydrophobic Lens Protectors are designed to solve this problem. Here’s my take on how well they work. 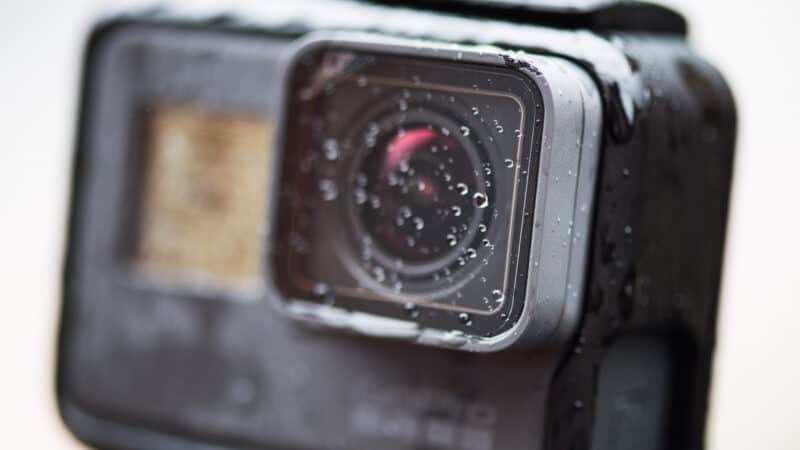 I’ve had more than a few photos and videos ruined by large water drops on the front of the lens. Many were when using GoPros. It’s certainly not something that’s unique to GoPros, but because there’s a good chance you’re using it in the wet and because of the extremely close focusing of the lens, the problem can be especially pronounced.

When I was looking for an example to illustrate the point for this post I realized that I didn’t have many for the simple reason that the drops usually ruined the photo, so I delete them. In other words, they’re instantly rejects. But here’s a quick example of what I mean from a recent trip kayaking in the Arctic. The camera was mounted on the front of the kayak, so most of the time it was out of the water, but there was no way to avoid it getting splashed pretty regularly.

Here’s another that was taken with a different camera but illustrates the same problem:

There are several different strategies to tackling this problem–more on that below. But I’ve recently been trying out XClear’s hydrophobic lens protectors.

They’re not really filters, as such. They’re much more like the kind of plastic film you might have used for a smartphone’s screen protector. But these do have one extra key feature: they’re treated to have water repellent properties so that the water beads easily and doesn’t pool in large drops on the lens.

In terms of hydrophobic performance, I was most concerned with the lens port on the front and much less so about the camera’s screens. But I did fit them and found that they didn’t negatively impact the touch screen on the back–it still works as normal.

Putting it on is relatively straightforward but still a bit finicky. After making sure that the lens glass is clean, you need to peel away the light film over the adhesive side and put it on the lens. It’s not easy to tell which side is the adhesive side, so it might take a bit of trial and error.

Once you’ve attached it to the lens, you peel off the other side’s protective film.

I did find it a bit tricky to avoid air bubbles, and the filter itself is pretty easy to scratch. But if you’re careful you shouldn’t have too much trouble getting it on cleanly.

To test how well it works, I used two HERO5 blacks side-by-side. One had the XClear film installed; the other didn’t. I tried three different ways of putting water on the lens, each of which might be the type of thing you’d encounter when shooting with a GoPro. The first was a dunking the camera and pulling it out of the water and then shooting, as you might if you were swimming or surfing or snorkeling. The second was a much heavier dousing with water of the kind of thing you might get from waves splashing. The third was a misty spray that you might get from light rain or wave spray.

Of course, even side-by-side examples like this aren’t perfect because there’s always going to be some natural variation with what water drops form where. But it became very clear very quickly that the film does have an effect. The catch is that depending on the type of wet, that’s not always a good thing.

First, the dunking. This is where I found the water repellent film to work best. Without it, the water tends to pool on the GoPro’s lens in large, uneven patches that can really ruin the shot. The lens with the film fitted wasn’t always perfectly clear and even sometimes seems to encourage some scattered water drops to linger, but it was generally an improvement on the one without the film because the water ran off the lens more quickly.

Second, with the solid dousing, I also found it to work well. The results were pretty much the same as dunking. Here’s a side-by-side example. First, here’s the footage from the camera without the XClear lens protector.

And here’s the footage from the camera with the film.

The surprise came with the light, misty spray. There was a more marked difference in the results, but it wasn’t necessarily a clear improvement. The issue is that the film encourages beading, and with fine spray that creates many more, smaller droplets rather than a few larger ones. Overall, I’d probably consider it an improvement, but it’s by no means a slam dunk.

Here’s the version from the camera without the protective film.

And here’s the version with the film.

And, turning things around, here’s an example of what I mean. The camera on the right has the XClear film attached; the one on the left doesn’t.

There are other ways to help prevent water from beading:

So what’s the verdict? Are the XClear Hydrophobic Lens Protectors worth using?

I’ve found them to be a bit of a mixed bag. They do make a difference, but in some circumstances they just have a different result that may or may not be an improvement, depending on what you’re going for and your personal preferences.

But overall, I’ve concluded that yes, they are an improvement most of the time. With the smaller beading the films promote, I’m more likely to end up with more salvageable photos and videos. So I’ve now installed them the GoPros I use most often.

I didn’t find any noticeable effect when using it dry or completely submerged, so I didn’t find any way that it might interfere with standard filming in those conditions, meaning it’s safe to leave on all the time. The manufacturer says that they remain effective for 6 months. I haven’t had them on long enough yet to vouch for that. But they are easy to remove and don’t leave any residue behind.

So they’re not magic. They don’t completely eliminate the problem of water drops on the front of the lens. But in my experience, I have found them to be an improvement that made them worth using.

UPDATE: I’ve since stopped using them and no longer routinely install them on all my GoPros. I found that the lens protectors ended up cracking too easily, that they were too fragile for the way I use my GoPros. If you’re more careful than I am, you might get more mileage.

Whether this goes directly on the camera’s lens port or on a housing’s port depends on which camera and what setup you’re using. Cameras since the HERO5 have been waterproof without the need for a waterproof housing. In that case, you’d use it directly on the camera. But you can still use those cameras inside a dive housing, in which case you’d use the film on the housing portal. Same with the older models that required a waterproof housing (there’d obviously be no point putting it on the lens port of a camera that wasn’t waterproof.)

Water-based photographers have a number of tricks for trying to keep water droplets off the lens port. Everyone has their favorite method, and some methods are best suited to particular cameras and housings (eg. you would not want to put strong chemicals on an acrylic lens port, for instance). Here are some common approaches, in no particular order: