This small but fascinating book was put together to commemorate the central role Hasselblad cameras played in capturing the moon landing. 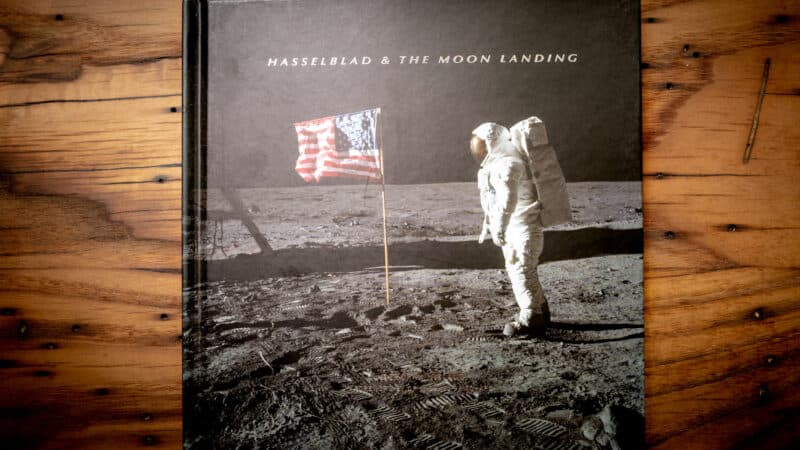 This is a review of Hasselblad & the Moon Landing, by Deborah Ireland.

This is a small but fascinating book. It’s a commemorative book published in 2019 for the 50th anniversary of the moon landing; a little smaller than would usually qualify as a coffee-table book, but that kind of idea.

The cameras from the Swedish camera manufacturer Hasselblad weren’t the only cameras used in NASA’s space program, but they are the most famous.1 And that’s because they were used to take some of the most iconic images of the space age. And, most especially, they were there to capture when Neil Armstrong and Buzz Aldrin landed on the Moon. 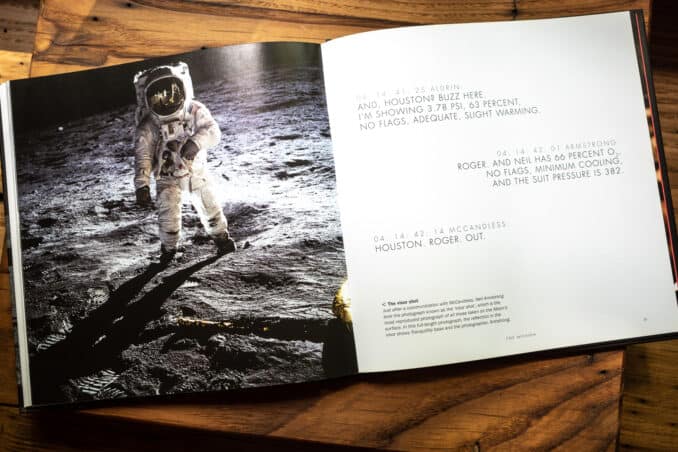 The lunar program coincided with Hasselblad’s transition from being a military tool to a professional camera system in the 1950s, and Hasselblads became part of the manned space flight program with the Mercury 8 / Sigma 7 mission in 1962, when astronaut Wally Shirra took with him a NASA-modified Hasselblad 500C 70mm camera with a Zeiss Planar 80mm ƒ/2.8 lens.(p.12) This became the core camera system for the next several missions through the Mercury and Gemini programs, with a few lenses being included later. Their photographs weren’t just for fun and PR—the cameras were being put to use to photography terrain and weather, becoming a kind of manned satellite photography. 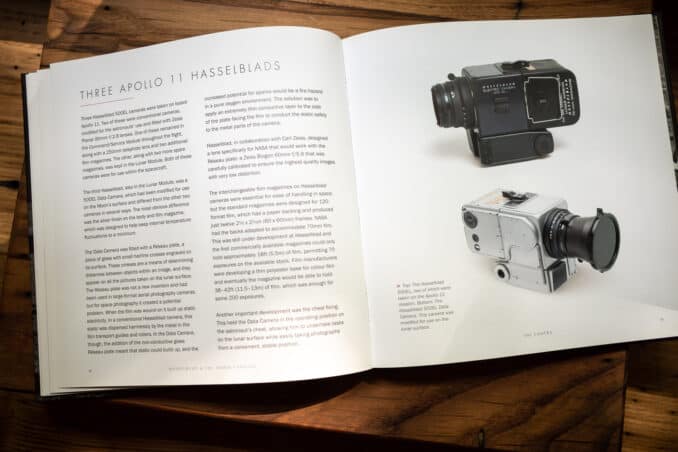 As they moved into the Apollo lunar program, it became clear that an off-the-shelf camera, even one as sophisticated as a Hasselblad, wasn’t going to cut it. So Hasselblad, Carl Zeiss, and NASA collaborated on a new camera that became the Hasselblad 500EL, often used with a Zeiss Planar 80mm ƒ/2.8 lens.

After the fire on Apollo 1 there were tighter safety requirements for all materials used in the space capsules. This included the camera, which would have to perform to rigorous standards. Zeiss, the lens manufacturer, ran tests to investigate how optics would perform in a vacuum. Hasselblad had to solve the problem of lubricating moving parts, particularly the shutter, as lubricants would boil in a vacuum and leave residue that might affect the mechanism or condense on the lens. Any component that could potentially cause a spark also had to be eliminated.(p.34)

Side note: If you happen to be in the Washington DC area, you can see one of the three Hasselblad 500EL cameras that flew on the Apollo 11 mission on display at the Smithsonian National Air and Space Museum’s Udvar-Hazy Center. It’s in the James S. McDonnell Space Hangar, in a glass exhibit case in front of the Space Shuttle Discovery. This is the camera that stayed with Michael Collins in the command module. The other two cameras that went down to the Moon’s surface were left there to save weight on the return trip.

Three Hasselblad 500ELs were on board for the Apollo 11 mission. One of the three was known as the Hasselblad 500EL Data Camera, which was specially modified for use on the lunar surface. It was fitted with a Réseau plate, which is a thin piece of glass with small hairline crosses etched into its surface. They’re a means of calculating distances between objects. It was this camera that was used for all the photographs on the lunar surface, which is why they all have those distinctive small crosses in the image.(pp.38-39)

As there was no viewfinder, it was very much a case of point and shoot.(p.34)

The astronauts would be busy when they were out walking on the lunar surface. There were experiments to set up and rocks and soil to collect. To keep their hands free, NASA developed a special chest mount for the camera to allow the astronauts to easily take photos and know where their camera was at all times (there was, after all, no way to turn around if they accidentally left it resting on a rock somewhere.) They also had a shot list, although some of the most iconic photos were impromptu shots, like the famous one taken by Neil Armstrong of Buzz Aldrin standing on the lunar surface with reflections of the landing module and Armstrong on his visor.(p.45). 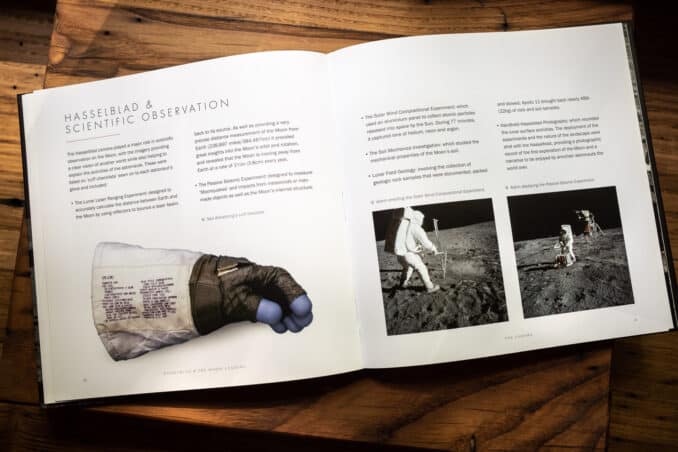 Today, there are two Hasselblad cameras on the Sea of Tranquility and a total of 12 Hasselblads on the Moon’s surface. To reduce weight on the return journey, any non-essential items were jettisoned, and, after stowing the film backs containing the exposed film, the camera body and lens of the silver Hasselblad 500EL Data Camera and the Hasselblad 500EL from the Lunar Module were left behind.(p.50)

The astronaut photographers captured 1407 photographs (857 on black and white film and 550 on color film).(p.15) Many were blurry or poorly framed, and there were accidental shots.(p.53). But some were stunning, and the image quality is exceptionally high. Because the cameras used 70mm film (specially modified from the 120 film that Hasselblads typically used), the photos were in a square format.

The first part of the book provides the background and information. The second part of the book showcases some of the beautiful images in full-page layouts. Each image is paired with excerpts from the running transcript of the mission, so you get snippets of the astronaut’s conversation as the photos were taken. A smaller caption provides further context for the image to help understand what it is we’re looking at.

As you would expect, the photos are beautiful. It includes some of the iconic photographs we’ve all seen, but also many that I hadn’t seen or noticed before. It’s just a shame the book isn’t larger so that the wonderful photographs could be larger (it’s an 8 x 8-inch book, with the largest photos around 6 1/4 x 6 1/4). 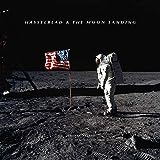 Author Deborah Ireland has spent 19 years working in the world of photography, having held the positions of assistant curator of the Royal Photographic Society’s archive and head of the AA World Travel picture library.

On 20 July 1969, as part of the Apollo 11 space program, Neil Armstrong and Buzz Aldrin became the first people ever to set foot on the Moon. Their iconic ‘small steps’ were captured forever by the camera the astronauts carried with them: the Hasselblad 500EL. The remarkable images taken with this camera provide an enduring record of one of humankind’s most extraordinary adventures: but the development of the camera involved a ‘great leap’ in technology that lasted almost as long as the space program itself.

The Hasselblad & The Moon Landing looks at the history of the Apollo 11 mission through the lens of the Hasselblad, while narrating the parallel tale of the challenge to create a camera that could work on the Moon. It considers the cameras used, and the photographs captured, during the Space Race between Russia and America; looks in detail at the experience of taking photographs on the Moon for the first time; and reflects on the processing, preserving and legacy of those images, and the part they play in the enduring conspiracy theories that claim the Moon Landing to have been a grand hoax.

The second half of the book presents a commemorative album of photographs taken in space using the Hasselblad 500EL. While the Apollo 11 astronauts left their three cameras behind on the Moon, where they remain to this day, they brought back film magazines containing 1,400 photographs. A selection of the finest of these is shown alongside the mission timeline and transcripts of the conversations between the astronauts and mission control at Houston, completing a beautiful commemorative guide to mark the 50th anniversary of one of humankind’s most remarkable achievements.

This book makes a good gift for photographers interested in the space program or camera technology. It’s a small book physically, and its information is concisely presented.

You can find Hasselblad & the Moon Landing at Amazon.