Lexar has come up with a new way to streamline the chore of downloading photos from your memory cards to your computer: the Lexar Professional Workflow system. 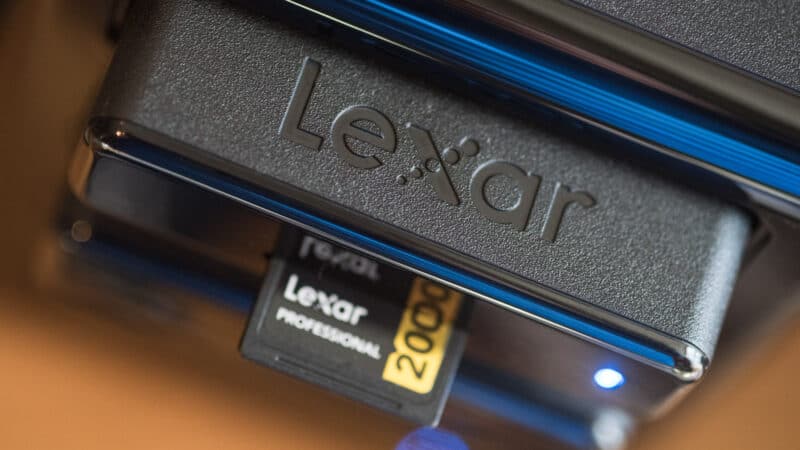 Downloading photos from your memory cards can be a bit of a chore. Before you can actually get cracking on editing and sharing your photos you have to go through the process of moving the photos from your memory card onto your computer. It can take too long with a slow card and/or reader. And if you’ve used multiple memory cards you’ve got to carefully keep track of which ones have been downloaded and which haven’t.

I’ve gone through a bunch of different card readers over the years. Lately, I’ve switched to the Lexar Professional Workflow system.

Lexar is best known for its memory cards, but they’ve also been responsible for some of the best memory card readers. By thinking outside the box, they’ve come up with a new approach that has a lot of appeal.

At its heart is a four-bay hub that connects to your computer and is powered by AC. By itself, the hub doesn’t do anything. But you can plug in up to four cartridge-style memory card readers that all take advantage of the same connection to the computer. There are currently available cartridges for SD, microSD, compactflash, CFAST 2.0, and XQD 2.0 memory cards.

Lexar Professional Workflow HR1 Four-Bay USB 3.0 Reader Hub LRWHR1RBNA
Check Price at Amazon
It means you can mix and match a variety of different card readers. If you only use compactflash cards, you can have four compactflash bays, if you like. If you want a combination of SD, microSD, compactflash, and XQD 2.0, you can do that. There’s also a cartridge with an SSD drive inside that you can use to back up your images. And not all slots have to be used, so you can build your system over time. Even better, the cartridges function as regular stand-alone card readers–that is, you can use them by themselves without the hub but just plugging in the USB 3.0 or Thunderbolt 2.0 cable directly into the back of it.

It also means that so long as Lexar keeps up with new generations of memory card technology–and they certainly have the incentive to–they can release new cartridges for new technologies and cards.

Downloading from Multiple Memory Cards at Once

Many other card readers take multiple types of memory cards, of course. But a big advantage of the Lexar Professional Workflow system is that the readers can be used concurrently, which isn’t possible with most other readers (they do exist, but there aren’t many). So if you’re using software like Lightroom, Photo Mechanic or Image Ingester that can read from more than one card in one step.

I’ve found the card readers in the Lexar Professional Workflow series to be zippy–close to the fastest I’ve tested. Because there are no moving parts, it’s silent. And while the readers can get a little warm while they’re working hard, there’s plenty of air around them to provide natural cooking.

I haven’t run into any real issues in my use, but multiple users have reported issues with the XQD 2.0 reader. Some of those issues are related to trying to use older first-generation XQD cards in the XQD 2.0 reader (they’re not compatible), but not every report can be explained by that.

The microSD reader comes with three slots. The first time I tried to use it, the first slot worked but the others didn’t register the card. It was easily fixed by simply removing the reader from the hub and reinserting it.

There are two versions of the hub. One uses USB 3.0, while the other uses both USB 3.0 and Thunderbolt 2. The Thunderbolt 2 version has the potential to be significantly faster if your computer setup can support the faster speeds. In theory, USB 3.0 can transfer data at up to 5gbps while Thunderbolt 2 can transfer at up to 20gbps. In practice, there are all sorts of reasons you probably won’t reach those theoretical maximums–for starters, even the fastest CFAST 2.0 and XQD 2.0 cards haven’t reached the 5gbps mark yet.

For now, the version of the hub with Thunderbolt 2 is significantly more expensive, and the only reader available for now that takes advantage of the Thunderbolt 2 connection is the one for CFAST 2.0 cards. If you use any of the other cartridges in the Thunderbolt 2 hub you’ll need to use them with the USB 3.0 connection.

Th Workflow system is sold in multiple configurations. You can get the hub only and then get the cartridges you want separately, or you can buy bundles of various configurations.

It works with both Mac (OSX 10.6+) and Windows (8/7+) without the need to install drivers or other software in most cases.

If you’re using Windows 7 with the HR2 and CR2 combination, there’s a firmware update that you might need.

At the time of writing, these are the various components of the Lexar Professional Workflow system that are currently available:

I’m sold. It’s been working very well for me, and despite the extra desk real estate it takes up, I love having quick access to various different top-notch card readers and being able to download from multiple readers at once. I don’t use the card readers as standalone devices–I have other, more compact readers for that–but it’s nice to have the option. And I like the idea that I can build the system over time as my cameras and needs change.

I would love to also have a USB 3.0 hub or at least connection built in–or as a cartridge–so I can connect a portable memory card backup device when I get back from a shoot or trip and consolidate my photo downloading into even fewer steps, but that’s probably a fairly niche request.

They’re sold in multiple configurations, so it’s worth checking that the bundle you’re ordering includes the combination of readers and hub you want.

And it’s worth making sure you’re getting the latest generation. For instance, Lexar has produced two generations of the HR1 hub so far, both just called the HR1. The first generation has some limitations on how many microSD readers you can use in it–a limitation that the second generation doesn’t have. For the HR1, the model number of the discontinued first-generation version is LRWHR1TBNA. The newer version is the LRWHR1RBNA.