HDR is traditionally all about the drama. But it doesn’t have to be all about overly saturated and uber dramatic images. The tone-mapping tools built into apps like Photomatix and Aurora HDR 2019 can be useful for making otherwise blah photos more interesting and perhaps salvaging them as keepers. 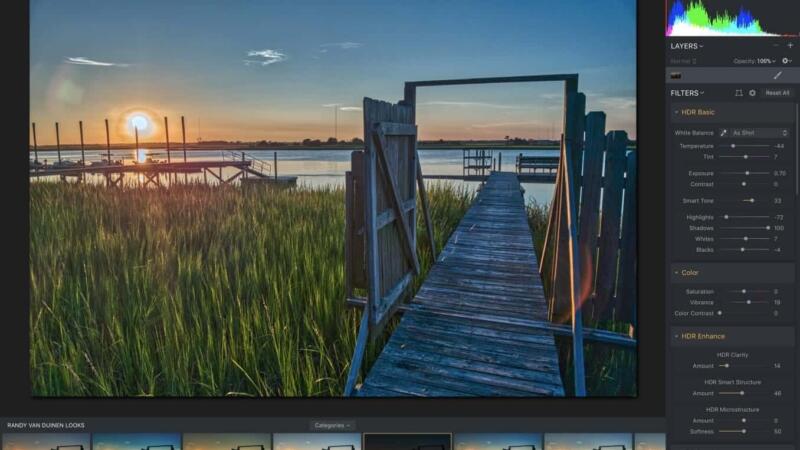 The folks at Skylum have just announced their latest version of their Aurora HDR software. They were kind enough to send me a pre-release version to try out.

There’s quite a lot new in it, but rather than provide a long laundry list of the new and improved features, I thought I’d put it to a simple but practical test. HDR, when done well, definitely has a time and place, and I do use it for architectural and some location shoots for clients when I have the opportunity to do multiple bracketed exposures. But the kind of overly saturated and overly contrasty look that some HDR ends up being is not really my thing. Going back to my black and white film days, I’ve never been afraid of using shadows and highlights, and I don’t usually go to great lengths to milk as much detail out of shadows and highlights as possible.

But HDR apps like Aurora and Photomatix and Lightroom’s built-in HDR feature don’t have to lead to garish, overly saturated results. They can also be used to salvage photos that might otherwise fall in the reject file. That’s especially true if you’re shooting RAW, because there’s more image data there for the processor to work with. Traditional or true HDR involves shooting multiple images with bracketed exposures, but most HDR software, Aurora and Photomatix included, can do a pseudo-HDR out of a single image by taking that image and then tone mapping it.

So rather than using tone mapping to amp up the drama, I wanted to see if it could salvage something usable (or at least, more interesting) from photos that would otherwise end up in the reject pile. And while there’s an awful lot of control and power built into the being able to tweak the individual settings to your heart’s content, I was interested in trying to do it quickly, with one or two clicks, by using the built-in presets. And to put it to the test even further, I decided to use some shots I took recently while testing out the Sony RX0 miniature camera. Recovering shadow and highlight detail from the files produced by high-end cameras like the Nikon D850 or the Sony Alpha cameras has become old hat. But I’d be more impressed if it can salvage photos taken with this camera; the RX0 has an impressive sensor for the size of the camera, but it’s nothing like a top-shelf full-frame or even APS-C camera. All of these were taken in Sony’s RAW format (.arw).

I’m using Aurora as a Lightroom plugin, but you can also use it as a standalone app or as a plugin for Photoshop, Photoshop Elements, or Apple Aperture. For these examples, I’m using the option to open the original RAW file directly, so there are no Lightroom edits muddling things. And, finally, I’m using the built-in presets at their default settings. This isn’t really the way they’re supposed to be used, and it’s barely scratching the skin of what is possible when you start tweaking the individual settings–the presets, or “looks,” are best used as starting points. But I wanted to see what Aurora could do as a kind of one-click option; in real-world use, I’d be tweaking these further.

Here’s the original of the first image I’m working with. It was shot of the setting sun over the marshy inland waterway at the Isle of Palms, near Charleston, South Carolina. I was testing out the RX0’s exposure settings, and in this case I’d switched to manual mode and was underexposing. It obviously went too far in this one, and there’s really not much to stop me from rejecting it. As it happens, there are more issues than just underexposure here–it also turns out that the large glass panel on the front of the RX0 is a magnet for lens flare, but I’m going to ignore that for these purposes.

Aurora comes with a bunch of presets, or “Looks,” as they’re called here. Starting with the most basic, in the Essentials category, the Natural look gets things rolling. It’s an immediate improvement, although two issues leap out: it’s still too dark overall for my tastes, and there are some overly dramatic halos around the sun. But, overall, it’s a step in the right direction right off the bat.

In the same Essentials collection, there’s also a Fix Dark option. And it does that quite well, albeit with more saturation than I’d prefer (again, I’m using the presets out of the box, and under normal circumstances, it would be natural to tweak the individual settings).

The Essentials collection is just the most basic collection that comes with the software. There are other collections that come with it, and it’s endlessly extendible with extra looks that you can download or buy from elsewhere or simply make your own.

I’m not going to go through every look here, but a nice thing is that when you switch to a different category, the filmstrip at the bottom automatically–and virtually instantaneously–updates with new previews based on the various looks in that category. So you can very quickly get a sense of what might work and what won’t.

In this case, this is how the High Detail look in the Randy van Duinen collection looks. It’s a bit strong for me, but it might work well on something like Instagram, where there’s a higher tolerance for filters and viewed on a smaller screen.

And the Shadow Fill look in the same collection results in a more natural but still improved result.

Switching to the Trey Ratcliff collection, the “Giddy Up Cowgirl” look actually has a nice result that’s flatter and more desaturated but works quite well on this shot.

All of these still have ugly halos around the sun, which is something that I’d try to fix with some local adjustments, but as far as quick improvements go right of the box, I’m quite impressed.

For the next image, I’m going to use this one of the tail end of the Space Shuttle Discovery at the Smithsonian’s National Air and Space Museum. In this one, the exposure is pretty good. The colors and lighting are quite muted, but there’s a lot of potential detail in there in both the subject and the background. Overall, it’s a bit of a dull shot, and one that I’ve made more interesting in the past with some splashes of color from flash gels.

The complication is that this shot was taken at ISO 6400, and while the results are better than many other cameras of this size at that ISO, there’s still some very noticeable ISO noise that the HDR software can easily exaggerate.

This is using the HDR Look 2 preset in the Essentials category. It amps up the drama with extra contrast and saturation, but works quite well for this image.

This is the “Smooth, But Crunchy” preset in the Artistic collection. It adds a vignette that helps steer the eye to the middle.

There aren’t too many other presets that added much improvement out of the box. Some that amped up the contrast create real problems with the image noise. But it’s probably not surprising–this is an atypical image to be applying tone mapping to, and it’s an example where the results of using Lightroom’s standard develop module tools, with some clarity slider added, would probably get better results.

For the final image, I’m going to use this action shot from some boogie boarding on a sunny day. The camera’s automatic exposure isn’t bad, as such, but the face is very dark in shadows. And there’s a lot of potential detail in the white, foamy area of the breaking wave. The highlights and shadows sliders in Lightroom would also be a good place to start for this, but once again I’d like to see what Aurora can do without any outside help.

The Fix Dark preset in the Essentials category is an immediate improvement right off the blocks. It’s still not quite to my taste–it’s even now still a bit dark, and the tone mapping of the mids is a bit aggressive for my tastes, but those are easily tweaked and it’s definitely a step in the right direction toward a more usable photo.

Aggressive tone mapping can do some pretty hideous things to people, but the Big Glow preset in the Artistic collection works quite well here by going in the opposite direction and softening the details.

The Shadow Fill preset in the Randy van Duinen collection also works reasonably well, although it has applied a green cast that I’d fix before saving.

A Note on Batch Processing with Aurora

Having a one- or two-click option for quickly improving images opens the possibility of batch processing multiple images. But there is a bit of a limitation, in this case. If you send multiple images from Lightroom to Aurora at once, it will assume that it’s a conventional HDR series of bracketed images and try to merge them into a single image. So if you’re using Aurora as a Lightroom plugin, you’ll need to send each shot (whether a single image file or a series of bracketed exposures) separately.

Aurora can batch process, but to do that you’ll need to open it as a standalone app. Then, when you go to intro splash page, you’ll see an option for Batch Processing. When you click on that, you’ll have the option to open either a set of bracketed exposures or multiple single images.

For these examples, I’ve been using the built-in presets with their settings out of the box. Under normal conditions, I’d be tinkering with the settings for each of these to improve the results more. But it’s interesting to see how even just using the presets as-in can get you quickly to a much better starting point.

And a big part of my point here is that HDR software can be useful beyond making overly saturated, garish images. Their tone-mapping features can also be handy for recovering poorly exposed images, and maybe even making them more interesting, potentially tipping a photo over the edge from the immediate reject pile to the keeper pile. It’s not going to work for every picture and every taste, but it’s certainly an interesting option to have on hand.

Aurora HDR 2019 can be used as a standalone app (Mac and Windows) or as a plugin for Adobe Lightroom, Photoshop, Photoshop Elements, and Apple Aperture.

It's set to be released on October 4, 2018, but in the meantime you can pre-order to take advantage of special pre-order pricing and a bonus bundle. You can find further details here.