Adding a Grid Overlay to the Loupe View

The grid loupe overlay is pretty self-explanatory and simple to use, but you do have some control over its appearance. 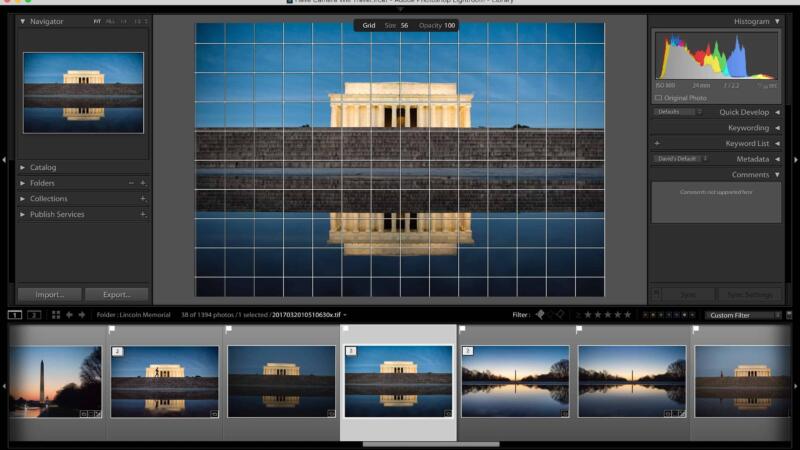 There are several ways to add visual overlays in Lightroom’s loupe view (when there’s a single image in the window). I’ve previously written about the guides overlay, the layout image overlay, as well as the overlays when cropping images.

The grid overlay is pretty self-explanatory: it gives you a square grid over the photo. This is for visual reference only–it’s not actually embedded in the image itself, and it won’t show up if you export the image or send it to the print or book modules.

It’s simple to use, but there’s also more to it than just on or off. You have some control over how it works.

You can use the layout image overlays in both the Library and Develop modules, but they’re set independently. So if you apply it in the Library module, it’s not automatically visible in the Develop module as well.

How to Add and Customize the Grid Overlay

To enable the grid overlay, go to View > Loupe Overlay > Grid. You’ll also need to make sure that the “Show” option just above it is checked (this is a way you can turn multiple overlays on or off at the same time).

You then have some control over its appearance.

Firstly, you can change the size of the grid. They’re always squares–you can’t change it to rectangles, for instance–but you can control the scale.

To do that, once the grid is visible, press CMD (Mac) or CTRL (Windows) and move your mouse cursor up to the number beside “Size” in the small popup window that appears at the top. Then click and drag left to make smaller or right to make larger.

You can also control the opacity the same way. Again, press CMD (Mac) or CTRL (Windows) and draft the number next to “Opacity.”

Something to note is that all three kinds of loupe overlay can be used together, so there’s nothing stopping you from using a grid, the guides, and the image overlay all at the same time.

One of three loupe overlay modes, the grid overlay provides a basic square grid that is useful when you need a reference for horizontal or vertical lines in the image.