How to Quickly Resize Images with a Mac Quick Action

Here’s a quick guide to creating an Automator service (quick action) so that you can quickly resize image files with a simple right-click. 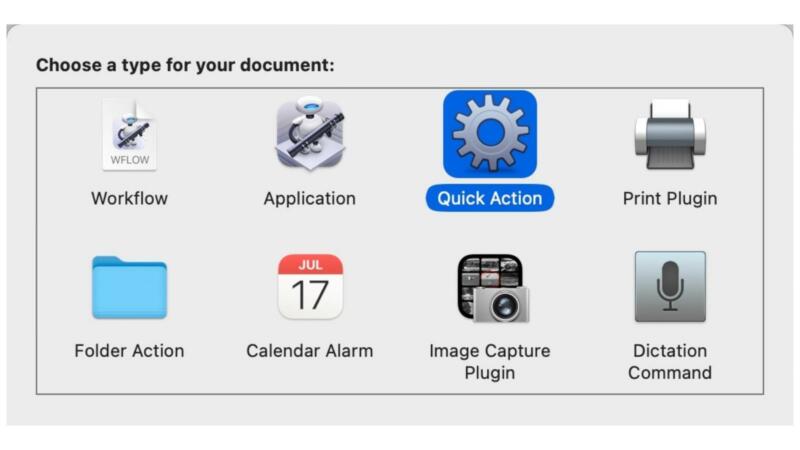 There are a bunch of different ways to resize images on Mac. Any image editing app worth its salt will have a resize function as one of its most basic operations. There are online services, where you can upload images, have the online service resize them, and then save them again.

If you’re using a Mac, there’s another option that can be extremely quick and convenient. It takes just a few minutes to set up the first time, but after that, it’s just a right-click away. It’s free, and it doesn’t involve installing any apps or software–it’s already baked into macOS.

It’s also very simple, which makes it easy and quick to use, but it also means you only have limited control over the output. If you need more sophisticated and granular controls, another option will work better (the free app XnConvert might be a good place to start). But if you consistently find yourself downsizing images to specific sizes for email or social media, for example, this can be an extremely effective option.

It uses Mac’s built-in Automator app to create a Quick Action (or what used to be called context menu services) so that you can right-click on the file or files and resize them.

When it asks you for the type of document, choose Quick Action. (In older versions of Mac OSX, it was called Service.)

Then hit the Choose button.

It will have added an initial section to the workflow area at the right. For the top option next to “Workflow receives current”, select the “image files” option. Leave the rest at their defaults (you can customize the image and color fields if you like, but there’s no need to).

From the Library in the left column, click on Photos to narrow the available actions. In the list of actions (second from left), scroll down and choose “Scale Images.” 1

Then right-click and go to Services and choose from the list.

It works on one image file or multiple files. If for some reason you’re mixing image files amongst other files in the same folder, it is possible to add a filter earlier in the workflow so that it only applies to image files. Explore the Filter Finder Items action under Files & Folders in the actions Library panel (far left).

You can also apply keyboard shortcuts to your Quick Actions. To do that, go to:

Then, find the service on the list and click on it. You’ll see a small “Shortcut” button appear to the right of the name. When you click on the Shortcut button, you’ll get a field where you can just press the keyboard combination you want to use for it.

Just be sure to avoid other global shortcut combinations–there’s no warning message if you step on an existing shortcut’s toes–it just won’t work as expected.

When you run this action, it’s going to replace and overwrite the existing files. So make sure you’re working on disposable copies, not the originals.

Automator is baked into macOS, so there’s no need to install anything and buy anything.

The app you’ve just created is available immediately. There’s no need to restart the computer or Finder.

If you choose the pixel dimension option, it refers to the longest side, whether that’s in landscape (horizontal) or portrait (vertical) orientation.

If you run this on images that are smaller than your output dimensions, it will resize larger. But it won’t magically restore detail that was already lost when making the smaller image.

While I’ve only outlined a very basic Quick Action here, it’s quite possible to expand on this workflow and add other actions and operations into the workflow sequence. For instance, you could combine it with converting the image type or some other manipulation or action that’s available in Automator.

What is macOS Automator?

Automator is a tool that’s baked right into macOS. It doesn’t receive a lot of attention, but it’s really, really handy to have. You can find it under:

Basically, automaton gives you visual tools in the form of building blocks to build workflows. So you can accomplish a bunch of useful tasks without writing any code (although you can add Applescript code, if you need something more customized).

Even better, quite a few Mac apps add actions and tools to Automator that extend the power and functionality of Automator. This usually happens automatically in the background when you install the app. An example is Photoshop–it will add a bunch of new actions that are useful for tweaking and manipulating images.

Even better, some Mac apps add actions and tools to Automator that extend the power and functionality of Automator. This usually happens automatically in the background when you install the app. Sadly, an excellent collection of Automator tools to interact with Photoshop that was put out by Ben Long no longer works with current versions of macOS (although Photoshop has its own separate toolkit for creating Photoshop actions which can be incredibly powerful but work differently from Automator actions).

Where Automator excels is in saving time and adding convenience with time-consuming, repetitive tasks such as this. But it can also be surprisingly powerful if you want it to be.

How to Quickly Resize Images with a Mac Quick Action