The MOVO MTP-10 is one of several devices for adding rotation and panning to timelapse captures. It’s a significant step up in both features and price than some alternatives. Here’s my hands-on review. 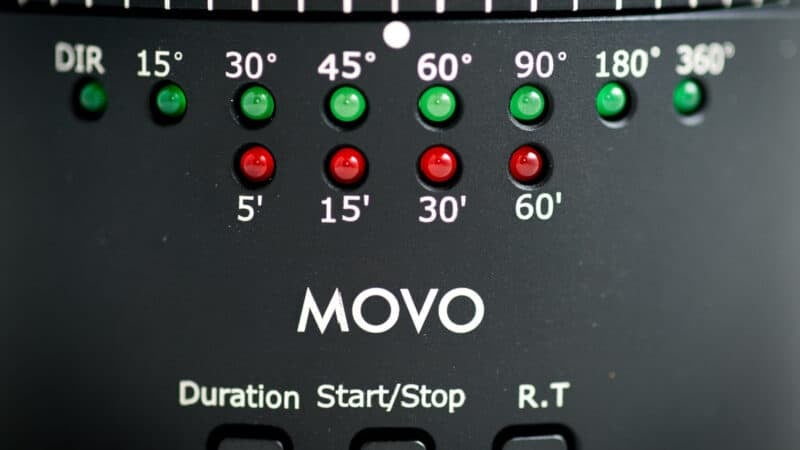 Since I originally posted this, a new model has come out–the MOBO MPT-11. It’s very similar, and nearly everything below applies to the newer model as well. You can find the new version here.

Adding movement to a timelapse can help spice it up. While it’s often possible to fake it in a kinda-sorta way in post-production, it’s not a substitute for incorporating the movement when shooting.

Probably the simplest movement to add is panning, or rotation. Whether it’s a dramatic 360-degree sweep or a much more subtle movement, the result of a little movement can often be much more visually interesting than a fixed, static shot.

There are a number of devices that can be used to add rotation as you’re shooting, and I’ve reviewed some before. Some, like the Camalapse 4 are essentially glorified mechanical kitchen timers. They’re inexpensive and simple. At the other end of the spectrum are much more sophisticated (and much more expensive) devices like the Emotimo TB3 or the Syrp Genie.

Here I’m focusing on one that falls somewhere in between: the MOVO MTP-10. 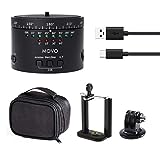 The formal name of this product is a bit odd. It’s not what I think of when I hear “ball head,” which is usually a tripod head that can roll in three dimensions and be locked in place. But then, this class of device doesn’t really have a universally recognized name. They’re essentially rotating bases for timelapse panning.

There are cheaper devices that do the same thing, but they’re entirely mechanical and amount to fancy kitchen timers. The MOVO is the next step up in both features and price.

For one thing, this one is electronic. It has an internal rechargeable battery. For another, you have a lot more the rotation speed and direction. With the simpler models like the Camalapse 4, you twist and go. With the MOVO you can set the direction of rotation, the amount of rotation, and the speed of rotation. 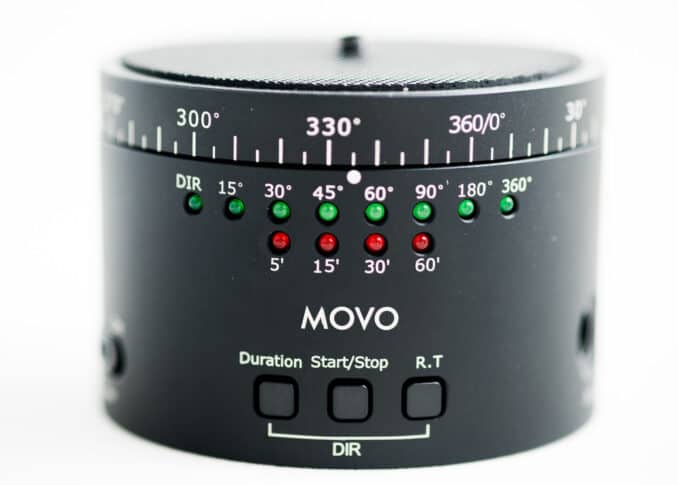 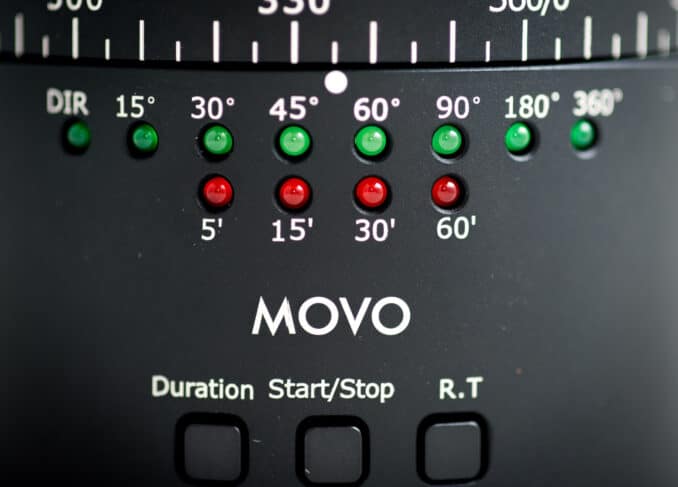 There’s a standard is a 1/4″-20 tripod mount thread underneath, so you can put it on a tripod or any other mount that uses that standard kind of bolt. And on top is a standard 1/4″-20 camera mount. So it’s compatible with most DSLRs and mirrorless cameras on the market. If you want to use it with a GoPro you can add a GoPro tripod adapter. You can of course also use it with a smartphone with a smartphone tripod adapter.

The MOVO comes with a small AC power adapter that feeds DC 12V into the device’s built-in rechargeable battery. Unfortunately, it doesn’t use the USB charging standard, so you’ll need to take the charger with you if you’re traveling.

The battery takes about 4 hours to charge from fully depleted. When fully charged, the battery should last for roughly 6 hours of use with a 1KG camera payload or about 50 hours in standby. Because it takes more energy to move a heavier weight, using a heavier camera–or using it less than perfectly balanced–will deplete the battery more quickly.

You can also power it with AC using the adapter that’s included.

The indicators for the distance, direction, and duration of rotation are rows of red and green LEDs. It seems a rather quaint arrangement in these days when small LCD screens are so ubiquitous, but it works well enough.

Direction. One nice feature about the MOVO is that you can change the direction of rotation–it can do both clockwise and counterclockwise rotation. That means no need to hack it like having to turn it upside down. The direction of rotation is set by the Duration and R.T. buttons today. The indicator could be clearer and more logical, but it’s the light under the DIR label that’s either on or off. Off is counterclockwise, while on is clockwise.

Duration/Speed. You also need to set the duration of the rotation, with the options being 5, 15, 30, 30, or 60 minutes. In combination with the amount of rotation setting, this is essentially controlling the speed of rotation. Slower rotations are likely to result in smoother panning, but even at its fastest speed I found the results pretty good, with only minor jumpiness.

The rotation uses an internal step motor that revolves in tiny increments, or steps. To the naked eye, the steps are basically imperceptible, but there are situations where you can end up with some jerkiness between frames. That’s because, like all the simpler panning devices, the camera and the rotation device are operating independently. So the shutter and the steps can become slightly misaligned, and if you’re using a very short interval such as 0.5 seconds, you can end up with different numbers of shots for each individual increment. You can see the result of that in the clip above with the leaf blowers.

The best way to overcome this is to use slow panning. To really overcome it, you really need the shutter and rotation to be coordinated in a step-shoot-step pattern, but that feature is only available in more expensive models like the Syrp Genie Mini, Syrp Genie, or the Emotimo TB3.

The MOVO MTP-10 is a bit bigger than some of the alternatives, but it also feels solid, with an aluminum case. 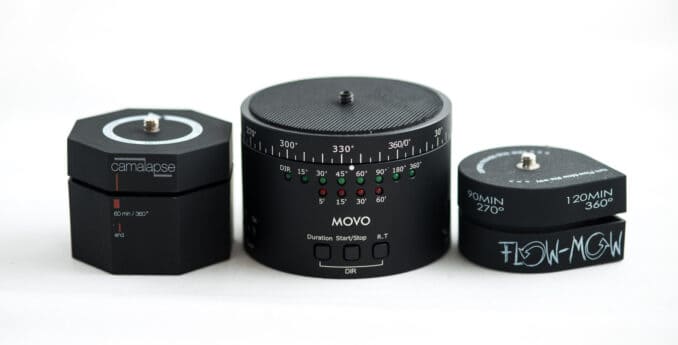 The maximum recommended weight to put on it is about 3.3 lbs (1.5KG), which is less than the 5 lbs that the Camalapse folks claim their device can handle. If you’re using it an angle other than perfectly flat, that maximum weight recommendation drops down. Ideally, you’d keep the MOVO flat on the tripod and add a small ballhead on top.

Finally, one of the real positives of this device is that it’s so quiet. The mechanical versions have the loud tick-tock of an old-fashioned kitchen timer. But the MOVO is practically silent.

Being able to charge it via USB would be nice. We already have enough power supplies to carry around without adding yet another one.

There’s no way to reset the rotation dial to zero. So it’ll start from whatever point you last ended. That doesn’t affect the actual rotation, but it’s not especially helpful when you’re trying to gauge progress while it’s working.

And it would be nice to have another progress light on the back of the base. The progress light shows whether it’s still rotating or not. But if your camera is pointed towards the front of the base, it’s not easy to see whether the light’s still flashing without popping up in the frame and ruining the shot.

The MOVO MTP-10 and the camera shutter act independently, so you can put pretty much any small camera on top for the ride. The maximum load capacity when fully horizontal is about 3.3 lbs. That easily accommodates GoPros, smartphones, and most mirrorless cameras and smaller DSLR/lens combinations.

It comes with the main device, a DC power adapter, and a rather concise instruction manual.

Overall, I found the MOVO to produce the smoothest panning of any of the sub-$100 panning devices. Part of that is because of its smooth increments. The other is that it’s just more solidly built than the cheaper alternatives, so there’s no give between the rotation plate and the base that can create wobble. While it means yet another thing to keep charged, the extra features the electronic motor and controls provide compared to its less expensive mechanical competitors more than outweigh that minor inconvenience.

I bought mine at Amazon. The new model is the MOBO MTP-11.