The answers to some common questions I’ve gotten from readers about the Nikon D3500 DSLR camera. 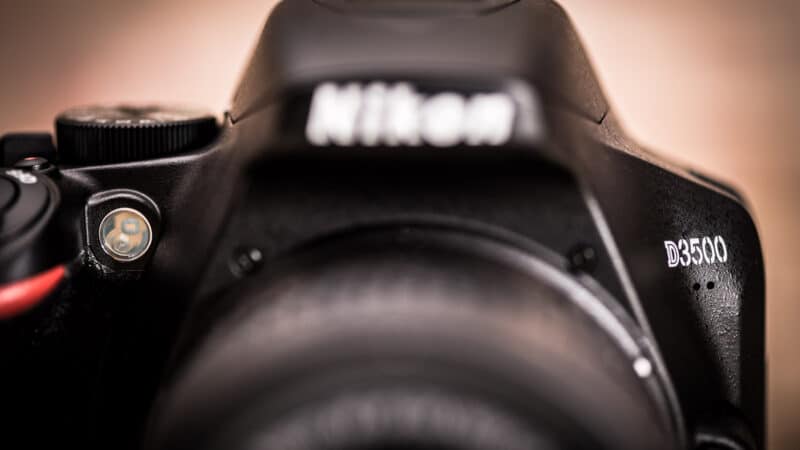 Here are the answers to various questions that have come up regarding the Nikon D3500 DSLR.

I’ve tried to include some succinct answers below. In several cases, I’ve linked to more detailed explanations and how-to guides. It’s designed as a rolling Q&A page, so by all means ask questions in the comments and I’ll do my best to expand it.

If you’ve used the Nikon D3400 before, you’ll notice that the video shooting options are practically identical. And Nikon refers to video as “movies,” which is what you’ll find used in all the menu settings and features.

How to Record Video with the Nikon D3500

Starting video recording on the Nikon D3500 isn’t as intuitive as it could be, and it’s slightly different to how it worked on the D3400. The main difference is that the Lv (Live View) button that was on the back of the D3400 has been replaced with a Lv lever on the D3500.

And that’s important, because to start video recording, you first have to turn on the Live View display.

So, first, choose the recording mode you want to use from the top dial. The simplest is to start with P.

Then pull the Lv lever towards the back of the camera to enable the back screen’s live view.

Another thing to know is that there’s a dedicate video shutter button. Some cameras have a separate video shooting mode on the shooting mode dial. The D3500 doesn’t have that. Instead, it uses a separate recording start/stop button (that is, you don’t use the normal shutter). It’s the small button with the red dot on top of the camera, right next to the main shutter.

If you’re using a compatible autofocus lens, you can still use autofocus while recording. For that, use the regular main shutter button (not the one with the red dot–that’s only for starting and stopping the recording).

This table shows the bitrates the D3500 produces at various resolution/framerate combinations based on my tests. These are all in Mbps (Mb/s).

The D3500 uses variable bitrate encoding, which tries to match the compression to the detail in the scene. So you can get some variation either way depending on the scene you’re shooting. And these bitrates are for the overall bitrate, including both the video and audio streams.

What Kind of Video Files Does the D3500 Save?

The video files from the Nikon D3500 are saved as QuickTime MPEG-4 files. The files use the .MOV file extension.

It uses AVC encoding for the video stream and PCM for the audio.

What are the Video Recording Options on the Nikon D3500?

The D3500’s emphasis is on still photos, and its options for shooting video are quite limited.

You can find the video settings on the main menu under the Camera icon tab. Scroll down to the end to Movie Settings, and then press right.

Aside from the resolution and framerate, the other options you can set are:

The Nikon D3500 has a maximum recording time of 29 minutes and 59 seconds, but that’s not available in all the resolution/framerate/quality combinations. Whatever shooting mode you’re using, the maximum file size is 4GB. 2

Here’s a detailed breakdown of the maximum video lengths on the D3500 by the resolution/framerate/quality combinations.

Does the Nikon D3500 Have a Built-in Microphone?

Yes. The Nikon D3500’s built-in microphone is on the front panel. It’s the three holes immediately below the “D3500” badge on the front.

Yes. It uses an HC-E1 HDMI cable with a type C connector.

If the device you’re connecting to has HDMI-CEC, you can set the option to use Device Control.

It is possible to use as the Nikon D3500 as a webcam for Zoom or Skype meetings or for real-time video capture to a computer for recording how-to video tutorials. But there are some caveats to that. One is that the Live View feature, which is a requirement for making this work, maxes out at 30 minutes on the D3500. That means that you’ll need to tap a button every 30 minutes to keep the video feed active.

And it’s not quite as simple as just plugging your camera in with a USB cable. You’ll need an HDMI video capture device (plus HDMI cable) between your camera and the computer.

I’ve put together a detailed guide to connecting a Nikon D3500 as a webcam separately.

You can enable RAW by going to Shooting Menu (camera icon) > Image Quality. There you can choose to shoot RAW-only, RAW + JPG (ie. it saves both types simultaneously), or a few different quality settings of JPG-only.

The RAW files give you more flexibility in processing and potentially offer significantly higher image quality, especially if you’re editing. The catch is that they need to be processed in something like Lightroom or an alternative before they can be shared.

When you’re shooting RAW on the D3500, you have available a maximum shooting rate of 5 frames per second continuous shooting for up to 24 RAW files.

Is the Nikon D3500 DSLR Weather-Sealed or Waterproof?

The Nikon D3500 is not weather-sealed or waterproof or otherwise ruggedized. So you’ll want to exercise caution in damp conditions. It’s not until you step up to Nikon’s D7### series that you can find weather-sealed models.

You can find dedicated underwater dive housings for the D3500, but as usual with dive housings, they’re expensive and will wind up costing far more than your camera.

A much more affordable option is a waterproof soft case from DiCAPac. They’re designed for damp conditions and shallow water. I’ve had good results from them, but there’s always some risk when taking a camera like the D3500 near the water.

Can You Control the Nikon D3500 with WiFi?

The Nikon D3500 doesn’t have WiFi, but it does have Bluetooth. So you can connect to the camera to do some operations, but you don’t have the full range of power that a WiFi connection affords. For instance, you can’t control the camera’s operation wirelessly.

To connect to the D3500 via Bluetooth, use Nikon’s SnapBridge app. It uses low-energy Bluetooth, which means that images can be transferred to your phone without killing battery life too much.

The Nikon D3500 has an ISO range from ISO 100 to ISO 25600. You can set the ISO manually or use the built-in Auto ISO feature. I have a detailed guide on the D3500’s ISO features separately.

What Aspect Ratios Does the Nikon D3500 Have?

The Nikon D3500 shoots photos with a native aspect ratio of 3:2. You can’t change the aspect ratio while shooting, but you can edit the files afterwards in the camera (or on your computer or phone).

What Battery Does the Nikon D3500 Use?

The model number of the battery for the Nikon D3500 is EN-EL14a.

You can get Nikon-branded replacements or use aftermarket versions from other manufacturers. I have detailed post on Nikon D3500 batteries here.

Which Memory Cards are Best for the Nikon D3500?

The D3500 is not especially demanding of the memory card. It takes SDXC and SDHC cards, and you can use cards from 16GB up through 512GB.

I have posted some detailed recommendations on memory cards for the D3500 here.

Can You Imprint Time and Date Stamp on Photos in the Nikon D3500?

Yes. I’ve put together a guide on date stamping with the D3500 here.

The D3400 had a button on the back, but that button has gone on the D3500. In its place is a small lever at the base of the shooting mode dial on the top of the camera. You can find more details here.

Can You Increase the Live View Auto-Off Setting?

By default, the Live View will turn off after 10 minutes. You can change that, up to a maximum of 30 minutes, under: Settings > Auto Off Timers > Custom > Live View

I’ve included some screenshots in a guide here.

The Nikon D3500 doesn’t have any time lapse features built-in. Nor does it have a port for connecting accessories such as intervalometers. So the usual selection of intervalometers for Nikon cameras won’t work.

But I can confirm that you can shoot time lapse with a Nikon D3500 using the qDslrDashboard app to control the camera. The catch is that it’s limited to a physical USB connection to a computer because the D3500 doesn’t have wifi capabilities. So it’s a rather limited solution, but it does work.

I’ve put together a more detailed post on this: Nikon D3500 Intervalometer: How to Shoot Timelapse with a Nikon D3500

What Lens Mount Does the Nikon D3500 Use?

You can find details on compatible CPU lenses for the Nikon D3500 here.

How Many Megapixels is the Nikon D3500?

What is the Fastest Shutter Speed on the Nikon D3500?

Does the Nikon D3500 Have Rapid Burst Mode Photo Shooting?

The Nikon D3500 can shoot still images in burst modes of up to 5 frames per second at 24.2 megapixels.

What Aspect Ratio are the Images on the Nikon D3500?

No, the Nikon D3500 does not have built-in GPS functionality.

Is the Nikon D3500 a Mirrorless Camera?

No, the Nikon D3500 is not a mirrorless camera. It is a DSLR (digital single lens reflex).

When was the Nikon D3500 Released?