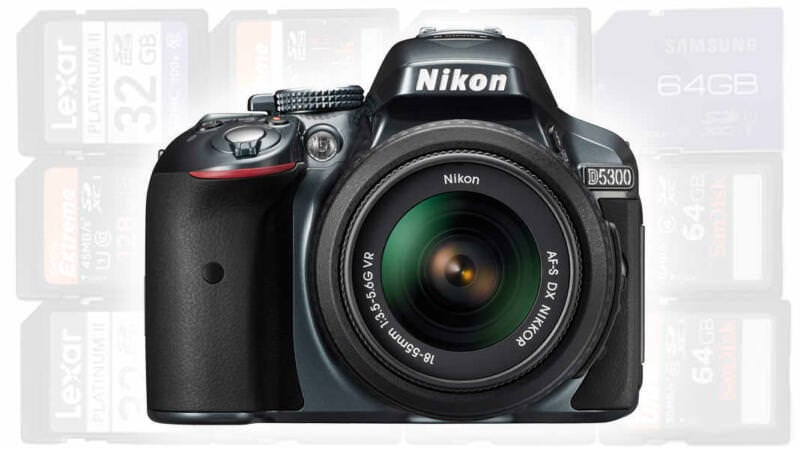 The Nikon D5300 DSLR has impressive video and burst photo capabilities. But making the most of them requires having a memory card that can keep up. If you get one that’s too slow for the camera, you can run into trouble with freezing up and recording stopping unexpectedly.

If you’d like to get right down to business, here are some quick recommendations for good memory cards for the Nikon D5300. You can find more detailed explanations and more options below.

Any of these SD cards offers a good combination of compatibility with the D5300 and cost-effectiveness, are quite readily available at major retailers, and are produced by reliable manufacturers. So any of these makes for a good choice.

Nikon issues its own guidelines for officially approved memory cards for the Nikon D5300, but it’s pretty hard to make sense of. Buried on page 238 in the technical notes section of the Nikon D5300 reference manual, it looks like this.

I don’t know about you, but I don’t find that especially helpful. So I’ve taken those official recommendations from Nikon and translated them into practical recommendations below that cut through all the confusing jargon that memory card manufacturers use in their marketing.

In general, the Nikon D5300 will accept SD, SDHC, and SDXC cards.

All of those types look exactly the same–the difference is in the amount of memory. 1 SD refers to cards up to 2GB in size. Now that memory card prices have come down and you can buy very good 32GB cards for $15, there’s no good reason to be buying a 2GB card if your camera supports larger ones. So I’d recommend sticking with SDHC or SDXC for the Nikon D5300. SDHC refers to cards that are 4GB up through 32GB. SDXC refers to cards that are 64GB or above. With the D5300 taking 24 MP photos, a card that’s at least 32GB will give you more room, especially if you’re shooting RAW.

If you’re doing video recording, you’ll need a card that’s designated as class 6 or higher. The reason is that when recording video the camera needs to write a lot of data to the card quickly. If your card isn’t able to write data fast enough, the video recording will stop. The current crop of memory cards are all class 10, so you’re better off going with one of them than searching around for an old class 6 card.

As far as brands go, I’d generally stick with the big, well-known ones. Sandisk, Lexar, Delkin, Sony, Samsung, Kingston, Panasonic, Toshiba, and Transcend are some of the main brands that make excellent cards, and you’ll be able to find one from those manufacturers that both meets your needs and is very reasonably priced. The most common brands that pros use are Sandisk and Lexar.

So here’s a mix of recommended memory cards that will work well in the Nikon D5300 and that are reasonably priced, readily available, and of good value. (Prices were current at the time of writing, but they have a habit of changing.) This list isn’t exhaustive, and there are both faster and slower cards that will also work, as well as smaller and larger ones. Because of the similarities between the two cameras, these recommendations are essentially the same as those for the Nikon D300.

Also, I’d recommend trying to buy from a reputable retailer. There are counterfeit cards on the market that often pop up from shady dealers. It’s also not a bad idea to have a spare on hand. Memory cards are remarkably resilient things but like any electronic device, they do fail from time to time.

If you’ve accidentally deleted videos or photos from your camera’s memory card, there’s still a good chance that you can recover it.

The next thing to do is to download data recovery software to scan the card to find recoverable data. There are a number of good options for doing this. I go into more detail separately in these posts:

Does the Nikon D5300 come with a memory card?

The Nikon D5300 doesn’t come with a memory card as standard. Some retailers might put together a special deal bundle that includes some accessories, but in general, you’ll have to pick up a memory card separately.

What type of memory card does the Nikon D5300 use?

Does the Nikon D5300 have internal memory?

The Nikon D5300 does not have internal memory that is user-accessible. It uses a small amount of memory for operational functions such as saving menu settings and as a data buffer as data is written to the memory card, but none of that memory is directly accessible to the user. All photo and video data are written to an SD card.

Images and product information from Amazon PA-API were last updated on 2022-12-05 at 05:20. Product prices and availability are accurate as of the date/time indicated and are subject to change. Any price and availability information displayed on Amazon Site at the time of purchase will apply to the purchase of this product.