What Type of Memory Card Does the Nikon D780 Use?

The Nikon D780 has two SD card slots and is compatible with SDXC UHS-II cards. Here are some recommendations on which cards to get. 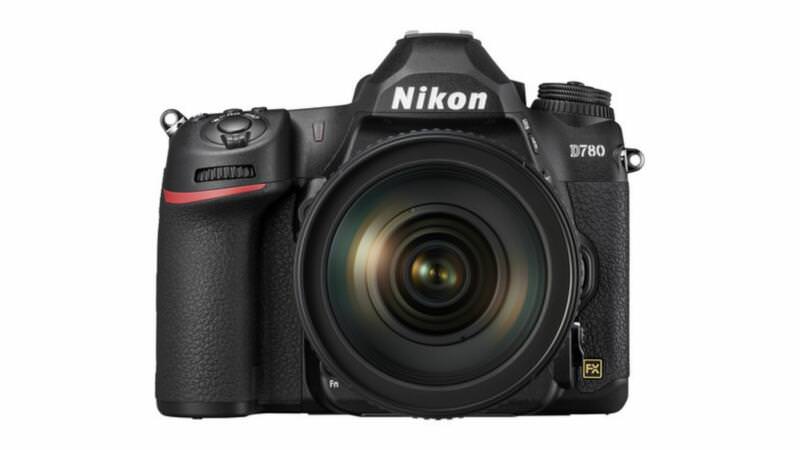 Quick Recommendations on SD Cards for the Nikon D780

If you just want some quick recommendations, here you go. Any of these will work well in the D780. These aren’t necessarily the fastest SD cards money can buy, but they’re a good combination of meeting the requirements of the D780’s features, have a strong track record of reliability, are readily available, and are usually cost-effective.

Any of these makes for a good choice. If you’re after more detail, you can find it below.

What Type of Memory Card Does the Nikon D780 Take?

A memory card is an essential accessory for the Nikon D780. Without it, you’re not going to be able to take many photos or shoot much video. But the D780 doesn’t come with one by default. There are some bundles that retailers put together that might include a memory card, but chances are it’s something you’re going to have to pick up separately. Or maybe you want something bigger with larger storage capacity—the cards that are included in bundles are often on the small side and might fill up quickly, especially if you’re on a trip. So which card should you get?

That’s where this post comes in—hopefully, to help you get out shooting sooner and taking full advantage of all the features of your new camera rather than spending your time searching the web and trying to make sense of cryptic technical codes. I’ve been buying and testing numerous SD cards for several years and have put many of the most popular SD cards on the market through their paces. You can find my main SD card tests here.

The Nikon D780 is a 24.5-megapixel DSLR with a full-frame FX sensor. Nikon categorizes the D780 as its advanced-entry-level camera in the FX full-frame DSLR series. It has the D610 below it in the series, and the D850 above it.

The D780 is especially strong in the video area, where it shoots up to 4K30 video and has a number of advanced features that videographers will appreciate. It has two SD card slots and has UHS-II interface. It’s compatible with SDXC, SDHC, and SD cards.

The D780’s instruction manual isn’t especially helpful on the topic of which SD card to get. This is what is buried on page 860 of the reference manual:

Approved Memory Cards
– The camera can be used with SD, SDHC, and SDXC memory cards.
– UHS-I and UHS-II are supported.
– Cards rated UHS Speed Class 3 or better are recommended for movie recording and playback. Slower speeds may result in recording or playback being interrupted.
– When choosing cards for use in card readers, be sure they are compatible with the device.
– Contact the manufacturer for information on features, operation, and limitations on use.

The video features of the D780 are those where a faster UHS-II card will particularly come into play.

The Benefit of Using Both Card Slots

The D780 has double memory card slots, but you don’t have to fill both to make the camera work. But there are advantages to using both slots.

The second slot can be used for overflow–or, put another way, to use the cards in series for maximum storage space–or you can specify that either NEF (RAW) or JPG files versions can be saved to one card and the other format to the other card. There’s also a built-in function to copy images from one card to the other.

So which SD card should you get for your Nikon D780? Here’s the more detailed version.

What I’m aiming to do here is provide some practical recommendations on which SD cards to get for the Nikon D780 so you can spend less time searching online and more time out shooting. I’m not trying to list every SD card that works in the D780–there are others that will work just fine as well. I’m focusing here on ones that offer a good combination of meeting the requirements of all of the D780’s features, are readily available at major retailers, are cost-effective, and come from major manufacturers with track records for good-quality cards. I’m also basing this on my own SD speed tests.

You’ll find a range of different acronyms and codes on SD cards. Here’s a quick overview of which ones to look for.

Most of the cards you’ll see available now have either SDHC or SDXC printed on them. The Nikon D780 will work with both SDHC and SDXC cards (and, for that matter, just plain SD cards, but they’re hard to find these days and have impractically small storage capacities).

These aren’t performance categories, as such. An SDXC card isn’t necessarily any faster than an SDHC card, and vice versa. But they’re important for compatibility with the camera and also in terms of storage capacity.

They’re categories assigned by the SD Association, which is the organization that oversees and develops the standards for SD and microSD cards. The difference between those two specifications is in the filesystem they’re formatted with–the SDHC specification uses FAT32 formatting, while the SDXC specification uses exFAT–but when it comes to buying memory cards, the practical difference is that cards 32GB and smaller will be labeled SDHC and cards 64GB and larger will be labeled SDXC.

The current generations of SD cards also have UHS-I or UHS-II on them (or often just an I or II). This refers to the type of interface that’s used to connect to the cards. It stands for ultra-high-speed bus.

UHS-I is the older, simpler bus interface. UHS-II is newer and potentially faster.

The SD Association has come out with various rating systems over the years to help buyers choose a card that’s suitable for use in cameras. Because recording high-resolution video (or, more specifically, high-bitrate video) is often the most demanding operation in terms of a camera and its memory card, it’s known as a video speed class rating system.

Most cards available now have a mix of old and new speed class codes printed on them. And while it’s helpful, it’s still an imperfect system for judging the speed of an SD card.

As a practical matter in the Nikon D780, cards that have any of these on them will be fast enough:

There’s a separate rating system that you might also see on some cards. They might have an A1 or A2 on them. You can ignore that when choosing an SD card for a camera. It’s designed for the kinds of operations that gaming devices and smartphones do.

What Size SD Card to Use in the Nikon D780

The D780 is compatible with SDHC and SDXC cards. That means you can use cards from 4GB all the way to the largest cards currently available, which are 512GB and 1TB cards.1

There’s really no right answer when it comes to what size, or storage capacity, to get–it’s mostly a matter of convenience so that you don’t keep running out of space. As is probably obvious, you can fit twice as many photos on a 64GB card as on a 32GB card. And with a 128GB card, you can fit four times as many photos as on a 32GB. And so on. And that’s especially handy when you’re traveling; even more so if you’re shooting any video. The most logical sizes for this camera in terms of convenience and price are probably the 128GB, 256GB, and 512GB sizes. But if you want to use a larger or smaller one, say 64GB or even 1TB, go right ahead–they’ll work just fine because of the way that the SDXC spec is designed.

Nikon does provide some estimates for the number of images and amount of footage you can fit on a 64GB SD card for various shooting conditions. These are very much estimates. Because of the way that image and video compression work, some scenes will compress more than others, which will, in turn, affect the filesize.

These are the estimates for the number of photos that will fit on a 64GB card using various shooting modes. These are the ones for shooting in FX crop; you can find the ones for DX crop here. For larger-capacity cards, just multiple by the appropriate amount (e.g., for a 128GB card, double them; for a 512GB card, multiple them by eight times, and so on). 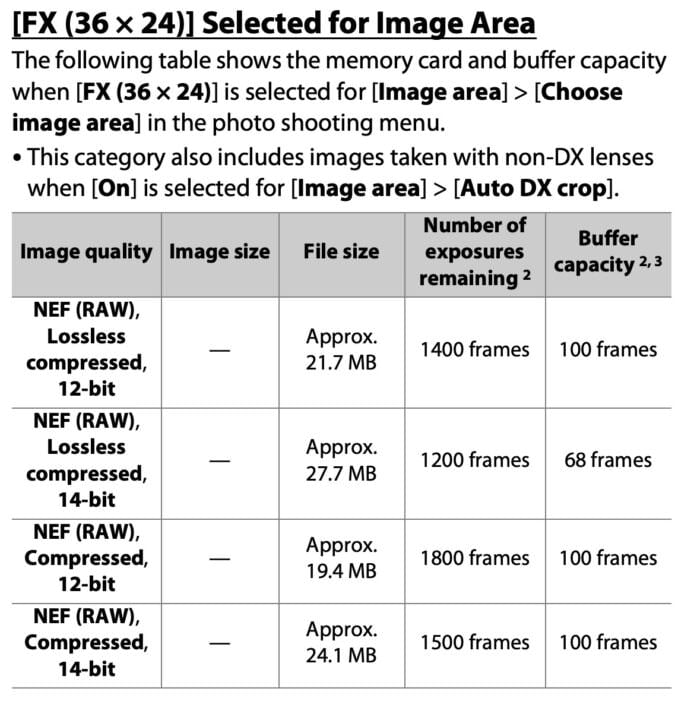 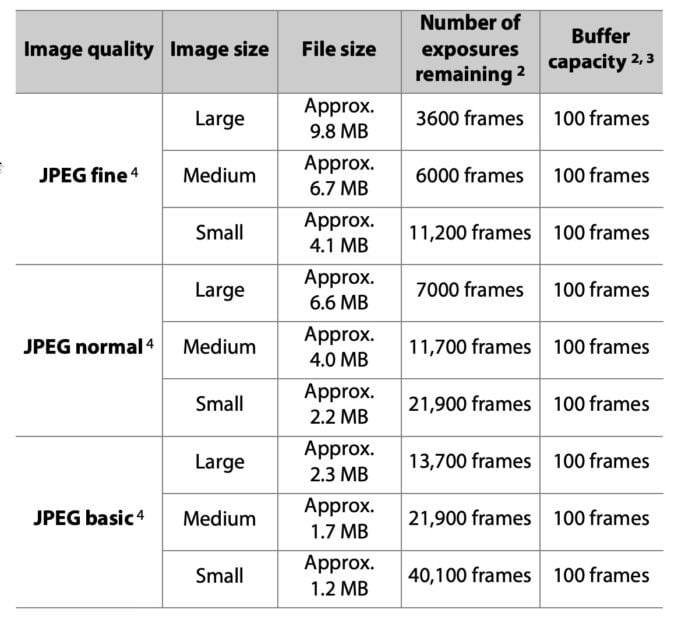 Do You Really Need To Get a Good Memory Card?

A better memory card is not going to help you take better photos or improve image quality. But it can let you take advantage of all of the camera’s features. A card that’s not fast enough to keep up with the camera can cause issues like locking up, dropped frames, and overheating.

There’s also the issue of reliability. There are plenty of junk memory cards on the market. Not only do they have flaky performance, but they’re also more likely to fail. And that means the risk of losing your photos and videos.

At the same time, you don’t want to pay extra for a high-performance SD card that’s overkill for the camera. This is why I’m trying to provide some practical examples here.

How to Format SD Cards

When you buy a new SD card, you should format it before use and then regularly after that. If you’re formatting a card that you’ve already been using, make sure that you’ve downloaded any photos and videos you want to keep, because formatting deletes everything on the card.

Here’s some information on how to format the memory card.

How to Format SD Cards in the Nikon D780

It is best practice to always format memory cards in the camera that you’ll be using them in. That sets the card up with the filesystem, folder hierarchy, and, in some cameras, a database file, so that the card is just how the camera expects. That greatly reduces the risk of unexpected errors and unpleasant surprises.

Always be sure you’ve backed up everything you want from the card, because formatting it will wipe everything. (If you’ve formatted accidentally, it still might be possible to recover data from the memory card, but it’s not always guaranteed, and it can incur the expense of buying recovery software; more on that below.)

On the Nikon D780, you can find the format memory card function under:

There’s also a shortcut method of formatting the memory card that you can use without going through the menu system. Press and hold the Trash Can and the ISO buttons together for 2 seconds. Then press them again to format the current memory card. You can switch which card is formatted by rotating the main command dial.

Having said that, it is still possible to format memory cards using a card reader and computer. You get a lot more flexibility that way, but also some extra risk if things aren’t set up just how the camera wants them. It’s also sometimes a good troubleshooting step if you’re having issues with a memory card.

There are some things to watch out for, particularly when it comes to choosing which filesystem to use. So I’ve put together guides on how to format SD cards on Mac and how to use the free SD Card Formatter app for Windows or Mac.

While memory cards are remarkably resilient, just like any electronic product, they can and do fail. So regular backups are highly recommended. Ideally, that should include a mix of local backups and off-site or cloud backups.