How to Format Memory Cards in a Nikon D850

The Nikon D850 has two methods for formatting the memory cards. One is obvious. The other is less obvious but is also quicker. 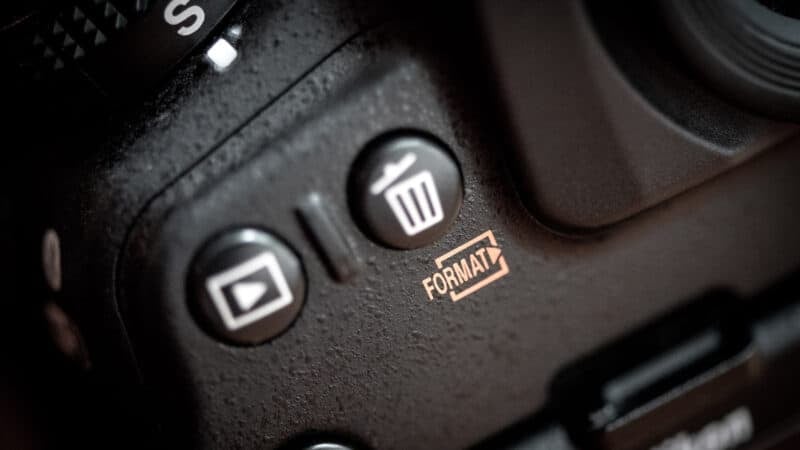 There are two ways to format memory cards in the Nikon D850. One method is obvious. The other is a little less so but also quicker.

So here are the two methods available on the Nikon D850.

First, the obvious one, using the menu:

The D850 cameras also offer an even quicker option for formatting the memory cards, although it’s not quite so obvious how to use it.

There are two buttons to look for: one on the top and another on the back. They have a red “Format” label next to them.

The one on top is next to the ISO button, near the shutter button.

The one on the back is the Delete button, which has a trash can / rubbish bin icon. It’s at the top left on the back of the camera.

There are two tricks to using these. The first is to use them together, simultaneously.

The second trick is that you need to press them together again. If you don’t, it won’t have formatted anything. You don’t need to hold them this time–it reacts immediately.

If you want to cancel without formatting, press any other button or the shutter. It will also cancel automatically if you haven’t selected anything within five seconds.

The Nikon D850 has two memory card slots, one of which is an XQD memory card slot, and the other is an SD card slot. In December 2020, Nikon issued new firmware for the D850 that made the XQD slot compatible with CFexpress B cards. It’s firmware version C:Ver.1.20. I have more detail on that here and a guide to checking and updating the Nikon D850’s firmware here.

After that firmware upgrade, and even if you’re using a CFexpress B card, the camera’s menu system and top screen still refer to it as the XQD card.

It’s best practice to format the memory cards in the camera, not in your computer. That’s true of any digital camera. It reduces the risk of file system corruption that can lead to memory card errors. Formatting in the camera lets the camera set the card up with the folder system and filesystem it needs and expects.

How to Format Memory Cards in a Nikon D850