A Go-Anywhere Flashlight for the Camera Bag

A small, reliable flashlight is a very handy thing to keep in your camera bag just in case. I’ve been testing out the NiteCore EA11, a tiny, rugged flashlight with impressive brightness.

A flashlight is one of those things I like to keep in my camera bag all the time, along with a few cable ties, a waterproof bag or two, and spare camera batteries and memory cards. It can come in handy in all sorts of situations, whether it’s while out camping, hiking, shooting star trails, or even just trying to find something in the bottom of your pack. When I need it, chances are I really need it. But at the same time, it’s not something I’m using all the time. And if I’m heading somewhere that I know calls for something with a bit more oomph, I’ll of course take something larger. But what I’m focusing on here is a just-in-case torch.

For this type of use, I have a fairly specific list of requirements. I want something that’s small, so that it’s not going to take up much space or add much weight to a bag I’m carrying around all day. It has to be reliable so then when I need it, it’s there. The capability of emitting a bright beam can be good in some situations. The batteries should last quite a while, and they should be of a type that I can replace at even the most basic store counter in the back woods of any country. Ideally, it should also be waterproof, so that a downpour while camping or a dunking while boating isn’t going to put it out of action. And, as a photographer, I also want something that has a low-intensity red light so that I can use it briefly while shooting at night without ruining my night vision too much.

I’ve recently be testing the NiteCore EA11 for this purpose, putting it through its paces in real-world use on a couple of recent trips. 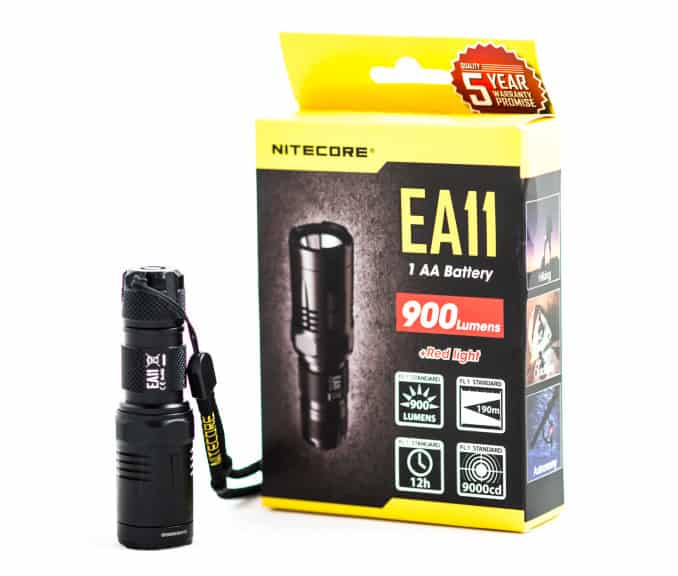 There are two types of measurement when it comes to flashlights. Lumens is the amount of total light that comes out, regardless of the shape or intensity of that light. Lux is the amount of light measured at a single point, or the intensity in a focused area.

The EA11 is rated by NiteCore for a maximum output of 900 lumens, which is very bright for such a flashlight that’s not much bigger than your thumb.

While the labeling on the box isn’t wrong, as such, it is a bit misleading by juxtaposing AA with 900 lumens. You’re not going to get anywhere near that figure with AA batteries; the maximum output with AA batteries is 160 lumens. To get above that you need to use a 14500 battery.

Similarly, the 12-hour runtime estimate is with a 14500 battery, with AA batteries allowing a maximum of 10 hours of use.

There’s no focus adjustment–it’s just a single shape of beam–but the beam is well-shaped for all-around use.

The red light is also very useful when photographing at night when you don’t want to ruin your night vision. The debate about how effective red light is in preserving night vision gets into all sorts of technical discussion of rods and cones and other things I don’t understand, but there is a consensus that it’s essential to keep the brightness low. A very bright red light is still going to impact your night version. So, appropriately, the red light setting on the EA11 is very low–it’s not simply changing the color of the regular white light settings. It works well for close work–finding something on the ground near your feet or in your camera bag, finding a switch on the back of the camera, or reading a map–but it doesn’t cast light very far.

There’s nothing complicated about the way the EA11 works, but there are a few nice touches. The on-off button is one of two small rubberized buttons on the side.

The second button, which is right next to it, is basically an options button. It lets you cycle through the different brightness settings or switch to the red light.

The buttons are easy to find by feel, but they’re also low enough that they don’t easily get bumped while they’re in the bag. I’ve had other flashlights that accidentally get switched on in my camera bag when I drop a lens or camera in, so that when I go to use the flashlight the battery is dead. I haven’t found that problem with this one.

And one of the features I like is that it remembers which brightness setting you were last using so that you don’t have to cycle through the whole series every time. That’s not only a convenience thing–it also means that you’re not having to pass cycle through the brightest settings if there’s some good reason you’re using a low setting to preserve night vision or what have you.

The batteries load into this flashlight in the traditional way by screwing off the top. There’s no way to recharge the batteries while they’re installed in the flashlight. It takes one battery, either AA type or 14500 type. There’s no need to make adjustments to switch between AA or IM14500–both just slide in normally, with the slight difference in length between the two types absorbed by the internal spring.

There are a variety of different battery options you can use with this flashlight. It doesn’t come with a battery, so you’ll have to buy one separately.

AA Batteries. The simplest is to use AA. It will work with either a regular disposable AA battery of a rechargeable one. It will also work with lithium AA batteries, which cost more but won’t give you much benefit on this particular device.

14500 Batteries. If you really want to crank up the light volume, though, you can also use a 14500 battery. They’re harder to come by and aren’t the kind of thing you find in your local convenience store, but they kick out a lot more power, which translates into a lot more brightness. But it doesn’t translate directly to significantly more runtime. They’re just a little longer than a regular AA battery, but you don’t need a special adapter cartridge to use one in the flashlight–the internal spring accommodates both types without any modification.

The different types of batteries output different brightness levels and also reap different runtimes. These are the runtimes claimed by NiteCore with fully charged batteries, but they should be treated as approximations when it comes to real-world use because there are a whole host of variables that can come into play.

I tested the device with both regular AA batteries as well as a rechargeable NiteCore NL147 750mAh 14500 battery. The latter outputs 3.7V with 2.8Wh and is rated for over 500 charge-discharge cycles.

With an 14500 battery on the flashlight’s brightest setting, ostensibly outputting 900 lumens, I actually got about 35 minutes of continuous runtime rather than the 30 minutes that NiteCore claims. By the end, the brightness visibly dims. It also gets very hot after a few minutes–too hot to hold comfortably with bare hands. So the highest mode is really only practical for short spurts.

I also tested with a brand new Duracell AA battery. While there are better AA batteries available, the Duracell is probably the easiest to find at just about any convenience store around the world. So it’s a useful practical benchmark. At full brightness, it’s not nearly as bright as it is using the higher-power 14500 battery. The device doesn’t get as hot, and I got about an hour and a half of continuous runtime out of it before it dimmed below the point of being useful even if it had dimmed below the full 150 lumens. That’s well over the 45 minutes that NiteCore claims.

So in both of these cases, I found that real-world performance in terms of runtime actually exceeded the manufacturers specifications.

It comes with a pouch that can be attached to a belt or bag strap as well as a wrist strap. It also comes with a couple of spare o-rings and a belt clip. 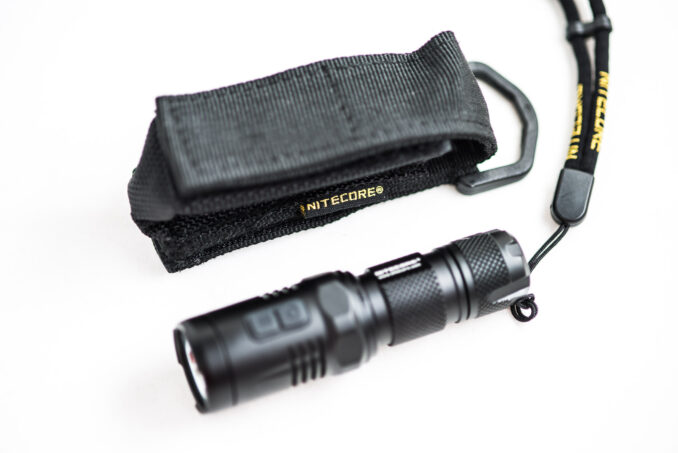 The nice folks NiteCore provided me with a review sample to test out, and I have to say that I’m impressed with this little flashlight. It ticks off all the requirements I’m looking for in a go-anywhere, carry-all-the-time fixture of my camera bag and travel kit. It’s small, rugged, has a useful set of brightness options, and is ready to go when I need it. Of course, who wouldn’t want endless battery life, but for a small, ultra-portable flashlight, I’ve found this one to perform very well and it has taken a permanent place in my camera bag.

A Go-Anywhere Flashlight for the Camera Bag