The Panasonic Lumix GH4 has a well-deserved reputation as a very good camera for video. I wanted to find out how it held up for stills.

The Panasonic Lumix GH4 has a well-deserved reputation as a very good camera for video. With 4K resolution, top-notch lenses, great handling, recording up to an impressive 200Mbps bitrate, and choices in which video codec to use, it has become a favorite as the core of a light-weight video rig.

I wanted to find out how it held up for stills. Had the engineers sacrificed still photo capabilities to focus on video? How does it stack up as an all-round, take-anywhere, photo and video camera?

I’ve long been impressed by the Lumix range of mirrorless cameras. The Panasonic Lumix GF1–which I still have and use as a backup–is a great little camera. Lightweight, with retro sensibilities, and yet with a real attention to detail in terms of quality, it’s just a fun camera to use. And the photos it put out are too shabby–I’ve had a couple taken with the GF1 that ended up full-page in magazines.

The GH4 is one of a surprisingly busy range of cameras from the Panasonic-Leica collaboration that’s under the Lumix brand. While not technically in the same series as the GF1 (that series is now up to the GF7) there is definite synergy between the models. They’re mirrorless, small, and use the same Micro Four Thirds lenses.

I tested the camera with the Lumix G X Vario 12-35mm f/2.8 Aspherical zoom lens. While not necessarily the smallest lens, it’s focal range is quite versatile for general shooting, being equivalent to 24-70mm on a full-frame DSLR.

As always, my focus is on real-world usage rather than clinical lab tests. If you’re after the latter, check out DPReview’s GH4 review.

The GH4 is styled like a small DSLR. Even though there’s no mirror chamber, the popup flash on the top takes up some space and makes it look like a more traditional DSLR shape. It doesn’t have the retro styling of the FujiFilm X-T1 or Lumix’s own GF7. The handgrip feels good (assuming you’re right-handed, as most cameras are). I don’t have especially large hands—if you do, it might feel a little cramped, but then that’s going to be true of most smaller cameras.

The controls are logically laid out, and it feels good in the hand. It feels solid and responsive.

I like that the rotator dial for selecting the shooting mode (P, A, Manual, etc) is an old-fashioned dial and locks unless you push down the center button. One of my pet peeves on some cameras is that it’s too easy to accidentally change the shooting mode when you put a camera in a bag or take it out of a pocket and then not realize that it has changed. 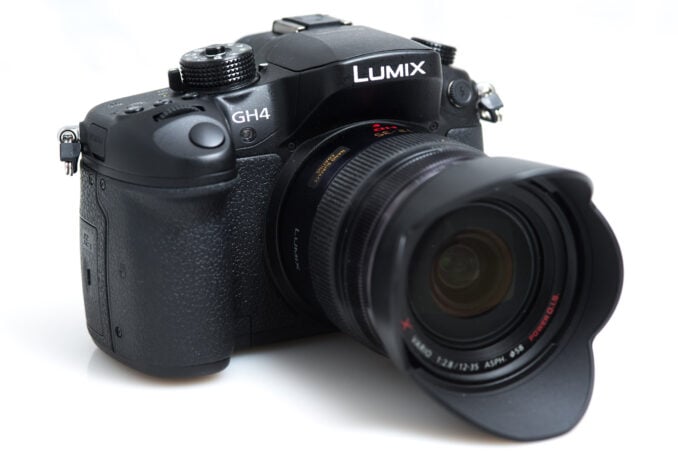 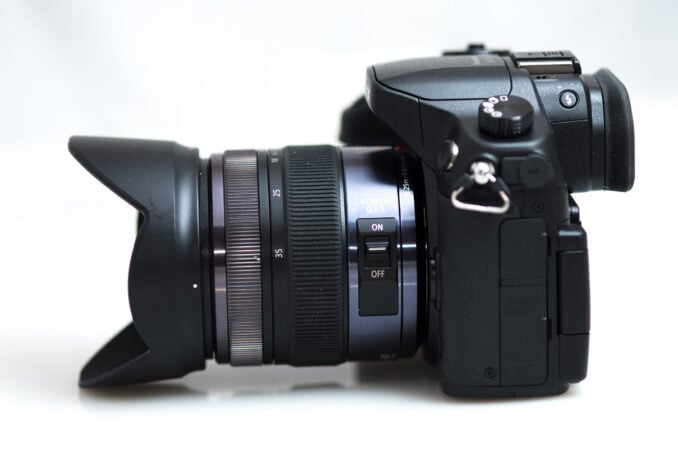 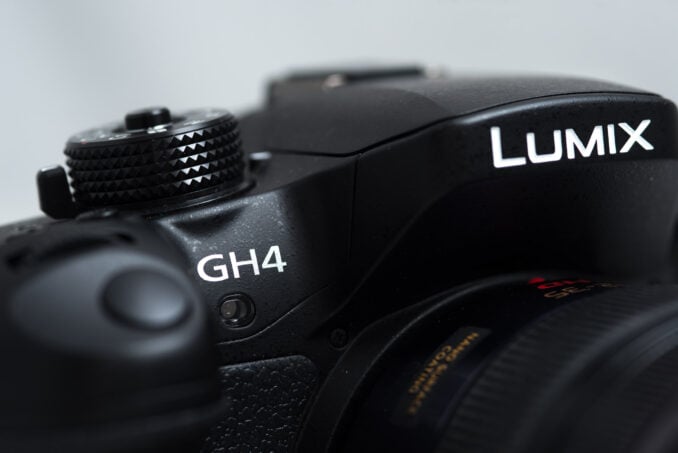 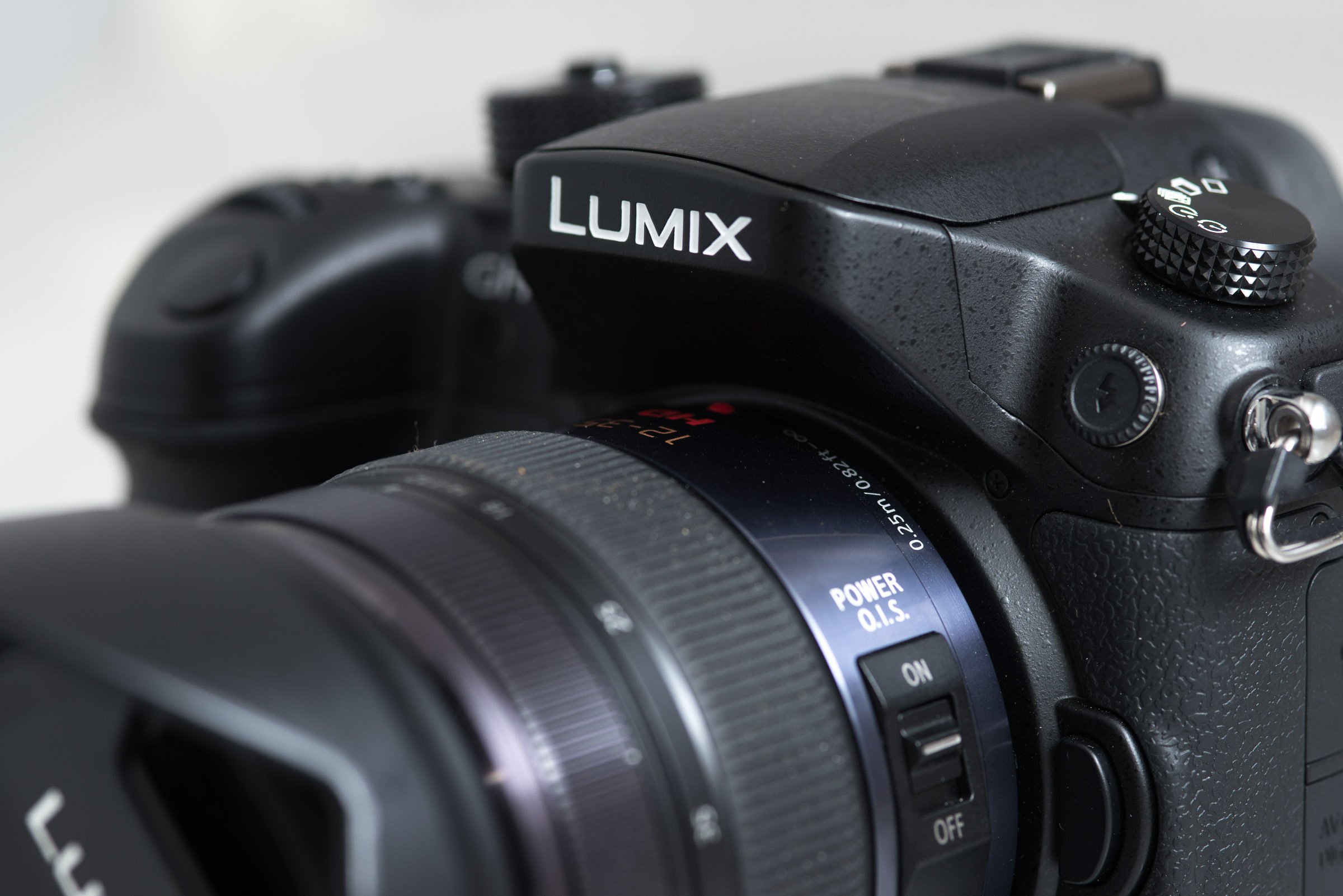 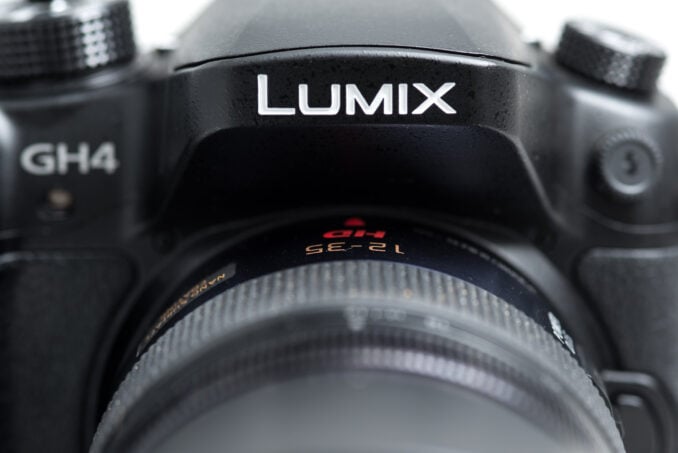 The buttons and controls are generally logically laid out. There’s a combination of digital-style buttons as well as retro-style, tactile dials for shooting mode and burst/timer modes. There’s a little too much emphasis on cryptic labels like “Fn2” and “Fn3” for my tastes. I know it’s designed to be flexible for assigning functions to them, but it’s just confusing at first. So I found it took a while to get to a point where I wasn’t stumbling over those.

Surprisingly, silent mode really is silent. At least in some shutter speeds. The longer shutter speeds you get an ever-so-slight indication that the shutter has gone off. But it’s remarkably quiet. It’d be very handy for wildlife shooting or in other situations where you don’t want to draw attention to yourself.

Autofocus is often an issue with mirrorless cameras. But I found the GH4’s to be very smooth without much searching. It’s still not as good as a pro-level DSLR, but that’s a limitation (for now) of contrast detection autofocus. 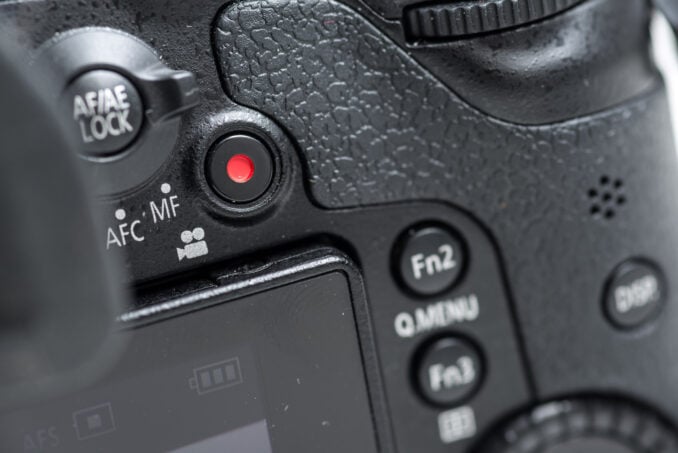 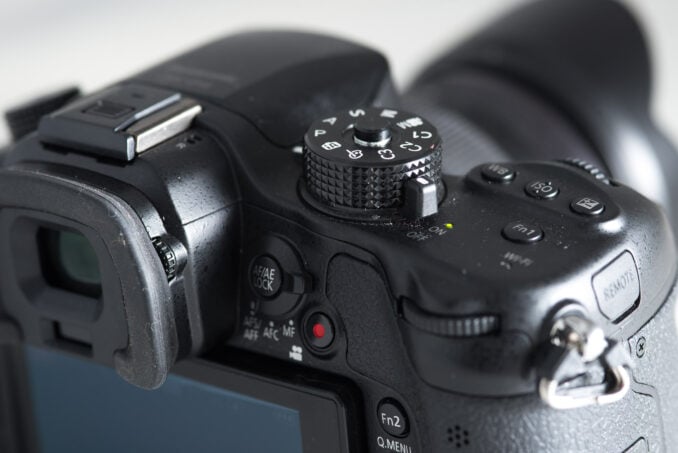 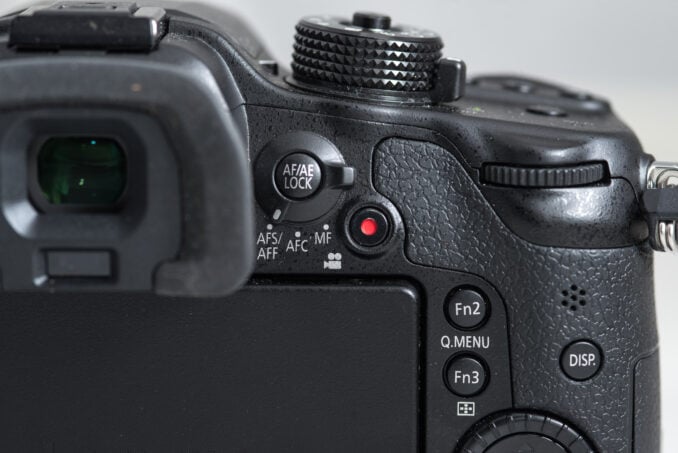 It’s a fully articulating LCD screen, so it flips out and rotates. That’s useful not only for shooting with different perspectives but also for folding away the LCD screen to stop it from getting scratched or bumped.

In addition to being bright and clear for both image and video playback as well as menu options, it’s also a touchscreen. That’s useful for navigating menus without resorting to dials and buttons, but it’s even more useful when shooting for choosing precise focus points that aren’t dead center.

You can also disable the touchscreen option if you plan on having the screen rotated fully around and don’t want to risk bumping it and accidentally changing modes.

There’s the usual assortment of overlays that come pretty standard on the current generation of cameras, but one that I particularly I like is the histogram overlay. It’s much more useful than eyeballing it if you’re trying to prevent blowing out highlights or blocking shadows. 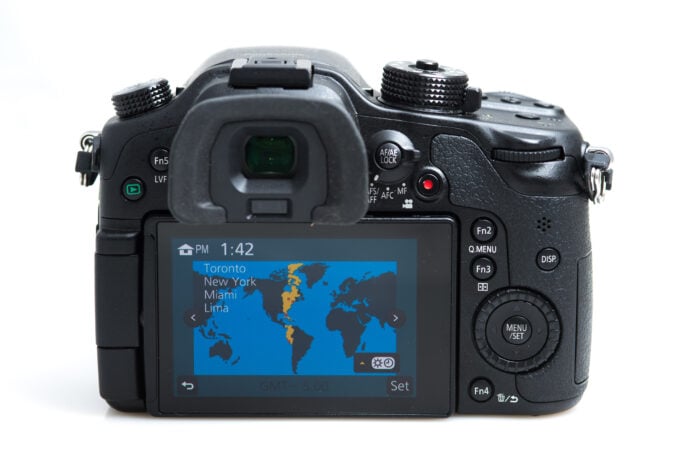 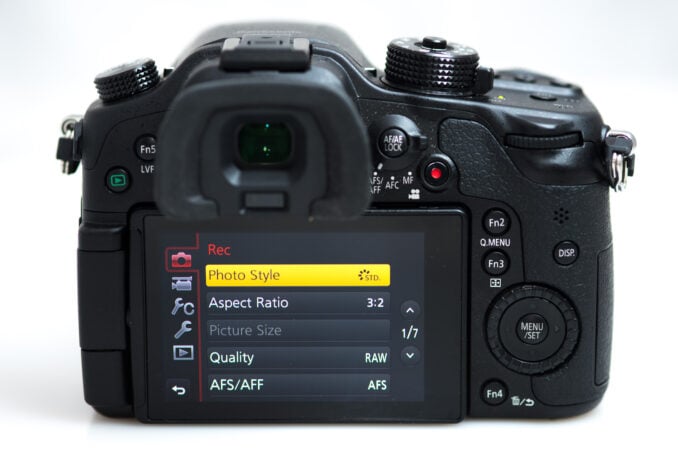 In general, I shot in RAW mode. There are all sorts of special effects you can apply in-camera to JPGs, from “Silky Monochrome” to “To Pop” to “Star Filter.” They become irrelevant when shooting RAW.

I found that there was quite good dynamic range. I preferred the results when underexposing from the in-camera meter by about 1/3 of a stop. The meter handled different kinds of lighting situations very well, from artificial lighting to sunlit clouds.

And there’s remarkably little grain even at ISO 3200, and colors and contrast remain stable even at those high ISOs.

The shots below have been minimally processed through Lightroom using standard light adjustments to exposure and contrast.

First up, here are some call-out that show the detail at 100 percent. 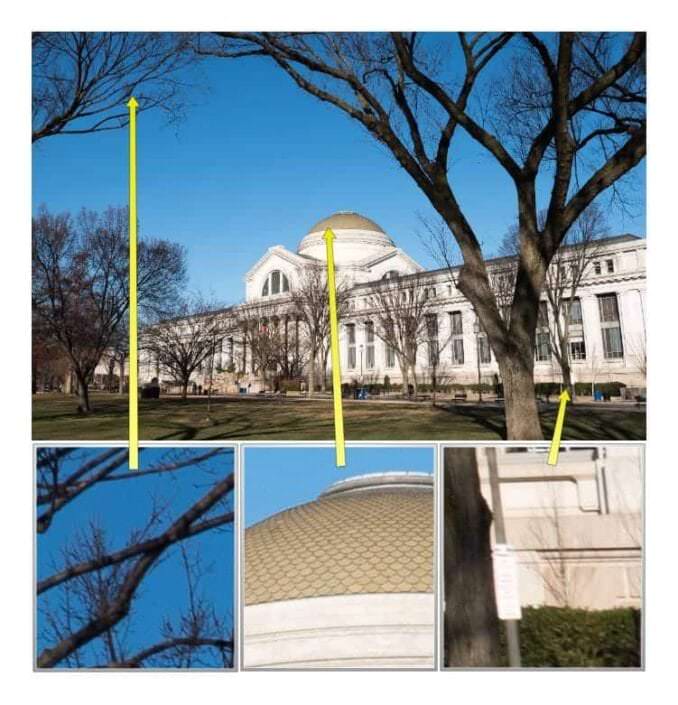 And here are some sample photos taking under different lighting conditions.

This isn’t unique to the GH4, but I don’t like how the screen locks for a moment after you take a photo as it writes to the card. I’m much more used to the optical viewfinder that isn’t interrupted aside from a split second blackout as the mirror slaps up. It gives you much better feedback on the next shot, especially for moving subjects.

I’ve previously reviewed the Fujifulm X-T1, and there’s a lot of overlap in the two models. Both have 16MP sensors, are similar sizes (although the body of the X-T1 is slimmer), are mirrorless, and have access to top class lenses.

The picture quality of the GH4 is pretty close to that of the X-T1 even though it has a smaller sensor. The GH4 doesn’t handle low-light quite as well–a symptom of the slightly smaller sensor, but there’s not much in it in “normal” lighting situations. I like the GH4’s handling better–especially its autofocus–although I like the X-T1’s styling better. In terms of video, the GH4 is an infinitely better camera–that’s not really a fair fight on that front.

For shooting nearly exclusively stills with only rare video, I’d be more likely to go with the Fujifilm X-T1. It has an edge in image quality and is better value for still images. But if you’re shooting much in the way of video, the GH4 makes for a compelling, versatile package. That said, both are excellent cameras, and both are wonderful tools to create stunning photos.