Sometimes you want an app that can accomplish basic image workflow tasks like resizing and watermarking simply, quickly, and with minimal fuss. That’s where apps like PhotoBulk come in. 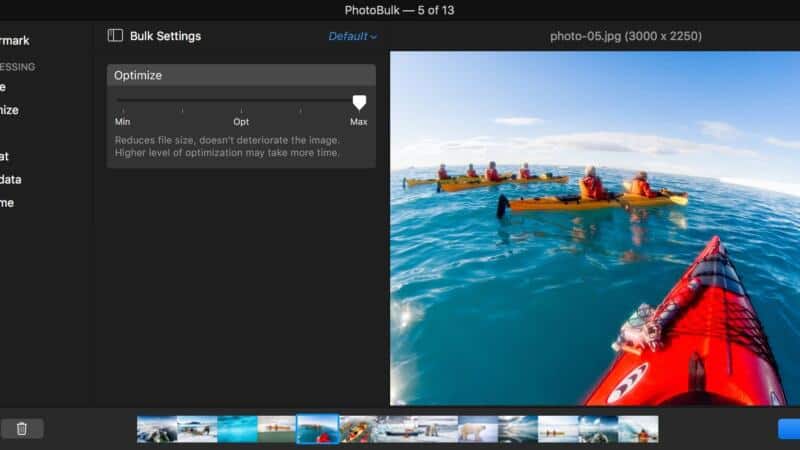 Mundane tasks like resizing and watermarking and renaming are essential parts of the photography workflow. They’re typically at the end of the workflow as you’re prepping the images to be shared in some way. But you’ll often find yourself applying the same settings–a certain size to upload to email previews to clients, for example, or applying a watermark to share on social media. The trick is not to let these mundane, repetitive tasks take unnecessary time and effort.

There are all sorts of methods and apps to batch process multiple images with tasks like resizing or watermarking or converting. There are heavy hitter apps like Lightroom or PhotoMechanic or Photoshop/Bridge. Those are incredibly powerful and have prices to match. At the other end are kitchen sink, free apps like XNView and IrfanView that can work with hundreds of different image file formats and do all manner of batch manipulations.

But sometimes you just want something quick and simple that gets the job done. And for that, I often turn to smaller, simpler apps like PhotoBulk.

PhotoBulk doesn’t necessarily do any of the basic image tasks like resizing or renaming any better than other apps, but it does get things done without fuss and with a clean and quick interface that minimizes the time and effort you spend on mundane tasks like these.

PhotoBulk has just come out with a 2.0 version of their app. There’s a new user interface and a bunch of improvements. It still focuses on the same core objective: letting you batch process common image tasks.

There are a six main functions: watermarking, resizing, optimizing, converting file formats, managing metadata, and renaming. You can do each of these as individual tasks, but the real power lies in being able to string several different tasks together and even save those batch processing tasks to be able to reuse them quickly again later.

Here’s a rundown of how each of the individual functions work. Something worth noting right up front is that none of these transformations or tasks are applied to the original images. They’re all applied as part of an export process that creates new versions. So it doesn’t damage your original images that you feed in–it creates new ones.

After you’ve imported your photos (drag and drop or use the + button at bottom left or go to File > Open or hit keyboard shortcut ⌘-O), you get a blank user interface like this: 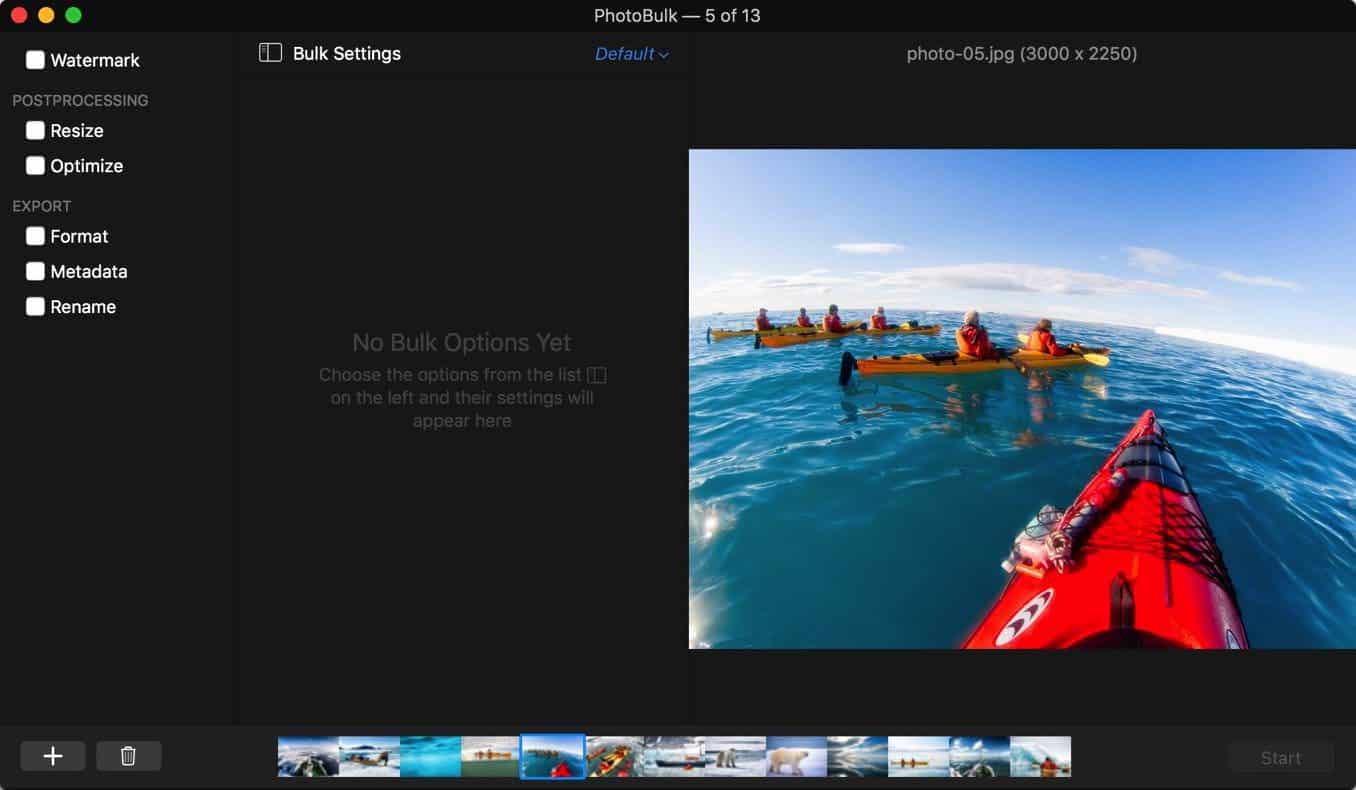 The image preview is the large main screen. At far left is the area where you choose the tasks. The section next to that is blank until you choose tasks. You can use the filmstrip at the bottom to select a different image to preview.

The watermark function lets you add a text, image, date stamp, or script overlay. For all of them you can do things like rotate, change the opacity, and move its position.

You can also add images. While you can adjust the opacity of the whole logo or image, if you want it to have a transparent background, save it as a PNG with transparency (PhotoBulk doesn’t let you use a PSD). The date stamp option simply applies the EXIF creation date, which is mostly useful for batching a bunch of different photos taken on different dates. The script overlay isn’t especially descriptive from its name, but it applies repeating text over the whole image; it’s not especially attractive, but it makes it much harder for someone to remove the watermark.

One of the new features that can come in very handy is that you can now add multiple watermarks at the same time. They can be mix and matched, so you can add a text watermark and a graphical logo, for instance, like this:

Resizing is, of course, one of the most common ways to manipulate an image. There are several methods available for setting the new size:

You can also check the box to prevent images being upsized if the original image is smaller than the dimensions you’ve set.

The optimize function reduces the file size of the images without any quality loss. There are a number of ways this can be accomplished, and the developer’s documentation doesn’t provide any details about what exactly is being done. From looking at the results it’s a lossless process, so it’s not simply reprocessing JPGs at a higher compression rate (that would result in a loss in quality).

You can choose the slider to control the aggressiveness of the optimization to balance filesize and processing speed.

The optimize function doesn’t do one of the most important parts of image optimizations–removing metadata. But you can do that with the metadata function by choosing “delete all”.

The format function is for converting between image file types. It only supports a handful of the most common file formats–not the 500 or so that some other apps can work with. And it doesn’t give you the kind of fine-tuned options that you can find in, say, Photoshop’s Save For Web tool. But it does the basics: JPG, PNG, TIFF, GIF, and BMP.

The metadata function lets you decide on keeping or removing sections of the image metadata. The options are grouped thematically into three groups: GPS data, camera info, and copyright and contact info.

You can also choose from “Keep All” or “Delete All.” The latter is particularly useful paired with the optimize function.

The renaming function is quite bare bones. You can specify a text string for the name and then apply a number sequence.

Putting it All Together: Batching Batches

None of those functions is particularly remarkable by itself. But the real value of the app is the ability to put multiple steps together and then save them all as a job that you can reuse on other images later. So not only is it applying tasks to a batch of multiple images, but it can apply multiple tasks as part of the same process.

This is where it can save you a lot of time with repetitive tasks like renaming and watermarking if, for example, you’re prepping preview files for clients or uploading photos to social media.

Building these job sequences is intuitive. You just check the box next to each individual function you want to apply and then set the parameters for each. You can use some or all of the functions–it’s up to you. 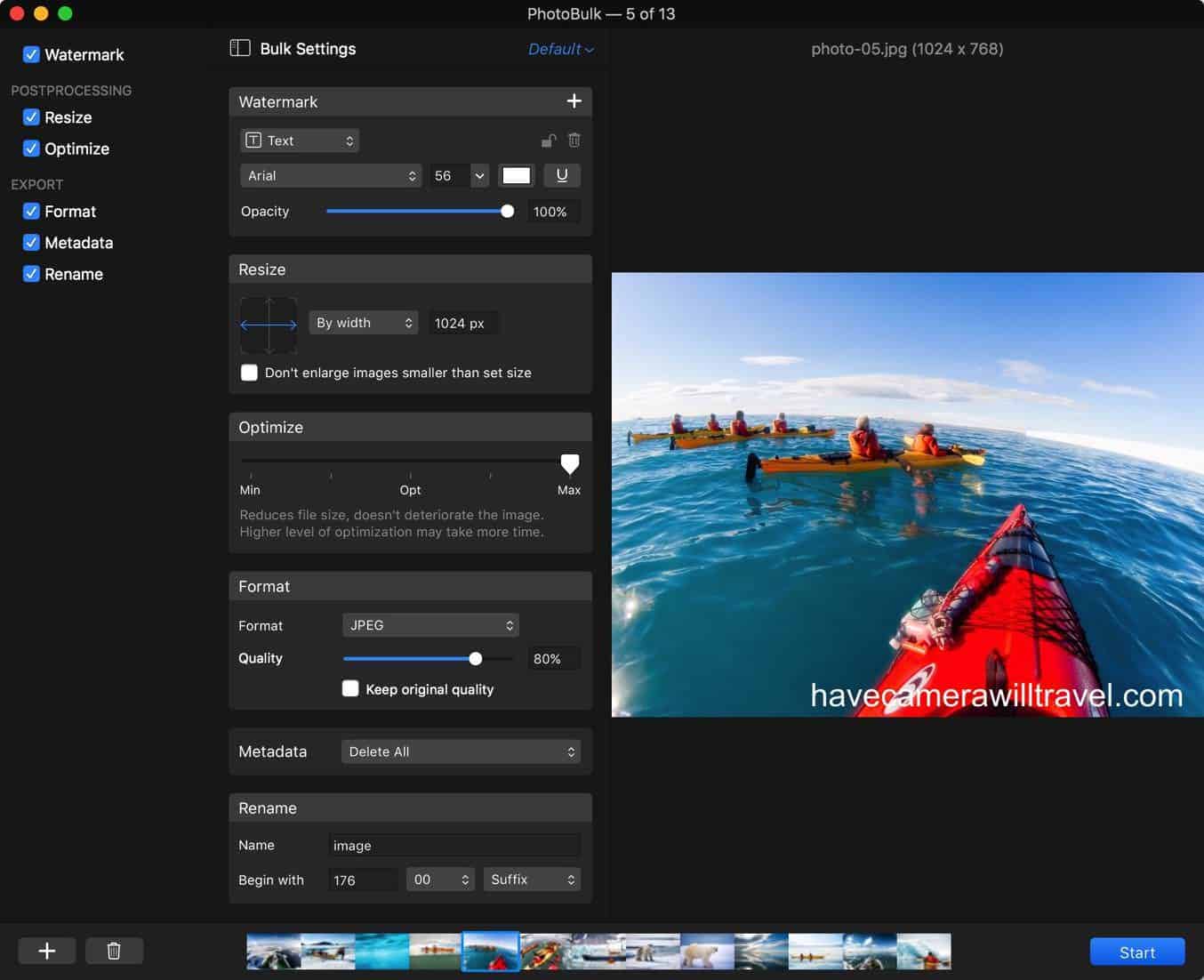 You can then save the job as a preset that you can reuse later (Presets > Save As). To select among these presets, use the drop-down menu in the middle at the top of the user interface (it selects “Default” by, well, default).

The Mac version of PhotoBulk is available in the Mac App Store. There’s also a demo version available.

The Windows version (including a demo version) is available through the Eltima website.