In their basic configurations, the Fujifilm Finepix XP120 and XP130 waterproof cameras don’t come with a memory card. Some retailers put together bundles with a few accessories to make the purchase more attractive. If you’re buying a bundle that includes a memory card, you’re all set. But chances are you’ll need to pick up an SD card separately before you get shooting.

To make it easier to know which memory cards work well in the XP120 and XP130, here’s a quick rundown of what specs to look for, along with some practical recommendations on specific cards. I’ve taken Fujifilm’s official guidance and combined it with my own experience with testing SD cards and shooting with these camera models.

The short version is that you don’t need a particularly fancy SD card for the XP120 or XP130. It’s not especially demanding of memory card speed by today’s standard, so you don’t need the latest and greatest (or the most expensive).

Quick Recommendations on SD Cards for the Fujifilm XP130 and XP120

If you’re just wanting the quick version, here are a few good options. I’ve found these to work well, to be readily available at major retailers, and to be cost-effective.

You’ll find a range of different acronyms and codes on SD cards. Here’s a quick overview of which ones to look for.

These cameras will work with both SDHC and SDXC cards (and, for that matter, just plain SD cards, but they’re hard to find these days). The difference between those two specifications is in the filesystem they’re formatted with–the SDHC specification uses FAT32 formatting, while the SDXC specification uses exFAT–but when it comes to buying memory cards, the practical difference is that cards 32GB and smaller will be labeled SDHC and cards 64GB and larger will be labeled SDXC.

There’s really no right answer when it comes to what size to get–it’s mostly a matter of convenience so that you don’t keep running out of space. As is probably obvious, you can fit twice as many photos on a 64GB card as on a 32GB card. And that’s handy when you’re traveling. The most logical sizes for this camera in terms of convenience and price are probably the 32GB or 64GB sizes. But if you want to use a larger or smaller one, say 128GB or 16GB, go right ahead–they’ll work just fine.1

Regarding speed, the XP120 and XP130 aren’t especially demanding. The camera uses it’s built-in temporary memory when you’re shooting in burst mode, so that’s not much of an issue. And even when shooting video, the bitrates of the video modes are relatively low (I have more details on this below). So you don’t need to go for a super-fast SD card. You can use one if you like, but the camera won’t perform any better with it.2 In terms of those marking on the cards, it makes sense to aim for Class 10 or U1. You can get away with slower if you’re not shooting video, but because SD card technology is constantly improving, it’s actually becoming hard to find new cards for sale that are slower than class 10 and because of the way the market works they probably won’t be any less expensive anyway.

With that said, here are some practical recommendations. They’re based on a combination of Fujifilm’s official guidance and my own SD card tests. It’s not designed to be a comprehensive list–there are plenty of other SD cards that will also work well–but these are ones that are a combination of reliable, readily available, cost-effective, and work well in the XP120 and XP130 cameras.

The SanDisk Extreme line is a good option when the emphasis is on video recording. They have faster write speeds than SanDisk's Ultra line but still make for good value without getting in the faster (and more expensive) Extreme Plus and Extreme Pro models.

SanDisk recycles its model names. This latest version of the Extreme card is rated for V30/U3 for video recording and uses a UHS-I interface. It's faster than this camera technically needs, but because the Extreme line is so popular, they're generally easy to find and competitively priced.

It comes in sizes ranging from 16GB through 256GB.

One distinctive thing about this range is that they're available from 16GB up through a whopping 512GB.

PNY as a brand isn't as well known as some others, but they've been around a long time and make very good memory cards that are usually very competitively priced and good value.

This particular model is available in sizes ranging from 32GB through 512GB.

Delkin Devices have been around for a long time but have been relatively quiet in recent years. But they're freshed their entire lineup of cards recently to simplify the range and bring the cards up to current specs.

Transcend isn't as well known as SanDisk or Lexar, but they've been making solid, reliable memory cards for a long while now and their SD cards are often competitively priced.

This particular card is faster than this camera needs, but it is still a good option. It's available in sizes from 64GB up through 256GB.

Though not always as readily available as some other brands, Sony memory cards are very good, which won't come as much of a surprise.

This particular card is available in sizes from 16GB through 256GB.

This particular card (model SDS2 Canvas Select) isn't the fastest in Kingston's range, but it's fast enough to work well in this camera. It's available in sizes from 16GB through 128GB.

Video Bitrates on the Fujifilm XP120 and XP130

The top video mode on the XP120 and XP130 is 1080p60. It records with variable compression encoding that averages a little under 15 Mbps (megabits per second). Compared to many other cameras on the market now, that’s quite low. It means that the stream of data that needs to be written to the memory card while recording video is relatively gentle. What that means for choosing an SD card is that you don’t need one that’s especially fast.

Here’s a quick rundown of the approximate bitrates used for recording video on the XP120.

These are calculated from the figures Fujifilm provides in the manual. It’s important to note, though, that they’re approximations. Because of the way JPG image compression works, the final filesizes will vary image to image, depending on things like the detail and tonal complexity of the image. So while these are useful guides, it’s worth leaving yourself some wiggle room if you plan to cut things fine.

How Much Video Footage from the XP130 and XP120 Will Fit on a Memory Card?

These are again calculated on the figures given in the manual. The durations are given in the HH:MM format (ie. hours and minutes).

To clarify, the durations in the table above are cumulative totals referring to storage space. It’s not the same thing as how long you can record individual video clips for. Here are the maximum times for individual clips in the various modes on the XP120 and XP130:

If you format the card before you’ve backed up the photos from it, it might still be possible to recover them. To do that you’ll need to fire up the computer–it’s not something that you can do in the camera. I’ve put together an overview on how to recover deleted photos from an SD card.

It’s always best practice to format memory cards in the camera you’re going to use them in, but if that’s not possible or not what you want to do, you can also format cards using a computer. But there are some things to know when formatting SD cards to minimize the risks of your camera having problems with them. So I’ve put together guides on how to format SD cards on Mac and how to use the free SD Card Formatter app for Windows or Mac.

Popular Accessories for the Fujifilm XP120 and XP130

Here are some of the popular accessories if you’re looking to kit out your XP130 or XP120. 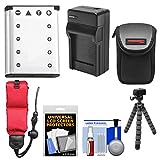 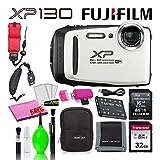 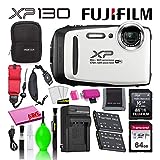 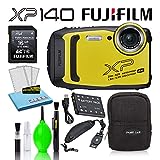 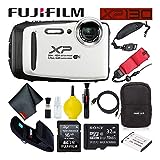 Images and product information from Amazon PA-API were last updated on 2021-01-24 at 05:49. Product prices and availability are accurate as of the date/time indicated and are subject to change. Any price and availability information displayed on Amazon Site at the time of purchase will apply to the purchase of this product.