UPDATE: The specific model I reviewed here is no longer available. Here’s a newer model:

It wasn’t that long ago that a 20GB hard drive seemed huge. Now, with 4TB and 6TB hard drives common and relatively inexpensive, a 20GB is basically a paperweight. But each drive has its own enclosure and own power supply. Trying to keep track of which power supply goes with which hard drive becomes a real pain.

So several years ago I switched to using bare hard drives instead most of the time. Basically, that means you use the same kind of hard drive that you could insert in a desktop computer or laptop, without any fancy enclosure or power supply. It turns pretty much any hard drive into an external hard drive.

Bare drives are typically much more cost-effective than getting one in an enclosure, and you don’t have to keep track of power supplies. They’re also much easier to store when you get an inexpensive case like these. And they are also an excellent way to naturally dissipate heat that doesn’t require a noisy fan.

When you’re storing your bare hard drives when they’re not in use, there are a all sorts of storage cases to protect them. I’ve found these types work well. 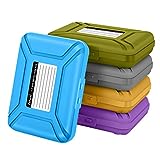 To use these drives as external drives, you need some kind of mounting connection. The first generation of those were clunky, involving bare wires and connectors. Then someone had the bright idea to create a docking station that you simply stand the drive in–no screws or other fiddly attachments.

I’ve been using those for years and they work well. If those are bulkier than you’d like and clutter your desk too much, there’s a new generation of hard drive cradle that’s coming out that provides a slimline option.

I’ve recently been using Inateck’s newly released version and have found it to work well. The cradle itself fits out of the way under my monitor and I simply slot in whichever hard drive I want to use. It does the same thing as the vertical-standing options, just with a smaller profile.

There’s aren’t many bells and whistles. There’s an on/off power button, but other than that it’s pretty straightforward.

Adding a hard drive is easy–you just slide it in until it clicks on the connector. There’s a small LED light on the top that will tell you when the drive is properly inserted and connected. The same light also serves as a hard drive activity indicator.

If you want to switch out the hard drive, the device is hot swappable, which means you don’t need to restart the device or your computer. Simply eject the drive through your operating system (always recommended to reduce the risk of corruption) and then slide the drive out and put in a new one. No tools are required, and there’s no risk of losing those pesky tiny screws.

Three’s a power button, a socket for the AC adapter, and a USB 3.0 socket.

The top has two small LED lights. One indicates power status. The other indicates hard drive activity (and connectivity).

The drive slots in until it clicks, but there isn’t any safety lock holding it in place–just gravity.

This is the part that slots into the hard drive itself.

What types of hard drives work with it?

The docking station uses the SATA standard for 2.5″ and 3.5″ hard drives. You can use traditional magnetic drives or solid state drives (SSD). This cradle accepts hard drives up to 4TB in size.

Bare drives are also sometimes known as internal drives or OEM drives. Good places to get them are places like Newegg, Amazon, or BestBuy.

How many hard drives does it take?

You can use one hard drive at a time. If you’d prefer two at a time, take a look at the dual standing options like this one.

What kind of connection does it use?

It uses USB 3.0 (which is also backwards compatible to USB 2.0). Unless you get some kind of separate adapter, it doesn’t work with Thunderbolt, Firewire, or eSATA connections.

How fast is its transfer rate?

It uses USB 3.0, so Inateck rates the transfer rate as up to 5Gbps. In real-world use, transfer rates are typically somewhat slower than the maximum ratings (that’s applicable to any device, not just this one). If you’re using it on a USB 2.0 it’ll be significantly slower than that.

Does it require AC power?

Yes. You can’t run this solely from USB power.

Do you need any special drivers? Is any special setup required? What operating systems is it compatible with?

No special drivers are needed. It’s designed to be Plug and Play, which means you should just plug it in and it should work without any special software setup. Inateck says it works with Windows XP, Vista, 7, 8, 8.1 (32 & 64-bit) as well as Mac OS X. I’ve only tested it on Mac OSX 10.10 (Yosemite) and it works normally with that.

The one proviso to the “no software setup” bit is that your hard drive needs to be initialized before it can first be used. (How to initialize new hard drives). That’s something you need to do with any new hard drive and doesn’t have anything to do with the docking station. Some external hard drives in enclosures come pre-initialized (also known as pre-formatted).

Is it good for travel?

There’s no real reason it wouldn’t work for travel so long as you have access to AC power where you are. The cradle comes with a 100-240V switching power supply (but not international adapters). It doesn’t come with a protective case, so you’ll need to be careful about getting dust or lint in the connector socket.

If you’re producing massive amounts of video footage that you need to back up on the go it might be a good option that could work out more cost-effective than multiple portable drives. For most photographers on the go, a much smaller portable hard drive that runs solely on USB power might be a better option.

What’s in the box?

The docking station (cradle), a power supply, and a USB 3.0 cable. It does not come with an instruction manual, but it doesn’t really need one.

Where can I find the manufacturer’s technical specifications.

Images and product information from Amazon PA-API were last updated on 2020-07-04 at 16:59. Product prices and availability are accurate as of the date/time indicated and are subject to change. Any price and availability information displayed on Amazon Site at the time of purchase will apply to the purchase of this product.