Need to stream or record some live event video but don’t want to mess with the complications or expense that usually come with that? The Mevo Plus is like having a basic TV studio in your pocket. If you’re looking to live stream interviews, panel discussions, church sermons, or even school plays, the Mevo Plus makes for an invitingly simple and effective solution. And relative to other video solution, it’s also surprisingly cost effective.

There are plenty of cameras for recording 4K video. And there are also plenty of cameras that can stream a live view. Where the Mevo Plus comes in is in doing those things but also adding sophisticated real-time production tools that bump up the professionalism and user-friendliness of the footage.

If you’ve ever tried to broadcast a live event, whether it might be a council meeting, church service, kids’ play, or poetry recital, you will probably have run into some of the very real road bumps that you have to overcome. A single, static shot doesn’t hold the viewer’s attention well, and simply sticking a smartphone up doesn’t do much to project professionalism. You have to try to navigate the rabbit hole of technology that’s involved, from video codecs to cameras to live streaming web formats. You have to have someone manning the camera. And then, chances are, you’re going to have to spend a lot of time and computer hardware in encoding and post-production even before your viewers ever get to see it.

The point of the Mevo Plus is to cut through all that and make the whole process as straightforward and simple as possible, all while creating a more visually appealing product.

When powered up, the light gray ring around the top has colored LEDs under it that provide feedback on key functions and status.

I reviewed the original Mevo some time ago. They’re now out with a new version, the Mevo Plus, and they sent me one to try out.

It looks the same, and in basic usage, it’s fundamentally the same. The differences are under the hood, especially related to improving the wireless connections in and out of the camera to make for a stronger, faster, and more reliable signal.

The core function of the Mevo Plus is to capture video. But there’s an important distinction that affects the resolutions and bitrates you can use: the distinction between broadcasting live streaming video and recording an mp4 file for later playback or sharing. The Mevo Plus can shoot in 4K, but that doesn’t mean you can use 4K for everything.

Recording. Like its predecessor, the Mevo Plus can capture video in 4K (3840 x 2160 px), a size that’s also often known as Ultra High Definition (UHD) and less often called 2160p. It captures at 30 frames per second and saves the video encoded with the H.264 codec in an mp4 container. At the maximum resolution the video records at a bitrate of 40 Mpbs, so you’ll need a relatively fast memory card to keep up–cards rated for the U3 video recording speed spec are recommended. Something like the SanDisk Extreme range is a good option.

The camera itself can live stream up to 1080p30 (there are also lower settings available: 720p, 480p30, and 360p30) with a video stream of a bitrate up to 6 Mbps. At the lower resolutions, the bitrate varies by whether you’re sending the stream out over wifi, LTE, or ethernet.

The Mevo Plus is directly compatible with Vimeo’s new live streaming service, Vimeo Live, and with Vimeo Live you can broadcast streams up to 1080p30. It can also work with other streaming platforms like Facebook Live, Youtube, and Twitter, although you’ll have to work within those platforms’ native resolution and bitrate limits; not all of those support 1080 streams yet. Facebook, for instance, is limited to 720p.

And if you want to simulcast to more than one platform simultaneously, there’s an option Livestream Mevo Plan for $10/month to add that functionality.

Production on the Fly

The camera itself is just one part of the Mevo Plus system. And that’s one of its real strengths: that it’s a complete package and is surprisingly user-friendly to boot.

You operate it by connecting it wirelessly to a smartphone using the free Mevo app. From initial connection through the more advanced features, it walks you through clearly every step of the way. It’s not perfect every time–I ran into some issues updating the firmware that it had prompted me to do–but overall I’ve found the user experience to be excellent and very well thought out.

The really unique part of the Mevo system isn’t so much the camera as it is the smartphone app that interacts with it. That’s a collection of production tools that enable you to broadcast a much more professional looking live event that tracks the action or end up with a publish-ready video of an event right out of the camera with no (or very little) further editing required.

Using nothing more than the smartphone app, you can direct your own TV broadcast. The app shows a live view of what the camera sees. By simply tapping on a part of the screen you can focus in on a part of the action, and with a 4K sensor, it leaves plenty of room to zoom in and still maintain high resolution. If you tap on the screen, it does a simple cut. If you drag, it does a smooth pan or tilt transition. By pinching or spreading your fingers you can zoom in or out. You can save static shots as well as apply adjustment filters. It’s all quite intuitive and uses the same kind of gestures you’re probably already used to.

And if you’d rather not direct it–maybe you’re participating in the interview or session yourself–you can set it to autopilot. It can also use face recognition to follow the action.

As much as the idea of video broadcasting a live even it might sound daunting at first, it’s all surprisingly intuitive once you start using it. Quite remarkably, you can get up and running within minutes. You can get good results right off the bat, but naturally you’ll get smoother and more professional-looking results as you use it more, especially when it comes to the cuts and on-the-fly edits that work best for the specific circumstances.

Refreshingly, the Mevo Plus comes with the gear you need to get started. That includes a memory card–it’s only a 16GB card, but it’s still nice that it’s included. You can obviously pick up a larger card if you want more space for recording. There’s also a microUSB cable and AC charger for charging. And there’s the Mevo Mount, which gives a small platform for freestanding the camera or screwing it onto a tripod or stand (standard thread).

There are also some optional accessories that can significantly improve the Mevo system’s feature set. These aren’t included in the basic Mevo package, but they are sold bundled as a kit. 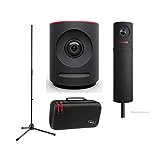 The Mevo Boost is the most useful accessory for the Mevo Plus. It’s an extended battery (12,000 mHa) that can extend your shooting time (about 1 hour without it; up to 10 hours with the Mevo Boost). It adds both an ethernet port for wired live streaming as well a USB port that you can connect to an LTE stick for wireless streaming over a cell network. On the bottom is a standard tripod/microphone stand attachment. And it also acts as a stand for the camera. And as an added bonus, it’s also rated for IPX4 weather resistance, which is enough to withstand light rain and splashes.

This is the docking part of the Mevo Boost, with the camera sitting on top of here. And then you twist the lock on the side to secure it.

The ports on the Mevo Boost: ethernet, USB, and microUSB.

The Mevo Case a light, rigid case with cutouts for Mevo Camera as well as the Mevo Boost and the Mevo Mount. There’s also room for things like cables, memory cards, and other small accessories. It’s by no means the only case that will work well, but it’s a convenient and portable solution.

The case has customized cutouts to fit the various components such as the camera and the Mevo Boost.

There’s now a branded Mevo Stand. It’s basically a standard microphone stand, and there’s nothing distinctive about it that says you have to use this one–any mic stand or tripod will work just as well.

You can find the Mevo Plus at Amazon, B&H Photo, and Adorama.

It’s available in various bundles, ranging from just the camera to a bundle that includes the Mevo Boost, a case, and a stand. 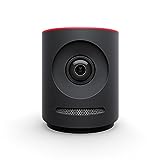 Mevo Plus - The Live Event Camera, Stream in Full HD 1080p or Record in 4K,...
Check Price at Amazon

Images and product information from Amazon PA-API were last updated on 2021-01-21 at 07:49. Product prices and availability are accurate as of the date/time indicated and are subject to change. Any price and availability information displayed on Amazon Site at the time of purchase will apply to the purchase of this product.