The Nikon D3400 is what’s known as an entry-level DSLR. For camera manufacturers, that means it’s the simplest and cheapest in their range. They’re generally the simplest to use and have a trimmed-down set of features compared to their higher (and more expensive models).

In practical terms, that means that for many owners it might be their first DSLR. It might be your first “real” camera stepping up from a smartphone or point-and-shoot. And because DSLRs work a little differently from a smartphone or even many compact cameras, it might not be self-evident how to get the photos and videos from the camera to a computer, whether that’s a laptop or desktop, Mac, Windows, or Unix. That’s where this guide comes in.

There are a few ways to download your photos and videos from a Nikon D3400 to a computer. None of them is particularly complicated or difficult, although some methods require a separate accessory memory card reader. But there are also good ways to do it without buying another accessory.

So, here’s a rundown of various options for downloading your photos and videos from a Nikon D3400 to a computer, including using wired connections and wireless.

And just so everyone’s on the same page, it’s worth saying that with a DSLR like the D3400, the images are stored on the SD card in the camera. That’s different from a smartphone, for instance, where photos and videos are typically stored in the devices own internal memory.1 So, what we’re really talking about with all these methods is downloading the photo and video data from a memory card to your computer. And in the D3400’s case, it takes SD cards; if you’re wondering what the best kind of memory card for this camera is, I have much more detail on which SD cards to get for the D3400, here.

There are two other approaches to getting images and video streams from your D3400 to a computer. One is to use the D3400 as a live-streaming video webcam; I have a detailed guide on that here. The other is similar but is known as tethering. That lets you connect a camera to your computer, either with a USB cable or with the SnapBridge mobile app, to control some of the camera’s features from the computer (and download the images/video in near real-time). But those are both more specialized operations that work a bit differently from what I’m describing here.

Connecting the D3400 to Computer with USB Cable

This is the simplest method for downloading photos and videos from your D3400 to your computer. And it doesn’t require buying another accessory. It just uses the micro-USB cable that comes with the camera.

If you’ve misplaced that original cable and need a new one, replacements are easy to find and not expensive. But there is a bit of a catch: not all micro-USB cables will work with the data transfer that the D3400 needs. By all means try any others you have lying around to see if the camera mounts to your computer. If it doesn’t, you can pick up replacement transfer cables like this aftermarket version or this one. If you’d prefer to get the Nikon original, the model number you’re after is UC-E20, and you can find them at camera specialists like B&H Photo.

Many cameras can charge the battery directly when you plug in the USB cable, but the Nikon D3400 isn’t one of them. On this camera, the USB is used only for data transfer, not charging. Which suits our purposes here just fine, even if it’s a bit of a nuisance for charging.

The rest is handled by software on your computer. There are any number of software apps that will work for this, from something like Lightroom to Adobe Bridge to the built-in camera and file browser apps (e.g. Finder (Mac) or Explorer (Windows)).

You don’t need software that’s specific to a Nikon D3400; nearly any file management software can handle the basic process. On many of the more advanced image editing apps, you’ll be looking for an “import” or “ingest” function. On the file browsers like Finder and Explorer, you’ll be treating the files as normal files. Look for the files under the DCIM / 101D3400 folder/directory.

Many laptops—and even some desktops—come with a SD card reader built-in. But even if yours doesn’t, the good news is that they’re cheap. You don’t need a fancy or expensive card reader. Something simple like this one will work perfectly well here. 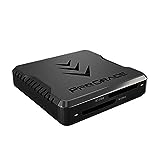 Right off the bat, I’ll say that this method rarely makes much sense for downloading photos and videos from a D3400 to a computer. It’s much slower, much more tedious, and much more cumbersome. But since it does technically work, I’ll include it here.

The Nikon D3400 does have Bluetooth wireless capabilities, but they’re pretty limited. And using them to transfer photos to a laptop or desktop is tedious and convoluted. It makes much more sense for downloading images from your camera to a mobile device like a phone or tablet. The only time it makes much sense to me to do it this way is if I’m on the move and want to select which images I want to work on later without opening up my laptop. In other words, a kind of on-the-move intermediate step.

When you connect your D3400 to the SnapBridge app (I have a detailed guide on how to do that here), you’ll get the options to download media or to control the camera. For our purposes here, we obviously want the download option.

Images and product information from Amazon PA-API were last updated on 2021-05-12 at 20:39. Product prices and availability are accurate as of the date/time indicated and are subject to change. Any price and availability information displayed on Amazon Site at the time of purchase will apply to the purchase of this product.

The D3400 is an excellent camera for getting started with DSLR photography. But now that it has been replaced with a newer model, it will become increasingly hard to find in stores.

Some good places to look for new D3400s are Amazon and B&H Photo.

Popular Lenses for the Nikon D3400

Popular Accessories for the Nikon D3400