The Nikon D7500 has pretty good battery life with basic shooting, although it goes down drastically if you’re using the back screen a lot, using lenses with vibration reduction, or are shooting in very cold conditions. So there are definitely times that having a spare battery on hand can come in very handy so that you don’t get caught out with a dead battery and camera that can’t shoot.

So here’s a rundown of some of the best options for picking up replacement batteries and chargers for the Nikon D7500.

The battery that the camera comes with the Nikon D7500 is model number EN-EL15a. It’s the same model used in some other Nikon cameras, such as the D850.

The older EN-EL15a batteries will also work, so if you’ve got those on hand from other cameras, you can go ahead and use those. But if you have a choice of buying the EN-EL15a or the EN-EL15 in the Nikon original batteries, go with the newer “a” version. They’re more efficient and they have improved protection against an overheating problem that led to a voluntary recall of some older batches of the EN-EL15 batteries. (You’ll often find that after-market alternatives drop the “a”).

It’s also worth buying from a reputable retailer. Just as with memory cards, there are counterfeit batteries on the market in some places.

After-Market Batteries and Chargers for the Nikon D7500

The Nikon original batteries work well, but they’re not cheap. So some other manufacturers have stepped in to offer good-quality alternatives at lower prices. The batteries have fundamentally the same specs–some of them are rated for slightly higher capacity up to 2100mAh rather than the 1900mAh of the original Nikon battery, but they do fundamentally the same thing without offering any extra features. But some of the third-party chargers do offer different configurations and features that can come in useful.

There are a number of manufacturers who make cheaper after-market batteries, and in my experience some of them are very good. But some are definitely better than others. The ones below are all from brands I’ve used personally and have had good experiences with their products.

Wasabi Power specialize in cost-effective alternative batteries and power supplies. Having used many of their batteries in recent years I’ve found them to produce excellent products at compelling price points. You can buy several of their EN-EL15-compatible batteries for the price of one Nikon original.

Watson is one of the brands owned by B&H, and I’ve found them to produce good products. This is a straight replacement for the EN-EL15 battery, although it is higher-priced than the Wasabi one above. 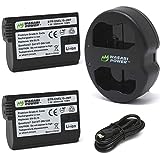 Wasabi Power Battery (2-Pack) & Dual Charger for Nikon EN-EL15 & D500,...
Check Price at Amazon
This includes two of the Wasabi batteries mentioned above as well a 2-battery charging doc. It charges via USB (and includes the micro-ISB cable). 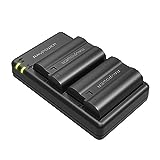 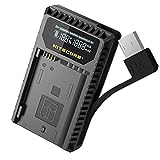 Nitecore UNK1 Digital USB Camera Charger for Nikon Batteries EN-EL14,...
Check Price at Amazon
This is a small, very portable USB charger that works with EN-EL15a batteries. And it’s actually a dual charger–there’s a dock on each side of it–but only one side is for the EN-EL15a batteries. The other side is for EN-EL14a batteries. So if you’re shooting with more than one Nikon camera model and use both EN-EL15a and EN-EL14a batteries, it’s a dual charger, but if you’re shooting only with a D7500 then it’s a single-battery charger.

Because this charges with the USB standard, it opens up more flexibility than the AC-only options. You can charge it with a standard USB-AC wall adapter. You can plug it into a USB car charger. And you can plug it into mobile USB powerbank for true on-the-go charging.

It also has a small LCD screen that gives you status information, etc. It doesn’t come with a battery

I’ve previously posted a detailed review of this charger. One of the things I like most about it is its size. It’s about half the size of the original Nikon MH-25a charger, which might not matter all the time, but when I’m packing very light for a travel shoot every little bit counts. And for that reason, it has become a go-to charger in my travel kit.

The key feature of this charger is its compact size. It’s a single-battery charger with a flip-out AC plug to go into the wall and also comes with a DC car charger. The USB port on it is an output, so you can use it to charge other devices. 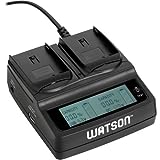 Watson Duo LCD Charger with 2 EN-EL15 Battery Plates
Check Price at Amazon
The Watson Duo Charger is a modular system that can charge two batteries simultaneously. The genius of the system lies in the modular plates. You can mix and match plates for a whole range of modern camera batteries.

This is my favorite charging dock at home. It’s a little bulkier than some others, so I don’t tend to pack it when traveling. Some time ago I posted a detailed review.

When buying, make sure that it’s coming with the plates you want, because it’s sold with a bunch of different configurations for different batteries. You can also pick up the plates separately.

Images and product information from Amazon PA-API were last updated on 2021-06-22 at 17:59. Product prices and availability are accurate as of the date/time indicated and are subject to change. Any price and availability information displayed on Amazon Site at the time of purchase will apply to the purchase of this product.