There are plenty of 24-70mm lenses available; it’s a standard option from many lens manufacturers. And when you put them on full-frame cameras like the Nikon Z7 or Z6, you get basically the same perspective from each.

The perspective you get from each end of the zoom range of the lens I’m focusing on here—the Nikon NIKKOR Z 24-70mm f/4 S—is basically the same as other 24-70mm zooms. So if you’ve used other lenses at those focal lengths, you’ll have a good idea of what to expect.

But I’m posting these practical examples here for anyone curious about whether this lens is going to be the right fit compared to another zoom lens. These aren’t inexpensive lenses, after all, so it might be helpful to have some real-world examples of how much zoom range you can expect to get when shooting with it. I’ve posted some more general sample images separately.

So I’ve shot some simple examples from the same shooting position. For each pair, there’s one shot at 24mm and another a 70mm. They were all shot on a Nikon Z7.

What size lens filters does it take?

What lens hood does it take? 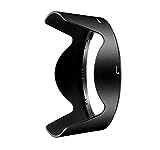 What is its minimum focusing distance?

It has a minimum focusing distance of 0.99 ft. (0.3m) from the focal plane. That applies at zoom positions.

What are its maximum and minimum apertures?

What is that smaller lens ring for?

You’ll notice two rotating rings on the lens. The broader one is for the zoom. The narrow one nearer the camera body is actually programmable. By default, it’s set to control manual focusing. But you can change that to aperture control or exposure compensation. I’ve put together a quick guide separately.

You can find the Nikon Z 24-70mm f/4 S at B&H Photo sold individually or as part of a kit with the Nikon Z mirrorless camera bodies. You can also find them at Adorama and Amazon.

You can also rent them at and LensProtoGo.

And while it’s still quite a new camera and there aren’t many on the used market, it’s still worth looking at KEH if you’re in the market for a used copy.

Images and product information from Amazon PA-API were last updated on 2021-08-04 at 20:59. Product prices and availability are accurate as of the date/time indicated and are subject to change. Any price and availability information displayed on Amazon Site at the time of purchase will apply to the purchase of this product.