You can get some remarkably good photos with mobile devices these days. The camera function might be a secondary feature of them, but the cameras are still very good.

But nearly all of them have a fixed lens. It’s a compromise focal length that’s not wide and not zoomed in. It works well for a wide variety of shooting situations, but it’s still somewhat limiting.

What if you want to shoot a close-up with a macro. Or zoom in with a telephoto. Or get a wide-angle perspective. For those, you need to have something modify the view from the built-in lens.

That means using a snap-on lens. They go over the top of the existing lens, so the light goes through the snap-on lens first and then through the built-in lens before hitting the sensor and recording an image in the form of a still photo or video. 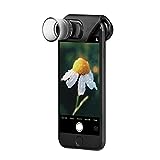 olloclip - Macro Pro Lens Set for iPhone 7/7 Plus & iPhone 8/8 Plus I...
Check Price at Amazon
I’ve long used the OlloClip wide-angle and macro lenses for the iPhone 6, and I’ve posted a detail review of those before. But since upgrading to the iPhone 7 last year, those lenses won’t work.

Now that OlloClip has come out with new models for the iPhone 7 and iPhone 7 Plus I’ve been using the Macro Pro Lens Set, especially for extreme close-ups when tracking the development of the buds of DC’s famous cherry blossoms as they move closer to blooming. Here’s my take on these lenses.

There are several different combinations of lenses that are available from OlloClip. Since I was most interested in close-up photos, I went with the Macro Pro Lens Set.

It includes three lenses in one: a 7x macro, a 14x macro, and a 21x macro. They clip onto a plastic mounting clip that slides over the top of your phone and goes over the built-in lenses. And it goes over both lenses, meaning that you can use either the iPhone’s front or back camera.

Because the Olloclip adds lenses rather than replacing them, it does make the photos less sharp, and that’s amplified by the natural distortion of most extreme close-up lenses like these. In general, the center of the frame remains quite sharp, but it can drop off quite a lot at the edges.

One of the selling points of the Olloclip is that it’s portable. You’re not going to want it attached permanently to your iPhone. It’s too cumbersome for most pockets, and it’ll come off easily. So it comes packaged with a lanyard and docking clip to make it “wearable” when you’re not using it. It’s not something I tend to use, but it’s there if you want it. A more useful feature, though, is that the storage clip can fold out to create a tiny tripod bracket for your iPhone.

Shooting with the Macro Lenses

Shooting close-up macros can be finicky at the best of times. It’s doubly so when using something handheld like a phone. The problem is there is an extremely narrow plane where the focus is sharp. And because it’s not really designed for it, the iPhone’s camera has a very narrow range for focusing. So even the slightest movement can throw that out of focus.

You have to get the lens very close to the subject. As in, an inch or less. If you’re too far back the camera simply won’t be able to lock focus–it’ll just all be a blurry mess. A side-effect of that is that you’ll often be blocking the light from shining on whatever it is you’re trying to take a photo of, so you often need to get creative with your angles.

Here are a few examples of the kind of close-ups you can get with these lenses. I have many more examples here.

It comes with the slot-in lenses, the main mounting frame, lens caps, translucent lens hoods, a convertible stand/pendant holder, and a lanyard.

There are a few things to factor in when using the OlloClip macro lenses.

To get the most out of it, you want the main subject of your shot to be in the middle of the frame.

To use the macro you need to be very close to your subject. That’s not going to work with some subjects, and in others it might block the light from reaching the subject.

The edges of the frame will almost certainly be blurry even if the middle is sharp. That’s less of an issue if you’re cropping off the edges when posting square photos to something like Instagram.

The Olloclip also covers the flash. So you’ll want to turn that off. I keep mine off all the time anyway.

And if you have your phone’s screen set to adjust its brightness automatically (Settings > Display & Brightness > Auto-Brightness), the Olloclip goes over the light sensor, so your screen will dim. This only affects the viewing screen and not the camera exposure. It’s not a huge issue, but it can be an annoyance in bright shooting conditions when you’re trying to frame your shot and see if it’s in focus.

Unless I’m using the phone on a tripod or some other still mount, I find the camera’s built-in burst mode invaluable as a way to make sure that at least one photo is actually in focus. It involves a little more editing to go through and find the shots and cull the others, but that’s vastly better than coming home with entirely blurry photos.

Will it work with video?

Yes, no problem at all. There’s nothing extra to set or do.

Does it work with my phone case?

This is going to be a deal-breaker for many people (and is close to one for me), but no, it won’t. Because of the snug fit, the lens frame won’t mount over your case and preserve the right distance to keep things in focus.

There is one very specific exception. OlloClip is putting out its own dedicated case that is compatible. But as a I write this it’s not yet available.

Does it work with a screen protector?

So long as your screen protector is no thicker than 0.5mm, it will apparently work.

Where to Buy the OlloClip for iPhone 7

I bought mine at B&H Photo. They can also be purchased at Amazon.

Images and product information from Amazon PA-API were last updated on 2020-10-22 at 14:49. Product prices and availability are accurate as of the date/time indicated and are subject to change. Any price and availability information displayed on Amazon Site at the time of purchase will apply to the purchase of this product.