I’m a long-time Nikon shooter and have always tried to use Nikon glass when I can. I have owned a couple of Sigma 10-20mm lenses, a focal length that Nikon didn’t have in their own range at the time but has since added. I’ve found them very useful for a number of purposes over the years, especially timelapse shoots.

But it’s only recently that I’ve been trying out some of the new generation of Sigma lenses (you can find my other reviews of them here).

I’ve been impressed so far. That they’re often priced under Nikon equivalents doesn’t make them cheap imitations or knock-offs. They’re high quality, well-built lenses in their own right. And the optical performance has been excellent.

For this latest Sigma lens review I’ve been putting the Sigma 24-35mm f/2 through its paces. I was using the version for Nikon mounts. There are also versions for Canon and Sigma mounts. Its manufacturers suggested price is $999.

The focal length is in the range of one I use often. I probably use my Nikon 24mm f/1.4G more than any other lens I own for travel work. I like the wide perspective of 24mm and that it encourages you to get in close. It works wonderfully for landscapes, both urban and non-urban. And although it’s ideal for traditional portraits, it can work very well for environmental portraits where you’re adding context in the frame. If I had to choose one lens I had to stick with for the rest of my travel photography shooting I’d probably choose 24mm. And 35mm might be about the most versatile single focal length for general travel photography, street photography, and photojournalism shooting.

So I was very interested to try out the Sigma 24-35mm f/2. It adds a little extra zoom reach but is still very fast for low-light photography and for isolating on a focus point and blurring the background. At f/2 it’s faster than the defacto standard “pro” speed for zoom lenses of f/2.8. Although the number is only 0.8 smaller, that corresponds to a whole stop difference. And it maintains that f/2.0 through its entire zoom range, from 24mm to 35mm.

After using it for a few weeks, here’s what I found. As always, I’m much more concerned with real-world use than lab tests.

The PR teams for camera manufacturers love a good acronym or three. The formal name of this lens is the Sigma 24-35mm f/2 DG HSM Art Lens. Here’s what all that means, decoded:

The lens feels solid and substantial. Much of the barrel is metal. It feels like a “pro” lens should in the way that I don’t think the new Nikon 24-70mm does, even though the Nikon is about 2 1/2 times the price. And while it’s not a light lens for its size, it does feel as though it holds up well to the usual handling on the road.

The zoom is entirely internal, so there’s not external movement as you zoom through the range. That’s good if you’re using a filter where orientation matters, like a circular polarizer or a graduated neutral density filter.

At f/5.6 and smaller I found it to be extremely sharp. At f/2 it was less so, which isn’t surprising since lenses are rarely at their sharpest wide open.

Here are some examples at f/8 and f/16 where you can see that the sharpness even at the edges of the frame is pretty good, although there is definitely some softening in the corners (click on the image to open at their original sizes).

There’s pretty heavy vignetting at the widest apertures that is basically gone by around f/5.6 or so. Here’s an example:

There is some green and purple fringing when you push it hard, but I was surprised by how little there is. You can see an example in top corners in this image:

I’ve posted a collection of photos taken with the Sigma 24-35mm f/2.0 separately.

It also comes with a dedicated lens hood and its own soft case that offers decent but not outstanding protection.

Overall, I found the lens very good. There’s no vibration control, and it’s straightforward to use, but it is compatible with Sigma USB dock system that you can use for focus calibration and firmware updates.

The area that I was least impressed with was the auto focusing. I found that it sometimes had trouble locking onto the focus even of static objects, and at other times I couldn’t be sure that it had found focus without checking the focus readout at the bottom of the viewfinder screen. This was on a Nikon D810, so the camera itself has a good focusing system. To be fair, Sigma has designated this lens in its Art series, so its focus is not designed for fast moving targets. But I was underwhelmed by its performance even on still objects.

But once it had locked on focus, the optical performance was generally very good with a few weaker areas. The vignetting at wide apertures is pretty heavy, and focusing at infinity at f/2 wasn’t as sharp as it could be. But from around f/4 those issues start to disappear.

For me, the Sigma 24-35mm is not going to replace my trusty Nikon 24mm prime, but it’s nonetheless a tempting option at a very good price-for-performance ratio and one that I would be definitely consider if/when I have to replace the 24mm. With a constant maximum aperture of f/2 combined with a relatively wide angle of view, it makes for an excellent low-light lens.

There are versions for Nikon, Canon, and Sigma mounts, all with a manufacturer’s suggested price of $999. 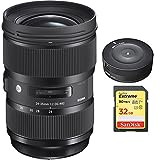 Images and product information from Amazon PA-API were last updated on 2021-01-21 at 14:09. Product prices and availability are accurate as of the date/time indicated and are subject to change. Any price and availability information displayed on Amazon Site at the time of purchase will apply to the purchase of this product.