Here's a collection of photos I've taken with the Sony HX99 focusing specifically on its highest ISO range of 1600 to 6400.

I’ve previously posted a detailed review of the Sony HX99 compact camera as well as a more general (and larger) selection of images taken with the HX99. While the HX99 is not necessarily the first camera that comes to mind if you’re getting one for low-light shooting and isn’t likely to be the driving reason for choosing this particular camera, I nevertheless thought it worth posting a selection of sample images focusing specifically on the HX99’s image quality at high ISOs.

The HX99 is a very small compact camera and has a tiny sensor to match. So its performance is never going to match some of the low-light leaders like Sony’s Alpha series cameras or larger full-frame DSLRs or even mirrorless cameras with APS-C sensors–it would be unrealistic to expect that, and if that’s what you’re aiming for, you’re frankly likely to be disappointed.

In shooting with the HX99, I can’t help but wish that its low-light performance was better. When I’m pulling out a camera on my travels, I want something that’s not just going to work well in bright, sunny conditions outside but also one that’s going to work well in a smoky and poorly lit morning market, inside a beautifully decorated mosque, or with a street scene at night. 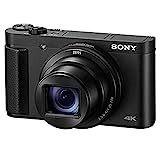 On the one hand, the HX99 has built-in optical image stabilization. That helps. On the other hand, it has a relatively slow maximum lens aperture of ƒ/3.5-6.4 (the lens’s party trick–the massive zoom–is, after all, a key selling point and the natural priority). As a potential alternative to something like Sony’s own RX100 series or the Ricoh GR III–both of which are admittedly at least double the price–the HX99 doesn’t really compete.

Yet it still performs better than other cameras I’ve used of this type and remotely at this price point. There is certainly image noise, and sharpness suffers. But you also don’t get some of the other negative effects to the same extent that you see on some other cameras. The dynamic range and color fidelity do suffer, but they don’t drop off a cliff. And, overall, if shared in relatively small sizes, such as on social media, the images still look very good.

Here are some practical examples that hopefully will help you make your own judgment.

Most of these were shot in RAW, but a few were shot originally in JPG. For several reasons, I generally shoot in RAW when it’s available. In this specific case, I don’t really like the in-camera processing that’s done to JPGs shot in high ISOs. In trying to improve the effects of the high ISO, it gives it a murky, waxy look that, for me at least, looks like a step in the wrong direction. I prefer the RAW versions with their grainier but sharper look. These have been processed in Lightroom, but I’ve not applied any extra noise corrections beyond the Lightroom defaults (Luminance: 0; Color: 25; Detail: 50; Smoothness: 50).

Each image has the ISO it was taken at in its caption. And you can click on each image to open a full-resolution version.

Where to Find the Sony HX99

You can find the HX99 at Amazon and B&H Photo. 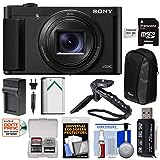