Bumpy, jumpy video just doesn’t look good. While there are all sorts of ways to smooth out and stabilize video, most of them are designed for cameras rather than smartphones. But, let’s face it, more than a few of us shoot a lot of video on our smartphones these days.

The better smartphones have built-in electronic stabilization. That certainly helps, but there are limits to what it can do. It works best against small jittery motion. It often doesn’t work as well to help smooth out panning or larger motion.

That’s where the SMOOTH-XS smartphone stabilizer comes in. And it has a few other tricks up its sleeve, too. The folks from Zhiyun sent me one to try out, and I’ve been putting it through its paces. 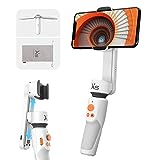 It is fundamentally a stabilizer that helps you smooth out video you’re shooting with your smartphone. And that’s its most important feature. But it’s also a camera grip, giving it a much more comfortable way to hold your camera than the usual awkward hold. And the built-in direction and zoom controls add not just convenience but a smoother way to make those changes while shooting. And the base of the grip has a standard tripod thread, so you can attach the low-profile tripod legs that come with it or attach it to a selfie stick or other mount. So it’s really quite a versatile accessory.

With the phone horizontally. In this image, the phone is not in a case.

Your camera goes into the spring-loaded mount at the top. It’s designed to be widely compatible, and it works with at least some phone cases–it worked with mine, which is fairly slim. But thicker cases probably won’t lock in securely.

The spring-loaded clamp expands to hold phones of different widths.

The swivel base below that feels like a simple free-flowing swivel base when the power is turned off, but it’s when you power up the device that you start to feel the gimbal magic. Using sophisticated electronics, the device will try to smooth out lateral movement. It’s worth mentioning that this is primarily a gimbal for lateral movement, and it has fairly limited effectiveness against vertical movement. If you need that, there’s a higher model in the range that offers 3-axis stabilization.

If you haven’t used a gimbal before, it’s quite uncanny how it can hold the screen flat and smooth even if you rock the grip from side to side.

This is really a two-part device. One part is in the box and you can hold it in your hand–the SMOOTH-XS. The other part is the app. You need both parts working together.

To use the device, you’ll need to activate it with the ZY Cami app. I’m using it on an iPhone and found the app with a search in the app store.1 It took me a couple of tries to get it set up correctly—there are several steps that, though relatively straightforward, aren’t as intuitive as they could be. There’s room for improvement in streamlining this process somehow.

But once you have it installed and connected to the gimbal, you get a host of features available. Shooting is done through the app, and you get the usual options like photo and video, but also some others, such as panorama and hyperlapse. There are a number of on-screen options for things like the video settings, adding effects, or adding text.

One of the main reasons for connecting the app to the gimbal in the first place is that it will enable those orange controls on the grip (they won’t do anything without the app). They work via the Bluetooth connection. There’s a record start/stop button, a zoom in/out slider, and small joystick-like controller that lets you rotate smoothly in two directions. There are also features that help you control the kind of tracking you want, which is especially useful for shooting selfie videos.

The main direction and recording controls. They’re easily accessible with thumb control when holding the grip.

The zoom slider. It’s positioned in such a way that it’s easy to operate with your right thumb as you’re holding the grip.

And once you’ve recorded your footage, there’s a bunch of ways you can jazz it up, with effects and simple editing tools in the app. While you’d get more powerful control editing those in a full-blown video editing suite, the one-stop convenience of doing it right from the app means that you can share it on social media that much more quickly and get on to your next social hit.

Overall, it’s a neat device that I’ve found to work well. For me, the main appeal is in the smooth video and the more convenient controls and grip. The post-processing features are not ones that I’ve used heavily, but they look impressive.

It has a built-in, non-replaceable, rechargeable battery. It charges via a USB-C cable. It doesn’t come with a wall charger, but you can use an existing one or other standard USB power source such as a mobile power brick.

The instructions are adequate, but there are some odd translations; for example: “Slide down the pan axis motor to the bottom of the vertical arm until a clatter is heard.”

Shooting through the app, which requires the Bluetooth connection for the controls, will drain your camera’s battery more quickly than usual. That’s not much of an issue for short bursts, but will become more noticeable with longer footage.

The bottom has a standard thread for a tripod connector, so you can attach it securely to other mounts as well as the included mini-tripod.

You can find them at Amazon. The SMOOTH-XS is compact enough that it’s easy to take along on your travels (or someone else’s, if you’re getting it as a gift). And because it works as a tabletop tripod, it’s especially handy for photos and videos when you want to be in the shot.

Images and product information from Amazon PA-API were last updated on 2021-02-27 at 23:39. Product prices and availability are accurate as of the date/time indicated and are subject to change. Any price and availability information displayed on Amazon Site at the time of purchase will apply to the purchase of this product.