An Oasis in Texas

AUSTIN, United States — Austin is a city that’s young, fun, and takes pride in being a bit off-kilter. 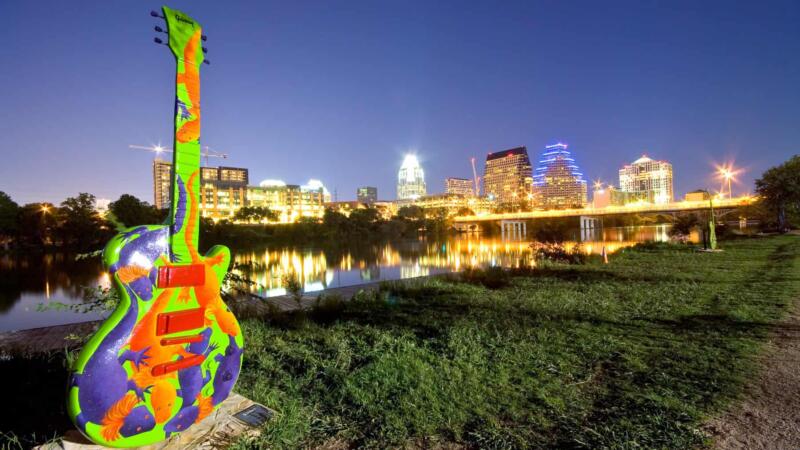 “How many Austinites does it take to change a light bulb? Four: One to change the bulb, and three to talk about how cool the old one was, before the yuppies came along and changed it.” [Joe Yonan, “Austin, Tex., Keeping It Weird,” Washington Post, 14 January 2011.]

Austin is a city that’s young, fun, and takes pride in being a bit off-kilter. It takes being off-beat probably more seriously than any place I’ve ever been. Lots of places are a bit off-kilter, but Austin has elevated it to an art form, self-consciously pushing it as the key to Austin’s identity. For a visitor that presents both a draw and a problem.

Chances are that by the time you hear about such and such bar/barbecue joint/music venue, you’ll inevitably hear that it was way cooler before anyone knew about it and that now it’s just another place fallen victim to tourism.

I love Austin, but it’s definitely a place that’s hard to wrap your arms around as a visitor. And I’ve always thought it was a place that’s definitely at its best after-hours, with a great climate that lends itself to outdoor eating and drinking and just taking it in pretty much year-round (although July and August are–there’s only one word for it: hot.)

It’s become a cliche by now to say that Austin is something of an oasis, but then cliches usually have truth to them. It’s something that’s reflected politically–aside from the Democratically-leaning heavily Latino counties close to the Mexican border, Austin is a rare blue island in an otherwise red state. That political lean is also reflected culturally, and locals boast that it’s not like the rest of Texas. The bumper sticker-friendly and T-shirt-appropriate unofficial city motto, since coined by an Austin Community College professor a decade ago, has become “Keep Austin Weird.” It’s a place that romanticizes the kitschy, revers the weird, and celebrates the downright odd. It is, in short, a place that loves kitsch for kitsch’s sake.

It’s also a place that takes music seriously. The annual SXSW (South by Southwest) festival, and Austin City Limits music festival build on a long local tradition of live music and invention, and musical luminaries like Stevie Ray Vaughn have called Texas home. All of this fun is underwritten by a healthy median income dragged up by some major local companies like Whole Foods (before they were bought out by Amazon) and Dell Computers whose “Dellionaires” have played an important role in sustaining Austin’s growth in recent years. And being the capital of Texas and home to the University of Texas at Austin–the largest employers in the area, it’s a place with a strong combination of lucrative and stable jobs. It all makes or a winning combination, and it’s no wonder that so many people become so enamored of the city.

One of the things I love most about Austin is Town Lake, a smallish lake shaped more like a river than a lake that sits adjacent to the downtown district and ringed by a running/walking track (thanks, in large part, to the beautification campaign championed by former first lady, Lady Bird Johnson–she and her husband lived nearby). It’s always one of my first stops. It’s a fantastic place for an early morning or late afternoon run or walk or just to relax and watch the warm glow of the sunset give way to the lights of downtown.

The dry warmth of the twilight hour lends bring locals out in droves with their dogs and their kids and themselves. There’s a great view of the city lights reflecting on the water, and if you time your visit right you’ll see the swarm of a million or more bats depart from under the Congress Avenue bridge for their nightly foraging, something that reminds me an awful lot of Brisbane and Sydney’s even swarms of flying foxes. And you’ll see pretty quickly why Austin ranks in the top 10 fittest cities of the United States.1 From the far bank, the city lights are set off beautifully by the reflecting water and the dusk sky.

An Oasis in Texas